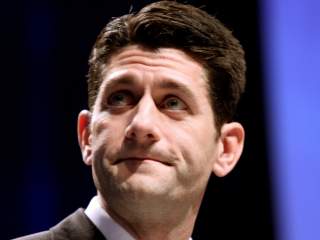 Paul Ryan last week spoiled Donald Trump’s brief honeymoon as the Republican Party’s presumptive nominee. As former rivals like Rick Perry, Rand Paul, and Marco Rubio offered their support for the man who beat them—they all had pledged to back the nominee, whoever it might be—Ryan issued what amounted to an informal ukase directed at Trump: when it came to accepting his candidacy, Ryan declared that he was not there yet.” Trump may have millions of voters behind him. No matter. So now Trump is threatening to do to Ryan what he did to Jeb Bush earlier this year--severing the head from what’s left of the GOP establishment. Trump’s declaration Sunday that he and other wealthy Americans are ready to pay higher taxes was a direct shot at Ryan and GOP conservative orthodoxy. “I may have to increase it on the wealthy—I’m not going to allow it to be increased on the middle class,” he told CNN on Monday. Trump also appears open to raising the minimum wage. He is further signaling to working-class Americans that he will not govern as a conservative in the mold of Ryan or his hero Ronald Reagan. Trump is a populist who holds no brief for traditional conservative tenets. He aims to turn the GOP into his own political party on both domestic and foreign policy, radically breaking with the party’s longstanding positions.

It’s not that Trump will cause Ryan to lose his House primary in August, although Trump surrogate Sarah Palin said Sunday that she “will do whatever I can” for his opponent, Paul Nehlen. “Paul Ryan and his ilk … feel so threatened at this point that their power, their prestige, their purse will be adversely affected by the change that is coming with Trump, and with someone like Paul Nehlen, that they're not thinking straight right now,” she told CNN’s Jake Tapper. Ryan, she warned, “is soon to be 'Cantored,' as in Eric Cantor,” referring to the House majority leader from Virginia who lost his seat in a primary upset two years ago. But even with Trump and Palin against him, Ryan is more secure than Cantor was—the latter fell afoul of redistricting that left him with a still very Republican district, but one without any emotional attachment to its representative. In a year when Donald Trump can become the Republican nominee, it might seem like absolutely anything can happen—but Ryan is still about as safe as any incumbent can be.

Trump himself on Sunday raised the prospect denying Ryan his expected role as chairman of the Republican National Convention in Cleveland. Ryan, however, might well relish the opportunity to distance himself—and his potentially jeopardized House majority—from the controversial nominee. In any event, the convention is largely symbolic. It’s what lies behind the symbolism that poses the threat to Ryan: the reality that Trump is prepared to defy any authority in his push to remake the GOP in his own image.

“I’m going to do what I have to do—I have millions of people that voted for me, so I have to stay true to my principles also,” Trump said on ABC’s This Week. “And I’m a conservative, but don’t forget, this is called the Republican Party. It’s not called the Conservative Party.”

Trump’s success so far in co-opting or crushing every major right-wing ideological bloc in his march to the nomination has been astonishing to behold. He not only ended, for now, the Bush political dynasty that personified the Republican establishment from the day Reagan left office, he also routed the neoconservatives’ golden boy, Marco Rubio; the libertarians’ champion, Rand Paul; and, most impressive of all, the candidate around whom all movement conservative opposition coalesced, Ted Cruz. Trump marshaled more votes within the party than any of the movements and ideological interests long supposed to hold a commanding grip on the GOP. Trump has done to the GOP what Attila the Hun did to a crumbling Roman Empire.

Ryan, by contrast, is no conqueror: if he didn’t quite inherit his position, he was heavily sponsored and promoted all along the way by kingmakers inside the party. He was hailed by conservative pundits as the new Jack Kemp—a flattering comparison, until you consider how far short of presidential expectations Kemp, at bottom a political loser who fancied himself a new Gipper but was nothing of the kind, fell.

Like Kemp, Ryan has been also been a vice presidential nominee on a Republican ticket that no one would point to as an example of how conservatives should win elections. Ryan was marketed in 2010, after Republicans retook the House of Representatives, as one of three “Young Guns” who held the party’s future. (Fred Barnes had given them this name three years earlier in a cheerleading story for the Weekly Standard.) Unfortunately, the other two of these three amigos happened to be Eric Cantor and the man who succeeded Cantor as House majority leader, Kevin McCarthy, whose aspirations to the speakership collapsed suddenly last year, leaving Ryan—reluctantly, so he insisted—to take up the gavel.

That reluctance stemmed in part from the ungovernable character of the Republican Party these days, even as it exists within the halls of Congress. Ryan’s predecessor, John Boehner, resigned when it became apparent he could not indefinitely fend off attacks from the party’s right. Ryan can take some comfort from the fact that Trump seems ideologically incompatible with the House Freedom Caucus that played a large role in toppling Boehner—but then, Ryan himself fell short of receiving the Freedom Caucus’s formal endorsement for speaker last year. (Most Freedom Caucus members supported him, but the lack of full endorsement from the group served as notice not to take its loyalty for granted.)

Trump and Ryan are antitypes: Trump is unorthodox where Ryan is a party-line conservative; Ryan has a reputation as a policy wonk, while Trump is a rumbustious improviser; and Trump has wrested leadership away from the party elite in the most hard-fought presidential contests in the party’s modern history, while Ryan has been groomed for leadership over a decade or more. Who wins when they clash—not just over the convention or Ryan’s tardy endorsement, but over their visions for the party and the country? Ryan has to look with apprehension not only at Trump’s successes but also at the foreshortened leadership careers of Cantor, McCarthy, and Boehner.

Trump might prove to be a passing fad, gone from the national stage after losing to Clinton in November. Maybe the GOP reacts to such a loss by turning to Ryan—and returning to Romney-Ryan conservatism—as its savior. But looking at everything that’s happened to the party since the George W. Bush administration, how appetizing, let alone likely, does that seem?

By stages, the Republican Party is inexorably evolving from a conventional Ryan-like conservative party into something very different. Karl Rove, call your office. With the Tea Party, the GOP remained conservative in ideology but became radically anti-establishment in temperament. Trump has capitalized on that anti-establishment temper while jettisoning the old policy priorities, and voters have embraced the change.

Is there a place for Paul Ryan in this new party? The answer will depend on how many of Ryan’s House colleagues are already prepared to make the switch. Dozens have the Trump temperament already. How long before they adopt the Trump program, too? The answer to that may be the same whether Donald Trump or Hillary Clinton is sworn in next January. The Ryan era was over before it ever began.