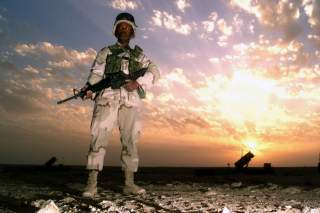 In the aftermath of the horrific Paris attacks, there are growing calls in the United States to deploy conventional troops into Iraq and Syria to militarily defeat the Islamic State (ISIS). These calls represent the latest installment of foreign-policy opinion makers’ proclivity to default to the military to solve every complex international problem. But in light of the apparent rising threat ISIS represents, is it time, however unpalatable, to consider sending in ground troops to destroy them? The response depends on the desired outcome.

If the objective is to diminish the threat to America posed by ISIS, the answer is a resounding “no.”

There is actually considerable and recent experience to demonstrate why trying to use foreign combat troops to destroy insurgent forces will not work. In 2001, the U.S. sent special forces and provided air power to local fighters to destroy the Taliban. In 2003, the U.S. invaded and wiped out the army of Saddam Hussein. In 2006, Israel launched a ground and air assault into Lebanon to destroy the military wing of Hezbollah. In all cases, the use of overwhelming military power was devastating against the far weaker irregular enemy.

Yet, after hundreds of thousands of U.S. ground troops fought in Afghanistan, the Taliban is stronger today than at any time since 2001. Hezbollah survived the 2006 attack, ultimately forcing the Israeli military to withdraw. The U.S. deployed 187,900 at the height of Operation Iraqi Freedom (OIF), yet that massive force succeeded only in temporarily weakening the insurgency. The surviving terrorists merely limped off to safer locations, melted into local communities where they couldn’t be identified and over time quietly rebuilt their strength. It seems to be lost on many of those who advocate sending in ground troops that ISIS was itself created out of the wounded-but-not-defeated remnants of Al Qaeda in Iraq, after the U.S. spent eight years fighting and dying there.

In July of this year, presidential hopeful Lindsey Graham boldly proclaimed that he would send 20,000 U.S. troops into Iraq and Syria to defeat ISIS. The troops are needed, he contended, because there “is no alternative to going in on the ground and pulling the caliphate up by the roots.” In explaining how he came up with 20,000 troops, he said he got advice from military experts. “I just don’t make these numbers up,” he said. I’m not sure who is advising the senator, but he might want to consider replacing them.

There is a stunning lack of understanding, among even those recognized as military experts, to understand what it takes to militarily win in a given environment against a specific enemy. It doesn’t take much examination to realize how those numbers of troops could not accomplish the objective of defeating ISIS.

Many of the key leaders of the Islamic State’s organization have many years of experience in fighting irregular battles against conventional troops. They know they don’t have to win a single tactical fight to win a strategic victory. The vast majority of the fighters believe rabidly in their cause and are willing—sometimes eagerly—to die in support of it; they will endure hardship and privation, yet continue fighting. Insurgents are frequently indistinguishable from the civil population. In virtually all locations where they hold power, ISIS embeds itself in areas filled with civilians. Any conventional attempt to route ISIS out would devastate large sections of the city’s infrastructure, kill some number of innocents and expose Western troops to charges of being indiscriminate killers.

Clearly, and understandably, Western leaders recognize that ISIS represents a legitimate threat and seek to eliminate or diminish it. The instrument of military power has become seductive to this current generation of senior leaders. They see how powerful and seemingly undefeatable the U.S.’ armed forces are, and it appears to be an effective means to destroy a violent enemy. But American leaders must stop making policy based on emotions and preferences. No matter how much they would like to militarily crush ISIS, if a sober assessment of basic battlefield fundamentals reveals there is virtually no chance to accomplish that objective at an acceptable cost, that tool can’t be used.

The problem of ISIS is far, far deeper than taking out some number of fighters. It has been more than a decade in the making, involves horrific political conditions in Syria and Iraq, and includes strongly held religious beliefs morphed with twisted ideology, a multi-sided civil war and complicated economic and cultural factors. That toxic mix is not going to be solved by deploying U.S. ground troops.

Until the underlying causes are addressed, any attempt to solve the problem of ISIS by killing enough of their fighters will almost certainly backfire. What would be the benefit of losing thousands of Americans killed and wounded to potentially weaken ISIS, only to see them limp off to rebrand themselves into yet a new form?

Daniel L. Davis is a widely published analyst on national security and foreign policy. He retired as a Lt. Col. after 21 years in the US Army, including four combat deployments.  The views in these articles are those of the author alone and do not reflect the position of the US Government. Follow him on Twitter @DanielLDavis1.