South Africa Is a Weak Link in Global Counterterrorism 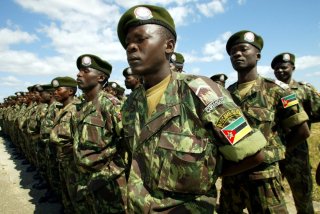 PEMBA, MOZAMBIQUE—Pemba is a bustling seaside town. Trade is robust, the fish is fresh, and the beer is cold. Luxury hotels dot the seaside. Although Pemba is an oasis, the town is only seventy miles from the frontlines of Cabo Delgado, a province that is an epicenter of the Islamic State insurgency.

When the Mozambique government invited the Southern African Development Community (SADC) to fight the Islamic State, South Africa set up the SADC Mission in Mozambique (SAMIM) headquarters in Pemba. But SAMIM’s headquarters is low-key and relatively unguarded, just a dozen yards and a flimsy fence away from one of Pemba’s main thoroughfares, suggesting a lack of seriousness.

The Mozambique government separately asked Rwanda to help secure the northern part of the province, where today several thousand Rwandan soldiers and police are fighting the Islamic State insurgency while mentoring their Mozambican counterparts.

The juxtaposition between the SAMIM headquarters and that of Mocimboa da Praia, a town 200 miles north that was once overrun by the Islamic State and now stations Rwandan Defense Forces, is stark. Pemba bustles while Mocimboa lays in ruins, lacking water, electricity, or any government services. Further, it literally and figuratively is on the frontline of the struggle to regain control over Cabo Delgado. In essence, the SAMIM commander, South African maj.-gen. Xolani Mankayi, leads from behind while his Rwandan counterpart, Maj.-Gen. Innocent Kabandana, sits on the frontline.

As SAMIM postures, the Rwandan Defense Force acts. For example, SAMIM maps curiously show ownership over areas of operation where local Mozambicans say they have never seen a single SAMIM soldier. Mankayi painted a rosy picture of increasing security but has not allowed independent assessments. Alternatively, Kabandana spoke candidly about ongoing operations in Chai and against Islamic State insurgents in Pundanhar forest.

SAMIM’s problem is less military, however, than political. Multilateralism brings symbolic legitimacy at the expense of cohesiveness. In SAMIM headquarters, I met not only South Africans, but also Botswanans, Angolans, Tanzanians, and Mozambicans—not all of whom entered the mission for the same reasons.

Unfortunately, today, South Africa appears to prioritize symbolism over substance. Although they patrol major roads and conduct aerial reconnaissance, they are more reticent to fight in the bush, where the battle must now occur. Prisoners I interviewed said it was common knowledge among the Islamic State terrorists that the Rwandans would fight while the South Africans would not. The problem is not with Mankayi but rather with his political superiors in Pretoria, as leadership in the South African government fears taking casualties far more than the Rwandans do.

But there is a more cynical component to South Africa’s inaction and ineffectiveness. Increasingly, South African president Cyril Ramaphosa appears to be replicating in Africa the strategy of Turkish president Recep Tayyip Erdogan in the Middle East and Pakistani prime minister Imran Khan in South Asia. Each rhetorically opposes the Islamic State and like-minded groups, but they all use them to justify their presence in areas they consider their “near abroad” while effectively allowing the terrorists a safe haven in exchange for mutual non-aggression.

That may sound ungenerous, but South Africa has established itself as an enabler of terror over the past few decades. The South African government, for example, is after Algeria, the greatest enabler of the Polisario Front that has fought a violent terrorist campaign against Morocco for control over Western Sahara. Yet, while they parrot the Polisario’s liberationist claims, they ignore its ties to Al Qaeda in the Islamic Maghreb and other groups seeking to use the smuggling routes Polisario controls. South African support has even extended to state-sponsored piracy, with attempts to seize Moroccan cargos to turn them over to the terrorist group.

As Rwandan (and American) diplomatic pressure has convinced states like Burundi and the Democratic Republic of Congo to stop harboring génocidaire leaders, many have found safe haven in South Africa. In both the Moroccan and Rwandan cases, the issue may be less ideological solidarity (unlike with the case of Hamas) and more a cynical desire to leverage terror support for diplomatic gain. South Africa today expects other African states to supplicate themselves to it and is willing to use terrorism to compel them to do it.

Whatever its motives, the results are clear: An empowerment of terrorist group that hampers rather than helps the fight against the Islamic State and other transnational terror groups. It is time both African states and the broader international community told South Africa’s leaders in no uncertain terms that they cannot have it both ways when it comes to terrorism.