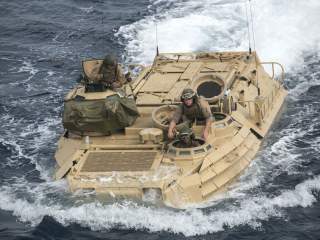 Exercise Balikatan 2016, a joint U.S. Pacific Command exercise with the Philippines that ended in mid-April, demonstrated important elements of an effective strategy to counter Chinese expansion across the South China Sea. And it’s certainly not too soon. China is expected to take preemptive action in the South China Sea before the UN Permanent Court of Arbitration announces its verdict in the Philippines v. China case, anticipated in late May or early June. Much has been done, and much remains.

Balikatan (meaning “shoulder-to-shoulder”) demonstrated U.S. and allied capability to operate ashore in a widely distributed, operationally resilient posture, employing aviation and ground weapons with the range needed to support forces operating at sea and in the air. The presence of Australian participants, and observers from Japan and other Asian countries, signals rising interest in the collective protection of accepted international law that governs access to international sea and air space. Secretary Carter’s visit and remarks to the forces ashore, followed by his visit to the USS John C. Stennis with Philippine defense minister Voltaire Gazmin, reinforced the potential of air-land-sea allied force integration. U.S. forces, including an A-10 “Warthog” element, along with Pave Hawk helicopters and associated capabilities, will remain. Joint U.S.-Philippine patrols began last month, and continued into this month. Hopefully, this heralds the beginning of a sustained U.S. presence embedded with its allies.

The ability to operate highly mobile, widely distributed forces, able to integrate long-range fires in support of naval and air forces well out to sea, is vital to the defense of extensive littoral areas along the first island chain. Mobility within a widely distributed posture offers a constantly changing target picture, despite the pervasiveness of surveillance means. A widely distributed and mobile posture also provides a response to weapons that are accurate at distance. Japanese observers undoubtedly drew conclusions, validating their current plans for a “western wall” and integrated air-land-sea maneuver capability in the Ryukyus. This posture is also ideally suited for long-term U.S. presence to help enhance Philippine capability in a politically acceptable—even welcome—manner.

There is no faster way to overcome cultural barriers than by having our young soldiers, sailors, airmen, Coast Guardsmen and Marines live and work with their counterparts, sharing bivouac, local food and capability development over an extended time. This is underway in Japan, and needs to be expanded, as recommended in the recent CSIS report “Asia-Pacific Rebalance 2025.” One recommendation, the creation of collocated Japanese and U.S. joint task-force headquarters elements in Okinawa, would greatly improve the development of alliance capabilities. Such a structure may also prove helpful in the Philippines.

Surveillance, particularly in the maritime domain, must be increased and expanded. Intelligence sharing, and the creation of a combined common operating picture, are closely related. Fishing vessels and other craft must be tracked, in addition to traditional naval and military vessels. The ability to police fishing areas, despite the presence of Chinese coast guard and maritime surveillance craft, must be developed and deployed. The United States must have solid means to enforce jurisdiction and administration of territorial waters and exclusive economic zones at the law-enforcement level, to help prevent escalation.

The widely publicized remarks of Secretary Carter and Lt. Gen. John Toolan, Marine Corps Forces Pacific Commander and U.S. Balikatan Exercise Director, show that candor is making a comeback. The United States should continue this trend by serving notice to the Chinese, privately at first, then publicly, that unless they can help in reducing tensions in the region (including restraining North Korea and lowering anxiety in the South China Sea), they will leave U.S. leaders with no choice but to reinforce their alliance capabilities. Then, the United States should do exactly that.

Military assistance is certainly needed, but reinforcing capabilities must also include building infrastructure along the South China Sea littoral. Ports and airfields are particularly needed for commercial and business development. These facilities are also available in the event of a contingency. Japanese investment in this area is now a prominent element in the region’s collective and common security.

One exercise is not the end of the United States’ work. It may only be a beginning. The steady, determined and businesslike creation of an indubitable capability to prevail is urgently needed. China’s leadership will not be able to publically compromise on this issue, or even be perceived to be cooperating. In 2009, the Chinese declared: “China has indisputable sovereignty over the islands in the South China Sea and the adjacent waters, and enjoys sovereign rights and jurisdiction over the relevant waters as well as the seabed and subsoil thereof.” Since then, this claim has been repeated often, and at all levels. We can therefore expect it to be a prominent part of China’s response to the expected tribunal verdict. The old Nike slogan of “Just Do It” seems to have assumed Chinese characteristics, in order to assert sovereignty over an area half as big again as the Mediterranean. Applying the term “historical sovereignty” to the entire South China Sea embeds this issue in China’s declared mission of recovering lost territory. This elevates the South China Sea to a survival-level interest for China’s leadership.

The Chinese leadership cannot compromise, let alone back down, without risking severe damage to domestic stability, including nationalist protests, and even the survival of the regime itself. The fates of the Qing Dynasty and the Nationalist regime are well remembered. The Chinese Communist Party has long claimed that U.S. China policy seeks to keep China contained. The leadership’s founding narrative includes rescuing China from the “century of humiliation” and commitment to recovering all of China’s lost territory. As a result, party elites and leaders cannot appear—to their peers or to the public—to be making sacrifices to satisfy the demands of other powers, particularly the United States and Japan.

The U.S. challenge is to maintain both deterrence and strong diplomacy. It requires degrees of skill and subtlety not often seen. U.S. allies must be reassured of America’s support, while China is reassured that the United States and its allies are not trying to keep China down.