South China Sea: It's Not Just About the Rocks, It's Also About the Fish 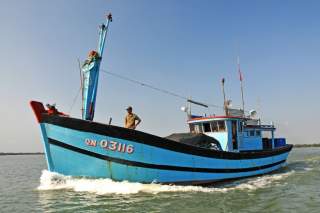 The South China Sea remains politically roiled. It has been almost a month since the UN Tribunal’s announcement. Chinese rhetoric attacks both court and verdict, military demonstrations continue and ASEAN’s foreign ministers issued a decidedly equivocal statement following their meeting. Secretary of State John Kerry’s request for a reference to the decision of the UN’s Permanent Court of Arbitration failed. China’s diplomatic efforts to moot the verdict, and by extension moot the UN Convention on the Law of the Sea (UNCLOS), achieved an early success. This dispute now enters a new—and not especially encouraging—phase.

China’s nationalist ambitions mandate the recovery of lost territory, specifically including islands, rocks and low-tide elevations deemed—by China—to be Chinese from ancient times. The July 12 judgment by the UN Tribunal was a stunning rebuke to this goal.

All nations on the East and South China Sea littoral and the United States are directly affected. But the stakes of the affected nations vary widely, as do capabilities and vulnerabilities. Standing alone there is little hope that the nations of the region can come to an acceptable, viable and enduring solution. The gaps among various national interests, stakes and capabilities must somehow be bridged.

The United States seeks to fly, sail and operate our forces wherever international law allows, and peaceful settlement of disputes. Japan is tied to the United States by virtue of our strong alliance, a geography that defines the East China Sea, current issues there, Chinese air and sea territorial intrusions and China’s continued vilification.

Directly opposed to this is China’s often stated “indisputable sovereignty over the islands in the South China Sea and the adjacent waters, and . . .  sovereign rights and jurisdiction over the relevant waters as well as the seabed and subsoil thereof.” This is now part of their nationalistic narrative demanding reversal of past violations of Chinese sovereignty.

Smaller nations along the South China Sea littoral, members of the Association of Southeast Asian Nations, are vitally concerned with free and secure access to traditional fishing areas in their territorial waters and exclusive economic zones. For most, fish is the major source of protein for growing populations. The smaller nations fear losing their major source of food. Potential oil and gas reserves, although unproven, add even more contention. Asia recalls well that resource competition leads to conflict.

An effective international strategy to protect free and secure access for all requires some unifying principle or goal capable of gaining support from the ASEAN nations, others along the East and South China Sea littoral, the United States, Japan, international organizations and public opinion. Prevention of a catastrophic collapse of the East and South China Sea fisheries may be part of such a unifying principle. An effective strategy, carefully and skillfully coordinated and executed, can ensure that the recent court decisions become part of a trend. We must make it part of a “line” and not a discrete event, a “dot,” and thus quickly forgotten.

July was a remarkable month. The court’s judgment was not the only disappointment for China. The Republic of Korea (ROK) agreed to the deployment of U.S. Theater High-Altitude Area Defense capability despite vigorous objections from China and North Korea. The ROK took this action in response to the most recent North Korean nuclear and missile tests. The ROK also closed the Kaesong Industrial Complex, one of the few and certainly the most significant instruments of cooperation between north and south. In response China threatened economic retaliation. In Korea, President Park promised government support to any Korean business damaged by Chinese punitive economic actions.

On July 12, the UN’s Permanent Court of Arbitration (PCA) announced its unanimous decision in the case filed by The Philippines over two years ago. Included in the decision:

• China was found in violation of the rights of Philippine fishermen

• China was found to have “…caused devastating and long-lasting damage to the marine environment”. This included the mining of coral that experts deem will take centuries to recover, if ever.

The UN decision may provide a foundation for settlement of disputes and the development of South and East China Sea resources—fossil fuels and fish—or it may become just a step on the way to continued coercion, escalation and conflict. Most likely is continued struggle, at a higher level. Japan has aptly termed this “Grey Zone Conflict,” a competition involving military and naval forces, civilians, maritime auxiliary forces, law enforcement, coercive diplomacy and information.

China already has de facto control over the South China Sea. Proximity brings many advantages. China’s extensive coastline, washed by both the East and the South China Seas, offers numerous ports and airfields supporting direct and immediate access of Chinese military, maritime auxiliary forces and fishing vessels to the seas. China’s massive investment in rockets and missiles distributed throughout their massive geographic sanctuary signals an intent to affect sea control and impose area denial from the land. Their pursuit of maneuvering ballistic missile warheads to attack large moving targets is another indicator of intentions.

China’s vast fishing fleets, increasingly under state sponsorship and control, are always close to their support structure. These vast fishing fleets, in cooperation with Chinese Coast Guard and Maritime Auxiliary resources threaten to shoulder Vietnamese, Philippine and other nation’s fishermen out of their fishing areas.

China’s South China Sea land building efforts demonstrate China’s ability and will to act as they wish in the South China Sea. Their new port and airfield outposts come at the cost of the destruction of vast coral reefs, the essential nursery of marine life, with as-yet uncalculated cost to sustainability of South China Sea and Pacific marine life. These new features testify to China’s ability to do what they please, their disregard for the welfare of others and their ability to exercise ever greater control. Support for military sea and air forces, maritime auxiliary and fishing fleets has now been extended well into the South China Sea and into the territorial seas of the other littoral states.

China’s traditional fishing grounds are severely depleted or even collapsed. Fisheries in the South and East China Seas are under increasing pressure. Fishermen range far from their nearby seas in search of catch. In 2013 and 2014 encounters in Korean waters between Chinese fishermen and Korean Coast Guard forces resulted in the death of a Korean Guardsman and a Chinese fisherman in separate incidents. Without some respect for sustainable fishing practices we will see more deadly competition and ever more pressure on already damaged fish populations

Experts predict major fisheries collapse in the area, leading to mass starvation. Professor John McManus of the National Center for Coral Reef Research at the University of Miami calls for an international protected zone similar to Antarctica. In his words, without this or some similar arrangement, “we are headed toward a major, major fisheries collapse . . .  that will lead to mass starvation.”

China’s Maritime Militia, managed by PLA military commands and funded by local and provincial governments, is successful and growing, as are armed Chinese fishermen. It is the world’s largest such organization. It was employed in the 2009 Impeccable incident, at Scarborough Shoal in 2012, and in support of exploration drilling in Vietnamese waters 2014. It has a publicly declared presence on new artificial features in South China Sea.

China seized control of the dominating narrative, at least where it counts—with their own population and those of their South China Sea neighbors. Repeated assertions of undisputed historical sovereignty, officially in communications with the UN and publicly in hyper-nationalistic media, raise the stakes considerably. The United States is consistently portrayed as the threat to regional peace and stability and as a violator of Chinese sovereignty. The United States is charged with “containment.” Challenges to ships and airplanes are becoming more aggressive. Surveillance missions, conducted lawfully from international waters and airspace now endure unprofessional “close aboard” intercepts and acrobatics. PLA Navy and Air Force units in the vicinity are gaining strength over time.

The Chinese narrative may now be driving the situation instead of describing it. Today’s situation in the South China Sea is increasingly identified with the Chinese Communist Party’s (CCP) mission to recover Chinese territory lost to the west—and to Japan—during the “Century of Humiliation” from the mid-nineteenth century Opium Wars to the CCP’s victory over the Nationalists in 1949. Victory over Nationalist, Japanese and Western forces coupled with economic growth since the rise of Deng Xiaoping largely form the justification of continued CCP rule. Given today’s economic challenges in China, including increasing violent unrest, the recovery of lost territory assumes even greater importance.