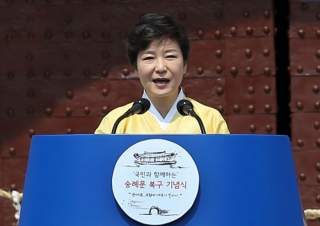 Japan–South Korea relations are seeing a glimpse of hope for change. While the two countries have allowed mutual affront to obscure shared interests, values and geography in the past few years, a recent talk by South Korean president Park Geun-hye signaled that a change is underway. On May 4, 2015, President Park expounded that South Korea will pursue a “two-track diplomacy” toward Japan, separating current governmental relations from historical disputes deriving from Japan’s colonial rule of the Korean Peninsula. Within two months after President Park’s talk, foreign ministers from Japan and South Korea met in Tokyo and agreed to resume dialogue to cooperate on certain issues and areas. In terms of advancing relations between Japan and South Korea, the Park administration’s diplomatic strategy so far is off to a good start.

But to heal the wounds of the historical past between the two countries, President Park’s “two-track diplomacy” needs additional support. Externally, South Korea needs Japan’s cooperation to manage, if not resolve, the ticklish historical dispute centering on the “comfort women,” the women who South Korea claimed were forced to work in Japanese wartime military brothels. In fact, an opportunity for overcoming the two countries’ historical animosities is close at hand—it hinges on Prime Minister Shinzo Abe’s upcoming statement, which is scheduled to be delivered on August 15, 2015, to mark the seventieth anniversary of the end of World War II. For South Korea, it is a chance for Japan to demonstrate its sincerity to face history with humility. Internally, were there to be a governmental consensus between Japan and South Korea to negotiate a resolution for the historical disputes, the Park administration would have to proactively communicate with the strong South Korean civic groups that participate in the comfort women movement to compromise during and after the negotiation process.

Since assuming office in 2013, President Park has been particularly critical of the Abe administration, accusing him of evading Japan’s responsibility on the issue of comfort women. Yet, her position has shifted this year, as she clearly expressed in May that South Korea will “press forward with a clear-cut focus and direction in a different dimension” in ties with Japan, disconnecting governmental relations from historical issues.

Indeed, President Park has every reason to refresh the Japan–South Korea relationship. First, the latest Gallup weekly poll shows that President Park’s approval rating fell sharply to 29 percent, the lowest since she assumed office in February 2013. The mismanagement of the outbreak of Middle East Respiratory Syndrome (MERS) virus was one reason for President Park’s low support rate, but a poll by the Hankyoreh Institute for Social offers another explanation. The poll finds that 56.1 percent of South Koreans evaluate the current administration’s diplomatic performances as poor, compared to 35.5 percent rating it as good. Indeed, to many, stronger ties between Tokyo and Washington—as underlined by Abe’s recent visit to the United States and a chance for Abe to address a Joint Session of U.S. Congress during the trip—symbolizes a diplomatic failure of the Park administration.

Second, President Park is facing growing domestic calls to improve economic ties with Japan. According to a survey entitled “2015 Survey of Business Environment for Korean Companies in Japan” conducted by the Tokyo Center of Korea International Trade Association early this year, 53.5 percent of the surveyed Korean companies in Japan reported that the hurdles of Korean companies in Japan are increasing, which is 3.5 percent higher than the previous year’s survey. Following “the continued low yen trend” as the biggest factor for the worsening business environment, “the strained political relations between Korea and Japan” seems to be the second most negative factor that influences Korean companies’ operations in Japan, particularly in non-manufacturing areas such as tourism, transportation and service.

Third, there is an increasing strategic reason for South Korea to engage Japan in order to react to China’s growing power and unclear ambitions, typified by China’s recent expansion of its claims in the South China Sea. In an interview with the Washington Post this June, President Park expressed her view that security and freedom of navigation in the South China Sea are “very important” to South Korea, and South Korea will “watch with concern” developments in that area. Also, the United States is pressing President Park to play an active role in the disputes in the South China Sea. On June 3, U.S. Assistant Secretary of State for East Asian and Pacific Affairs Daniel Russel called for South Korea to “speak out” in support of “universal principles and the rule of law” in the region.

Fourth, the Park administration feels a need to respond to exterior pressure from its American ally to advance its relations with Japan. On May 18, 2015, after meeting with President Park and South Korean Foreign Minister Yun Byung-se, U.S. Secretary of State John Kerry called on Japan and South Korea to promote “healing and reconciliation” over historical issues and to strengthen their relations through direct dialogue.

The Diplomacy in Place

At this stage, President Park’s “two-track diplomacy” appears to be on schedule. The strategy first brought South Korea’s Foreign Minister Yun Byung-se to Tokyo to meet with his Japanese counterpart Fumio Kishida on June 21, 2015. Although the two foreign ministers have held talks outside of Japan this year, with the last bilateral talk in Seoul in March, this was the first time that a top diplomat under the Park administration visited Japan. The meeting was fruitful, featuring a mutual consensus on how to gradually advance bilateral relations, and included an agreement on cooperation in solving standing disputes between the two nations.

First, during the foreign ministers’ meeting, two potential summits were discussed and could be expected to take place “at the earliest time possible.” Foreign Minister Yun and his Japanese counterpart Kishida agreed to step up efforts to set up a summit between President Park and Prime Minister Abe. Despite the passage of more than two years since their inaugurations, the two leaders have yet to hold a summit, with President Park citing the comfort women issue in her refusal to see Prime Minister Abe. A trilateral leaders’ summit involving Japan, South Korea, and China, which were suspended in May 2012, were also been considered by the two foreign ministers.

Second, the two ministers expressed their intention to cooperate in the two countries’ bid to have two of their respective sites—Japan’s “Sites of the Meiji Industrial Revolution” and South Korea’s “Baekje Historic Areas”—added to the United Nations Educational, Scientific, and Cultural Organization (UNESCO) World Heritage list. Previously, South Korea had opposed the candidacy of the “Meiji Industrial Revolution” because it claimed that 57, 900 laborers from the Korean Peninsula were forced to work at seven of the twenty-three sites during Japan’s annexation of the Korean Peninsula from 1910 to 1945. Responding to South Korea’s objections, Japan had asserted that the sites were promoted for the period between the 1850s and 1910, which did not include the 1940s when the forced labor took place. The two ministers’ meeting set the stage for officials from the two countries to begin dialogues to resolve a spat over whether to acknowledge the history of wartime forced labor in the sites of the Meiji Industrial Revolution. On July 5, 2015, despite Seoul’s continuous objection to Japan’s bid, the UNESCO World Heritage Committee decided to approve “Sites of Japan’s Meiji Industrial Revolution” for addition to the World Cultural Heritage list, along with South Korea’s “Baekje Historic Areas.” To smooth the Japan-South Korea relations, the Japanese delegation announced that Japan “is prepared to take measures” to allow an understanding that there were a large number of Koreans and others who were “brought against their will” and “forced to work under harsh conditions” in the 1940s at some of the sites.

In addition to a discussion concerning the two countries’ bid for UNESCO recognition for their respective sites, Minister Yun and Minister Kishida agreed to resume dialogue at the director-general level on the comfort women issue that has long stood in the way of the Japan-South Korea relations. It has always been Seoul’s position that Tokyo should show its sincerity to the “comfort women” in South Korea by extending further apologies and, less officially, that Japan should offer appropriate compensation money to the comfort women. In contrast, Japan has remained its position that the disputes were settled when both countries normalized their diplomatic ties in 1965, and has stated that the problems “concerning property, rights and interests” of the two countries was settled “completely and finally.” Commencing dialogues on the historical disputes between South Korea and Japan may not guarantee a final resolution on their conflicting claims, but is a breakthrough for the two countries, a substantial improvement for the Japan-South Korea relations in the past few years.

On June 22, 2015, President Park and Prime Minister Abe attended receptions held in Seoul and Tokyo respectively to mark the 50th anniversary of the normalized diplomatic ties between the two countries, in another sign of improved relations.