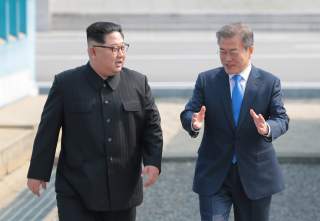 At first, President Donald Trump’s out-of-the-blue tweet last week announcing the cancellation of Secretary of State Mike Pompeo’s trip to Pyongyang wasn’t much of a surprise. Many in the State Department may have been caught unaware by the boss’s sudden change of heart, but the delay was consistent with how Trump has treated the negotiations with the North this year. Pompeo’s staying in Washington was the latest episode in a diplomatic saga between the United States and North Korea that has continued for the last six months. It was a classic Trump move, similar to his abrupt postponement of the Singapore summit with North Korean leader Kim Jong-un months earlier (Trump, of course, would go on to hold the meeting, to the excitement of millions who were watching on television).

It’s another story entirely for South Korean president Moon Jae-in, a man who has spent most of his political life trying to bring the two Koreas closer together. With every cancellation, delay, or mini war-of-words between Washington and Pyongyang, Moon’s job in greasing the wheels in pursuit of inter-Korean reconciliation becomes more difficult.

While the Trump and Moon administrations have stressed unity-of-effort on the North Korea file in public, their positions are not in perfect alignment. The Trump White House, like the Bush, Clinton, and Obama White Houses of yesteryear, is concerned with one thing and one thing only: the Kim regime’s total, complete, unreserved and verified denuclearization. Everything else, whether it’s the signing of a peace treaty, the normalization of economic and diplomatic relations, the opening of embassies and consulates, or general de-escalation, are means to that very specific end. In this view, if Kim Jong-un is unwilling to part with his nuclear warheads, ballistic missiles, and weapons of mass destruction capability, then continuing dialogue is simply a waste of valuable time.

Denuclearization for Moon Jae-in, however, is not the be all and end all; persuading Pyongyang to become a non-nuclear country is just one item on a checklist whose ultimate objective is an historic transformation in how North and South Korea see each other and interact with one another.

President Moon and his government have grand plans for the Korean Peninsula that go above and beyond denuclearization. In a speech to the Korean people last week, Moon outlined his goals for a normal, economically vibrant and mutually beneficial North-South relationship. Seoul wants to reconnect to its fellow Koreans north of the DMZ by linking railroads and highways across the border to accelerate trading relationships and make the Korean Peninsula as a whole more prosperous. Moon discussed the reopening of the Kaisong Industrial Complex, the resurrection of cross-border tours of Mount Kumgang, and the establishment of what he called “East Asian energy and economic communities,” constellation of special economic zones along the North-South border and a Korean version of China’s Road and Belt Initiative—a reliable transportation network that would encompass an area as south as South Korea’s southern coast to as far north as Russia’s eastern ports.

It is abundantly clear that Moon wants to move as quickly as possible on his peace initiative, not only limit the amount of domestic political opposition he would face it outpacing the Americans but also to solidly his own personal legacy as a leader and statesman. He has gambled his entire presidency on Korean peace and reconciliation, a task that could very well turn out to be as hopelessly optimistic as the complete, verifiable and irreversible dismantlement of North Korea’s nuclear weapons capability. Indeed, if Moon hopes to implement any of his plans, then he will need the cooperation of the United States, a nation that has the power to veto any attempt through the UN Security Council to loosen the multilateral sanctions regime squeezing Pyongyang. Without Washington’s assistance in this regard, Seoul would be walking dangerously close to the line of a Security Council violation.

If U.S.-North Korea denuclearization talks stall indefinitely or collapse entirely, then Moon Jae-in will he confronted with the biggest conundrum he has ever had to deal with in his political career. Does he give up on his life’s work of reunifying the two Koreas in a mutual, peaceful embrace in order to stay on President Trump’s good side? Or does he press ahead on diplomatic normalization and a formal end-of-war declaration despite opposition from the the United States, a country that considers even the smallest rapprochement as an unacceptable without North Korean nuclear concessions in return? The first would be the conservative play for the South Koreans, who after all still see the U.S.-South Korean defense alliance as a critical security blanket. The latter, however, would be the fulfillment of Moon’s lifelong ambition. Do the benefits of Korean reconciliation outweigh the costs of a more rocky relationship with Washington and the threat of punitive UN sanctions on Seoul’s economy?

Neither choice is easy. Regrettably, if the stalemate in U.S.-North Korea diplomacy is any guide of what’s to come, Moon may have to make the decision much sooner than he would have liked.