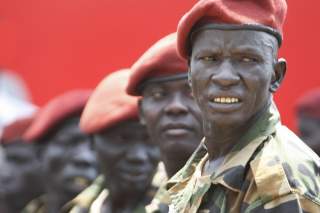 It was 2011 and the world was preparing to welcome its newest nation. After a civil war that seemed interminable even by African standards, South Sudan declared its independence backed by the vote of 99 percent of its population. President Obama had made the referendum a priority, and the recognition of South Sudan by the United States was hailed as a major foreign-policy victory for his administration. “Today is a reminder that after the darkness of war, the light of a new dawn is possible,” he said.

Four years later, South Sudan has been ravaged by another civil war that’s displaced 2.25 million people and left half its population at risk of going hungry. Almost 200,000 South Sudanese are huddled in UN refugee camps, which are becoming squalid. Cholera has broken out and deadly cases of malaria are rampant. Tens of thousands of people have been killed in frenzied fighting that’s stretched on for nearly two years now. “There is no more country,” one South Sudanese recently told the New York Times.

The trouble began in the summer of 2013, when the country’s president, Salva Kiir, dismissed his entire cabinet, including his longtime rival Riek Machar. Machar later admitted he’d been sacked because he told Kiir he intended to stand against him in the next election. Relations between the two were reported to be chilly, always a portentous set of tea leaves in a country with a history of ethnic violence. Kiir is a Dinka, South Sudan’s largest indigenous group, while Machar is a Nuer, its second most numerous.

To Machar, Kiir’s clean sweep of his cabinet was intended to squelch dissent over his handling of the economy. “I’m concerned that Salva Kiir is moving towards totalitarianism and the repression of free speech,” he said. For his part, Kiir claimed he was trying to streamline bureaucracy and offered up the old democratic catchall that any of his dismissed ministers could “go and establish his or her own political party.” Machar didn’t take up that challenge; instead he announced that he was challenging Kiir for the leadership of the ruling Sudan People’s Liberation Movement (SPLM).

As is too often the case with African disputes, this one couldn’t be contained by the ballot box. No one outside South Sudan knows exactly what happened on December 15, 2013. Kiir claims uniformed men loyal to Machar infiltrated an SPLM meeting and opened fire, requiring his government to suppress what appeared to be a coup and rifle through the capital of Juba searching for conspirators. Machar claimed there was no coup, that he’d been framed, that Kiir was “inciting tribal and ethnic violence.” He was later forced to flee Juba and his house was ransacked by government troops.

What is clear is that Dinka in the presidential guard used the alleged mutiny as a pretext to begin rounding up and slaughtering Nuer. An estimated 5,000 people died in Juba that following week alone. And just as in Rwanda, where an entire nation seemed to abruptly go mad, so, too, did the ethnic violence impossibly metastasize across South Sudan. Dinka pressed the attack on Nuer, Nuer began retaliating against Dinka, and the shroud of idealism that had covered the world’s youngest nation was pulled away.

Two years and countless deaths later, many questions linger over South Sudan. One of them is what the intentions of the rebels are. Interviewed last year by Vice, Machar projected the shaken optimism of a man forced into exile for uprooting orthodoxies. “He’s not a rebel,” his wife, Angelina Teny, told Vice. “We did not rebel against anything. We were pushed out of our home because of fear for our lives.”

But Machar was also one of the catalysts behind the violence that plagued South Sudan during the 1990s and 2000s. In 1991, he split his largely Nuer faction away from the SPLA, which was fighting the north under the command of John Garang, a Dinka. The strife of the civil war against Khartoum was suddenly compounded as both ethnicities splintered and began clashing. This was expressed most brutally in the 1991 Bor Massacre, in which 2,000 Dinka were killed in the town of Bor by the White Army, a fearsome Nuer group so named because they smear ashes on their bodies. Some have disputed Machar’s involvement in the slaughter, but in 2011, Machar himself tearfully took responsibility and apologized.

Now, once again, Machar is in the bush prosecuting an internecine war. And while he claims victimization, his forces have been fighting fiercely in the Nuer-heavy Upper Nile State, the only region in the country still producing oil. South Sudan is essentially a petro-state, with crude accounting for 90 percent of its income. Whoever controls the refineries can fund their armies and keep the war effort rolling, a fact of which the rebels are acutely aware. In May, they captured a refinery and promptly tossed out the resident oil companies. The result has been fuel shortages and inflation that are felt as far away as Juba.

But the real toll from this civil war is, of course, the human one. All the hallmarks of African conflict are there: the fighting in the bush; the civilians killed at random; the senseless slaughter fueled by alcohol; the worshippers gunned down in church. Young boys have been castrated and young girls have been raped. The UN has deployed an earnest mission, but its blue helmets have struggled to contain the violence. Machete-wielding fighters have granted genial interviews to camera crews, only to later commit unfathomable acts of butchery.

In Girl, 20, Kingsley Amis’ best novel, Douglas Yandell walks into self-absorbed bleeding heart Roy Vandervane’s house and notices an empty Perspex bottle labeled “Anti-apartheid Fund.” It’s a curious thing, the West’s sense of compassion. We’ve become captivated by the civil war in Syria to the point that it’s a banner issue in our presidential debates, yet the constant suffering of the continent to the southwest largely escapes our attention. The White House hasn’t drawn any red lines for Salva Kiir; Marco Rubio isn’t hectoring for action in South Sudan. Neoconservatives haven’t even devised a way to blame the whole civil war on President Obama.

Obama, to his credit, hasn’t led from behind on this one. Having helped midwife South Sudan, he recently pressured both sides into hammering out a peace deal. But those negotiations have been abortive from the start. At least seven previous agreements have been signed and then quickly abandoned, and this one appears destined for the trash bin as well. The rebels have already accused the government of breaking the peace, and Kiir is reluctant to remove his troops from Juba, even though demilitarization is one of the deal’s key tenets.

Beyond that, the United States is providing significant aid money to South Sudan. Our Perspex bottle is out, but our attention is elsewhere.