For Southeast Asia, Globalization Is a Return to the Historic Norm 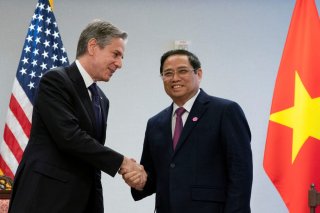 Over the last months, the Biden administration has sought to demonstrate America’s renewed commitment to Southeast Asia, with an eye to countering China’s expanding presence within the region. On May 23, the Biden administration unveiled the Indo-Pacific Economic Framework (IPEF), an initiative which includes the Southeast Asian countries of Indonesia, Malaysia, the Philippines, Thailand, Vietnam, Brunei Darussalam, and Singapore. Earlier in the month, Biden also hosted most of the leaders of the Association of Southeast Asian Nations (ASEAN) in Washington for a special summit. ASEAN is a regional bloc comprising the above-mentioned countries as well as Myanmar, Laos, and Cambodia.

Given the region’s geo-economic importance, it is little wonder that both China and the United States have sought to establish a presence there. At present, Southeast Asia represents one of the most economically dynamic regions on Earth. According to the most recent estimates by the International Monetary Fund, the so-called ASEAN-5, comprising Indonesia, Malaysia, Thailand, the Philippines, and Vietnam, is expected to grow by 5.32 percent in 2022 (in contrast, the average growth rate for emerging market and developing economies is projected to be 3.82 percent). High commodity prices and a rebounding tourism sector will also see most of Southeast Asia’s major economies escape the stagflationary trend expected to hit other parts of the world.

Yet while the Biden administration has sought to demonstrate its internationalist credentials in contrast to that of Donald Trump, the inward-looking essence of Trump’s “America First” agenda has been largely maintained. A domestic backlash to the merits of free trade and economic openness has seen America shy away from its traditional role as a global trade leader. This turn away from globalization will prove a major obstacle to building more meaningful ties with the member states of ASEAN, to whom globalization has always remained crucial for furthering development and raising the standards of living of its people.

Throughout history, the fortunes of Southeast Asia have been intimately tied to global connections. Being strategically located on the maritime routes connecting China, India, and the Middle East heralded a global infusion of cultural influences, creating some of the most diverse societies on the planet. Exchanges with the subcontinent brought new religious and cultural ideas, while links with China brought demographic changes in the form of a large Chinese diaspora.

Historians refer to an “Age of Commerce” between 1400 and 1650 where trade networks facilitated state-building and urbanization throughout the region. As such, for many Southeast Asians, the postwar turn towards globalization was not a new and unsettling phenomenon but rather a return to the historic norm, transcending the borders drawn by the former colonizers.

Given Southeast Asia’s dependence on the global economy for its prosperity, it is unsurprising that China has been the most successful in building regional influence. Trade links between China and Southeast Asia have grown exponentially since the former’s opening in the eighties, with China’s percentage share of Southeast Asia’s total trade rising from 2.5 percent in 1996 to 17.2 percent in 2017.

Southeast Asia’s export-reliant economies have positioned themselves as key supply nodes within the global value chains centering on China, largely exporting intermediate goods and commodities to the mainland to be processed into finished products. China is also the largest economy within the ASEAN-led Regional Comprehensive Economic Partnership (RCEP), a mega-free trade deal accounting for 29 percent of global GDP and 30 percent of the world’s population.

China has also provided a ready source of investments, particularly under the umbrella of its Belt and Road Initiative (BRI). An ambitious global program launched in 2013 to link China with new markets through a vast network of infrastructure projects, the BRI has been welcomed by a region suffering from an acute infrastructure gap. According to data collected by the American Enterprise Institute, BRI-related investments and construction projects in Southeast Asia between 2013 and 2021 totaled $197.8 billion, or 23.6 percent of the global total.

In contrast, the populist turn of the United States has seen it struggle to compete with China for regional influence. The Trump administration’s withdrawal from the Trans-Pacific Partnership (TPP) dealt a huge blow to American regional interests. The Biden administration sought to salvage the situation through the unveiling of IPEF, an economic framework to deepen engagement between member countries in the areas of trade, supply chains, the green transition, and anti-corruption measures. IPEF has been met with a lukewarm response from potential Asian partners, given that it lacks greater market access to the United States and major infrastructure investments, both crucial carrots for Southeast Asia.

The United States has also sought to bolster its regional profile through the so-called “Quad,” a grouping of “like-minded” democracies including Japan, India, and Australia. Meant to demonstrate an alternative set of partners to China, the Quad has nevertheless struggled to match Chinese economic statecraft within the region. As noted by Susannah Patton of the Lowy Institute in a recent piece for the New York Times, “The Quad, in fact, highlights an American weakness: The United States is strong in the democracies fringing the region but weak at the center in Southeast Asia.”

Any meaningful reengagement with the region would mean Biden having to confront the isolationist impulses now prevalent among both the political Left and Right at home. Indeed, these impulses are not new but have historical precedent. Postwar American attitudes towards Asia have always been colored at some level by economic anxiety. Following postwar Japan’s economic takeoff, Americans fretted about their car market being swamped with superior Japanese-made cars, with Reagan imposing protectionist barriers against Japan’s automobile industry in response.

Following India’s economic opening in the late nineties, American politicians warned of “Bangalorization” as companies began outsourcing IT operations to India. More recently, American commercial interests in China earned the ire of Trump and the MAGA movement, who believed it had been detrimental to U.S. jobs and manufacturing. For observers, there is little reason to believe greater economic linkages between Southeast Asia and the United States would not encounter similar hostility.

If not the United States, then who? India, Asia’s other major power and regional rival for influence vis-à-vis China, has likewise made little headway in ASEAN. The Modi government has struggled to overcome economic populism in favor of serious reforms, with much of India’s economy still caught in the legacy of Jawaharlal Nehru’s socialist-era License Raj system (this was most glaringly seen in the government’s failure to liberalize its agricultural sector after mass protests by farmers erupted in 2020 and 2021).

In November 2019, India pulled out of the RCEP agreement, citing threats to India’s manufacturing sector. In a piece for Foreign Policy written in November 2020, columnist Surupa Gupta and political scientist Sumit Ganguly argued that New Delhi’s decision had ultimately been influenced by the Indian political class’ traditional aversion to free market economics in favor of protectionism and self-reliance, and warned that it had cost India the potential to play a bigger role in setting norms in new issue areas within the Asia-Pacific’s evolving regional trade architecture.

While American and Indian foreign policy remain wedded to populist pressures, its fellow Quad partner Japan provides a blueprint on how to more successfully engage with Southeast Asia and build regional goodwill. Following the departure of the United States from the TPP, Japan proved indispensable in resuscitating the agreement into the CPTPP. Japan has also been a signatory to RCEP despite differences with China.

Meanwhile, while Chinese overseas investment projects (most notably the BRI) often receive the most spotlight, by some measures Japan has actually outpaced China in financing and building infrastructure projects within certain Southeast Asian countries. Analysis by data provider Fitch Solutions in 2021 found that Japan had a combined total of $259 billion invested in unfinished projects in Indonesia, Malaysia, the Philippines, Thailand, and Vietnam, in comparison to China’s $157 billion.

It therefore shouldn’t be surprising that Japan has been the most well-received Quad member within Southeast Asia. In a January 2022 region-wide survey conducted by the Singapore-based ISEAS-Yusof Ishak Institute, Japan was ranked the most trusted major power in Southeast Asia, with 54.2 percent of respondents expressing confidence in Japan “doing the right thing” in global affairs (the United States came second while India was ranked as the second least trustworthy just after China).

Japan serves as a template for how the United States can more proactively engage with Southeast Asia. The Biden administration should seek to increase infrastructure investment into the region, as well as rejoin the TPP to give Southeast Asian countries greater access to America’s huge market.

As columnist Noah Smith argues, such a course of action would have historical precedent, with the United States having opened its markets to its key Asian allies during the height of the Cold War, including Japan, South Korea, and Taiwan, thereby facilitating East Asia’s rapid development.