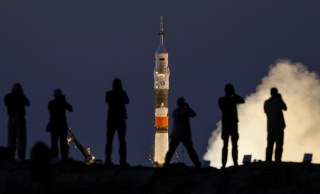 For some time now, experts have discussed how space is no longer only for exploration or passive surveillance but also serves as a potential warfare domain. However, space policymakers and decisionmakers continue to debate about America’s inability to keep up with the operational environment. Instead they should focus their attention on what the United States is “doing” to round the corner.

The United States cannot and should not invest $5 billion dollars on projects in some green room for technical geeks to come up with potential solutions. At appropriate clearance levels, it is now time for concrete answers and stakeholders should not be expected to wait. The solution is not that the United States is creating a separate military service branch—the U.S. Space Corps. The U.S. Space Corps under the current construct—if that happens—will merely be a reorganization of the U.S. Air Force and not a resolution to our joint military shortcomings with regard to space.

The primary focus still has not been on efforts to overcome the space capabilities of America’s adversaries. The United States needs to accept that it will never completely dominate space. The United States will never win in this warfare domain based on counterspace measures and rational/logical maneuvers. The United States needs an asymmetrical advantage in the same way U.S. Special Forces operate and posture. There should be a high cost to adversaries harassing the U.S. government or commercial affiliates and allies in space. This requires unconventional thinking not usually espoused by the current pool of space subject-matter experts—both in and out of government.

Space is a domain that enables and constrains the abilities of our adversaries to operate in terrestrial conflicts on earth and not some distant planet or galaxy. Today and tomorrow, we are not talking about Star Trek’s Starfleet or a Star Wars Imperial Navy—although hopefully that will materialize one day over the next century or centuries. If and when that day comes, the U.S. Navy would have a comparative advantage among the other military services branches in conducting forwarded operations, supply/logistics, assured command and control, navigation, and reliance on space.

In the meantime, the U.S. military services and national leaders need to evolve the U.S. Air Force’s mentality about space—ironically the executive agent for space—because the service almost solely focuses on space assets and operations to the detriment of a “joint” force, which is focused on a holistic array of terrestrial conflicts. This is exemplified in the U.S. Air Force’s space working groups, decisions, documents in response to congressional inquiries—it is notable how few times the word “joint” is cited—especially when the process and products are supposed to be joint military approaches. Given this construct, the Space Corps will not be the solution, especially if they are not tied into the terrestrial priorities and consider the entire joint force.

Space has become truly indispensable to decisionmakers and warfighters. Space is the connective tissue holding other domains (land, air, sea and cyber) together. Thus, just as they have in other domains such as sea—in space, our adversaries are increasingly trying to build capabilities to degrade and deny our capabilities, freedom of movement, and to spy on our operations.

Policymakers and warfighters need timely and decisive decision advantage, so what the United States needs immediately are fast solutions that will serve as deterrents against adversaries when they calculate success and risk. What is needed is the ability to create the crucial fog or ambiguity—whether it is a three-hour capability advantage or something logistical—not because the United States is going to go to war in space, but because wars are now hybrid and space as a domain supports terrestrial conflicts. We do not have the time for the completion of highly Special access programs projects based on $5 billion dollars in investments.

Strategic documents and decisions emanating from the highest strategic echelon of the U.S. government need to account and address the aforementioned concerns. For starters, with regard to space-policy issues, the Principal Department of Defense Space Advisor, a position that falls under the U.S. Air Force Secretary, needs to be aligned under the Office of the Secretary of Defense and to assume more jointness among its ranks especially in leadership roles. In addition, if the Space Corps is expected to work, then it needs to be an integrated joint venture among all the military services. It should not be monopolized by the Air Force. In order to implement national space policy, there might be a requirement for a new joint command or the reassignment of an existing joint command to focus on manning, technical expertise training, jointness and the equipping necessary to meet each of the services’ needs and requirements—especially in the joint environment where interoperability is key.

Mir Sadat, PhD, is a naval officer currently assigned to the Chief of Naval Operations’ Space Team. His opinions are his own, do not reflect the official policy or position of the U.S. government or any of its Departments/Agencies.

Image: Photographers take pictures as the Soyuz MS-05 spacecraft carrying the crew of Paolo Nespoli of Italy, Sergey Ryazanskiy of Russia and Randy Bresnik of the U.S. blasts off to the International Space Station (ISS) from the launchpad at the Baikonur Cosmodrome, Kazakhstan July 28, 2017. REUTERS/Shamil Zhumatov