Spain's Political Siesta Is Over 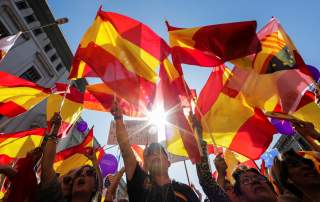 Don’t look now, but Spain may be waking up from the fifteen-year political siesta that made it an outlier in Europe. During that time, Spain was the only state without a major conservative party. Today, suddenly, it has two.

This could be good news for a Trump administration with few fans in Western Europe, yet trying to rally international support for democracy in Venezuela. In the early 2000s, there was no stronger friend-in-need to Washington than Madrid. Few remember it now, but before Trump Derangement Syndrome, there was Bush Derangement Syndrome. It reached epidemic proportions in the halls of government of Paris, Berlin and Brussels, but not in La Moncloa, the official residence of the Spanish prime minister. Its occupant from 1996 to 2004 was Jose Maria Aznar, a close friend of George W. Bush. The two together constantly thwarted French and German pretentions to run Europe behind an EU veil.

The man who led Spain’s conservatives away from Aznarismo and into political stupor was Mariano Rajoy. Hand-picked by Aznar to run his Partido Popular, also known as the PP, in the 2004 elections, Rajoy led them into defeat after a bloody terrorist attack left 193 people dead in Madrid. He became prime minister in 2011 and remained in office until his ouster last year.

Rajoy took a Partido Popular that under Aznar was dynamic, free market, and staunchly pro-United States, and turned into a technocratic machine that became the political wing of the administrative state. Boring was good, and moderation in the defense of liberty a virtue. Ideology became a dirty word. The PP was no longer conservative in any recognizable way.

Marianismo has now been buried, however. The perpetrators are the PP’s thirty-eight-year-old new leader Pablo Casado Blanco and a new insurgent party called Vox, a name that underlines its Vox populi populism.

Casado, Aznar’s former personal assistant, took over the PP after Rajoy and has already shown a more pro-American bent. Last week, at a rally in central Madrid, Casado publicly thanked the United States for breaking ties with Venezuela’s dictator Nicolas Maduro, something the Socialist government hasn’t done yet.

Casado is in a fight to stop Vox from taking away his party’s voters. His recent speech at his first party congress was a good first step in that it drew a line in the sand between the present and the immediate past.

Casado stumped for lower taxes, against abortion, and for an end to the suffocating promotion of identity politics in schools (“don’t indoctrinate our children,” he said). He promised to be tough against separatists in Catalonia and to support the Crown. The national anthem played at the end, to a standing ovation.

“Fantastico,” said an enthusiastic Aznar, who returned triumphantly to the PP party congress for the first time in years. Rajoy was given the chance to make a minor speech, which the news site “Economia Digital” called “intentionally anodine.” True to form, he cautioned that “sectarianism is not good nor are doctrinaires good.”

It was precisely this timidity that got Vox launched in 2013. Vox has returned pride in national identity to the center of Spanish politics. For the first time in decades, it is now commonplace to see Spanish flags flying from Spain’s iconic balconies.

The new party thus represents a second, needed correction in the evolution of Spanish conservatism. Aznar accomplished the first.

As I wrote for the Wall Street Journal from Madrid toward the end of Aznar’s seven-year rule, “He inherited the wounded remnants of Gen. Franco's conservatism—insular, atavistic and Hispanically mystical in its Catholicism—and made it classically liberal.” Vox is now unapologetically adding God, family, King and country to the free-market mix.

That makes it powerful, and it is why Vox is drawing so much invective from the liberal establishment in Spain, Europe and the United States. True, it has been aided by the Catalan separatists and the refugee crisis affecting all of Europe. But it has managed these advantages well with media-savviness and a cheerful message.

When Vox came out of nowhere to get four hundred thousand votes late last year in deep-red Andalusia’s regional elections, the political establishment finally started clutching at its pearls. Vox’s vote count was 40 percent of the vote of the top party, the Socialists, and more than half of the PP’s tally. Both parties lost hundreds of thousands of votes.

With Vox’s outside support, the PP was able to form its first government in Andalusia, a southern region run by Socialists practically since Franco died. Its coalition partner is Ciudadanos, a center-right, youthful party also bleeding the PP of support.

The PP seems to be the only one of Spain’s establishment parties to realize that calling Vox’s voters a bunch of deplorables is not a good idea. Casado thinks he can reproduce the Andalusia formula throughout the peninsula, and eventually the central government in Madrid. The only question is whether Casado gets—as Vox does—that the winning conservative formula is free markets and national identity.

Lots of lessons here for American conservatives currently having this debate—in the administration and outside of it.

Mike Gonzalez, senior fellow at the Douglas and Sarah Allison Center for Foreign Policy, spent close to twenty years as a journalist, fifteen of them reporting from Europe, Asia and Latin America.