A Special Prosecutor: The New York Times Next Bad Idea 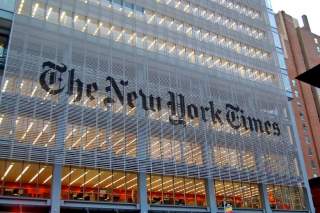 In calling for the appointment of a special prosecutor to investigate Donald Trump’s relationship with Russia, the New York Times asks a fair question but gives a dangerously short-sighted answer.

The question is “who will be in charge of that investigation?” The right answer, until strong evidence of criminality is produced, is that the press itself should be conducting the investigation. A special prosecutor would be premature and entirely counterproductive, to an extent that should give even president’s staunchest critics pause.

The Times’ own report this week on the Trump campaign’s contacts with Russian intelligence indicate no grounds for a special prosecutor. Three of the four aides in question—Paul Manafort, Roger Stone and Carter Page—were long gone from the campaign before election day and have not subsequently had any role in government. The exception is Michael Flynn, who has been dismissed as national security adviser.

As the Times reported, U.S. intelligence looked at communications last year between these four and Russian officials, investigating whether “whether the Trump campaign was colluding with the Russians on the hacking [of the Democratic National Committee] or other efforts to influence the election.” And as the Times also reported: “The officials interviewed in recent weeks said that, so far, they have seen no evidence of such cooperation.”

The public might reasonably request something more than “no evidence” before a special prosecutor is appointed.

The Times report nevertheless generated a sensation among liberal journalists on Twitter, who saw it as a smoking gun. Less ideologically invested observers, however, had another reaction. Matt Welch, editor at large of the libertarian magazine Reason, called the report and its politically polarized reception, “Underwhelming, anonymous, inconclusive, ultimately premature.”

To call for appointing a special prosecutor at this moment, when neutral observers are skeptical and the voters who elected Trump are fully behind him, cannot accomplish anything good. Demanding such a thing in the absence of compelling evidence of wrongdoing—compelling enough to persuade many ordinary Republicans—only reinforces the impression of much of Middle America that Trump’s critics are ideologically motivated. And inevitably, when special prosecutors are appointed, they give rise to extraordinary partisan hostilities that has long-term consequences. Consider the history and its unintended consequences.

The effect of the Whitewater investigation and other inquiries into President Bill Clinton’s business and personal affairs was to make the president, his wife, and their associates extremely secretive, ultimately leading Mrs. Clinton to put her e-mail as secretary of state on a private server. The effect of the Watergate and Iran-Contra investigations of the Nixon and Reagan eras was to make the Republicans whose formative political experiences occurred in those years—figures like Dick Cheney, to be sure, but also ordinary Republicans who watched the humbling of two GOP presidents on TV—vengeful and protective of executive power. (Barton Gellman’s book Angler provides insight into how this informed Cheney’s behavior as vice president under George W. Bush.)

As much vitriol and blowback as special prosecutors give rise to, they are in order when there is clear evidence of wrongdoing, as there was in Watergate. But the partisan ramifications of appointing a special prosecutor cannot be overlooked, however high-minded the advocates calling for one might consider themselves to be. If Attorney General Jeff Sessions could be pressured by the Times and other outlets into appointing a special prosecutor, the Republican grassroots, who are not susceptible to prestige media pressure—quite the contrary—would nonetheless take it as a move by a “deep state” establishment, in the press as well as in government, to reverse the outcome of last November’s election. It would radicalize Trump’s supporters for years to come.

The editors of the Times have attempted to embarrass Sessions into seeing things their way by pulling a “gotcha”: they found a Fox News opinion piece that he signed onto last year calling for Obama’s attorney general, Loretta Lynch, to appoint a special prosecutor to investigate Hillary Clinton. But those editors should think twice: the Fox piece shows just how ready Republicans were last year to unleash a special prosecutor for what the Times would presumably consider blatantly political purposes. A premature special prosecutor appointment to investigate President Trump would be guaranteed to lead to partisan payback the next time the Democrats hold office. It would set a fresh precedent.

As it is, there have been no special prosecutors since the Bill Clinton years, when Whitewater and other investigations cost taxpayers some $80 million to no good whatsoever. Clinton’s opponents wound up paying the political price—a lesson that President Trump’s opponents should take to heart. The denouement of the endless investigations into Clinton was an impeachment that failed to convict and remove him from office, although he had indeed obstructed justice in a civil suit by lying under oath. Clinton survived, but the country was degraded, and the Republicans lost seats in the 1998 congressional midterms. Newt Gingrich lost his speakership; his would-be replacement, Rep. Bob Livingston, was also felled by a sex scandal; and into the vacuum stepped a speaker who then seemed untainted by scandal—Dennis Hastert. Not only the GOP, but the country, was the worse for all those years of investigations culminating in impeachment.

By giving in to “Clinton hatred,” the Republicans of the late 1990s only undermined themselves. Democrats and President Trump’s other opponents are making the same mistake today. They have personalized their attacks and bought into their own hype that the country is in crisis and the president is so obviously unfit for office that no attempt is needed to persuade those who aren’t already persuaded. But those who are not persuaded include the vast majority of Republicans and Trump voters. And Trump has proved himself a master of winning popularity contests against high-minded opponents who deem him unacceptable from the first.