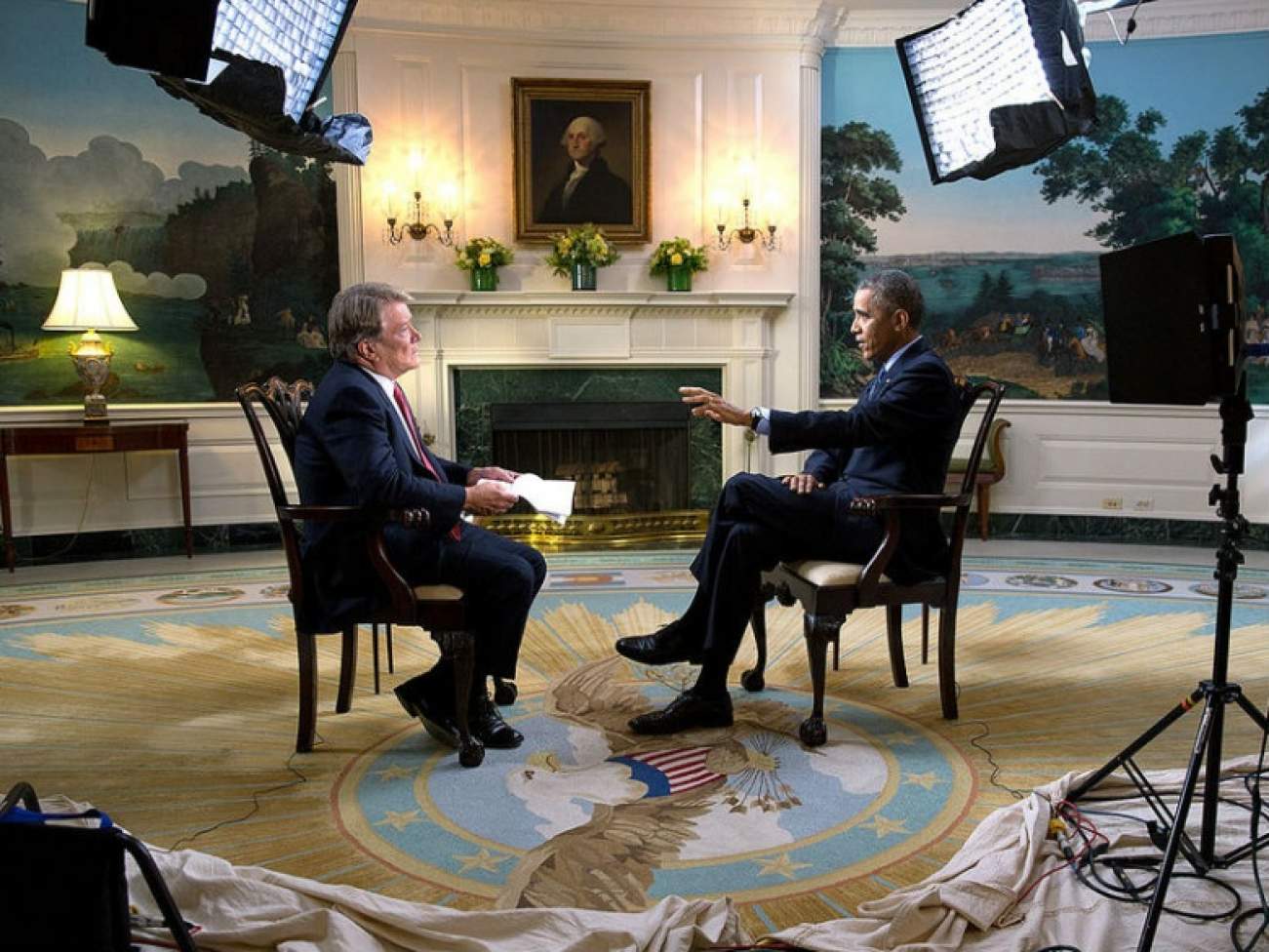 SPIN. This sibilant, hissing little word slithered its way into the national lexicon during the 1988 presidential campaign, David Greenberg tells us in his splendid and important new book on the public relations of American politics. Minions and factotums dashed out the vomitoria of the debate arenas to assert victory to the cameras and microphones on behalf of their respective clients, George H.W. Bush or Michael Dukakis. Thus was born “Spin Alley.”

The next election cycle gave us Bill Clinton and the era of “it depends what your definition of ‘is’ is.” (Clinton was a product of a good Jesuit education at Georgetown, we sometimes forget.) Then we had the testosterone-flavored spin of George W. and “Mission Accomplished,” followed by Barack Obama and the Zen-like “spin of no spin.” (Whatever that means.) Those ur-spinners of 1988 triggered a butterfly effect: a quarter century on, the fluttering of their lips has created a hurricane of spin. No one seems able to decide for sure if there really were thousands of Muslims in New Jersey on 9/11, cheering and jeering as the towers came down. Maybe it doesn’t really matter. Donald Trump insists he saw those bastards cheering. On TV! Even if no one else did. And if you don’t agree with him, he doesn’t give a damn. Let the hurricane blow. Hold onto your hats with one hand, and with the other, turn the pages of Greenberg’s book to find out how on earth we got here.

Greenberg is the author of among other books, Nixon’s Shadow: The History of an Image. He is a historian of American politics and a professor at Rutgers University. There’s scholarly meat in these 640 pages, starting with a discussion of Plato and Aristotle’s competing views on rhetoric, and going on to finely wrought riffs from Hannah Arendt. It is a textbook study, but lively as can be. Greenberg is a terrific storyteller, with a ginger touch and a falcon eye for the brilliant detail, which makes his book an education and an engrossing read. Republic of Spin is surely the definitive book on a definitively American subject: the making and manipulation of public opinion.

Greenberg’s central thesis is America’s ambivalence (nearly schizophrenic, at times) about a talent it disposes arguably better than any other country in history. America’s exceptionalism extends to its mastery of public opinion and advertising and image making. But as we are fundamentally a decent species of folk, this gift of ours makes us very, very uncomfortable. More than once as I was reading Republic of Spin did I think of a moment in perhaps the quintessential American movie, when a little dog pulls back the curtain to reveal an old man furiously manipulating levers and shouting into a voice-altering engine-room speaking tube.

GREENBERG BEGINS his history with Theodore Roosevelt, whom he calls America’s “first full-fledged celebrity,” the archetype of the “man in the arena.” Owen Wister, who wrote an American classic called The Virginian without ever having foot in Virginia, said of his Harvard classmate that he “was his own limelight.” And TR knew how to keep the limelight focused. He never stopped cultivating reporters and had a visceral feel for how to use publicity “as a weapon.” He was the master and creator of the White House as bully pulpit.

Part of TR’s genius for manipulating opinion was in part a product of his extraordinary, even atomic, energy. Greenberg gives us a marvelous scene at the Cosmos Club, as Rudyard Kipling sits, rapt, as TR talks (and talks): “I curled up on the seat opposite,” Kipling described the moment, “and listened and wondered until the universe seemed to be spinning around and Theodore Roosevelt was the spinner.” (How delighted Greenberg must have been to find that.)

TR was also a Machiavel. It was he who first came up with the trick of releasing bad news on a Friday so as to bury it in the Saturday papers; who came up with floating trial balloons to see if a policy would take flight; who recognized the power of the news camera (though Greenberg notes that McKinley was the first president to make a campaign film). Perhaps TR’s greatest PR insight was to keep it short. He never stopped talking, but when he had a message to convey, he put it in as few words as possible so that it wouldn’t be misquoted. (“Speak loudly and carry a big stick”; “Perdicaris alive or Raisuli dead,” etc.)

TR also understood that the press corps would be grateful to have an improved White House pressroom; and to have informal press conferences. But there were certain rules, and woe to those pressmen who flouted them. They became members of the “Ananias Club”—“named for a Christian biblical figure who dropped dead after lying to the apostle Peter.” Not that TR himself was above lying and equivocating. And he was adept at the jujitsu of leaking and then denying the leaks, prefiguring the immortal Captain Renault of Casablanca. (“I’m shocked—shocked—to find that gambling is going on here!”)

During that era, there were numerous Totos who knew how to pull back the curtain and reveal the darker insides of American industry. This was the age of muckrakers like Ida Tarbell and the crusading journalists who took on Standard Oil and the mine owners and the meat industry. Many of them worked for McClure’s magazine under the legendary Samuel “S.S.” McClure. Its contributors list is stunning, a Who’s Who unto itself: Lincoln Steffens, William Allen White, Rudyard Kipling, Frank Norris, Willa Cather, Stephen Crane, Jack London and O. Henry. Those were the days.

To defend themselves against these upstart muckrakers, people like John D. Rockefeller turned to people like Ivy Ledbetter Lee, and another neologism entered the American lexicon: “public relations.” Lee became so adept at this new profession that he became himself a public figure. It was Lee who advised Rockefeller to distribute dimes to poor children. Not everyone was impressed. Carl Sandburg called Lee “a paid liar.”

WOODROW WILSON (whose name is now vanishing from various buildings) was also canny (up to a point) at the great art of bringing the public on board. He was an exponent of “pitiless publicity,” a term he annexed from Ralph Waldo Emerson. Now we tend to call it “transparency.” This stratagem would eventually backfire—fatally—against Wilson. But for a while, he was really good at it. It was Wilson, we remember wistfully in our era of hour-long State of the Union speeches, who came up with the idea of delivering the annual report to Congress in person. He brought in the first one, in April 1913, in nine minutes. (Oh, to have that back!) It was well received. In a moment of gleeful schadenfreude, he chortled afterward to his wife Edith, “I think I put one over on Teddy.”

The early Wilson in these pages has an engaging, even warm personality: genial, witty, armed with a dandy sense of humor. He was even a crackerjack limerick-maker. (There is hardly a mention of the racism that has his name now being swabbed from buildings.) Later on, Wilson went back on his embrace of “pitiless publicity.” He insisted on secret negotiations at the post–World War I peace conference. This enraged his press handlers, Ray Baker and Edward Bernays. Baker would later publicly seethe that Wilson and the Allied leaders “had failed the acid test of the democracy of any people”—how it treats its press corps. In today’s era of self-glorifying media, that statement might give pause, but it expresses a fundamental truth. Putin’s Russia, for example, treats its upstart reporters rather harshly: it kills them.

World War I turned public relations into militant “propaganda” (a term that was first deployed in 1622, by the Vatican). A generation later, this would have dire consequences. The job of managing U.S. propaganda during the Great War fell to a man named George Creel, head of the Committee on Public Information. Creel quickly became unpopular, even despised, as Americans instinctively soured on being told what to think, even about the monstrous Hun.

WHEN IN THE 1930s Hitler came to power and the dreadful realities of Nazism became increasingly apparent, America was reluctant to engage in another propaganda war. The previous one had left the country—and not just its isolationists—with a case of caveat emptor, as well as an understandable reluctance to fight another European war. Meanwhile, Hitler’s Germany grew and grew.

In 1940, The Nation published the text of a speech by poet and librarian of Congress Archibald MacLeish that, in Greenberg’s telling,

“criticized the retreat of scholars from moral and political commitments in favor of bloodless scientific values of ‘objectivity—detachment—dispassion.’ [MacLeish] faulted writers for trying to see the world ‘as a god sees it—without morality, without care, without judgment.’ . . . Nothing did more, MacLeish said, than World War I cynicism to ‘disarm democracy in the face of fascism.’”