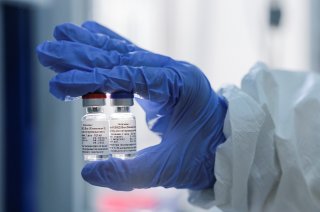 Let me state from the onset: I am not a scientist. I have no way of assessing the potential efficacy of any "Sputnik-V" coronavirus vaccine. What I can comment on, however, is on the geopolitical ramifications of this announcement.

When it became clear that COVID-19 would not be an outbreak geographically limited to certain regions of China but was on track to becoming a global pandemic, the Russian government had two initial responses. The first was to confidently declare that Russia would be effectively and efficiently sealed off from the virus. The second, based on the proposals advanced by Russian president Vladimir Putin at the virtual G-20 summit, was that, in effect, the great powers should cease their competitive efforts and band together to find a common solution.

Neither of these panned out. Not only did coronavirus arrive in Russia, it quickly stress-tested the Russian health system and the ability of its federal and regional governments to respond to this crisis--and found all of them wanting. Because the virus spread throughout the country while the Kremlin also had decided to embark on a demolition-derby oil price war with Saudi Arabia, the economic impacts were dramatically compounded. Russia’s economy is now set to enter negative territory for 2020, with only the most anemic recovery projected for the following years. Moreover, the pandemic interrupted one of the most important legitimizing events for the Russian government—the celebration of Victory Day and the triumph over the Nazis. Instead of appearing to be a decisive figure prepared to guide Russia into the turbulent decade of the 2020s, the coronavirus pandemic led to Putin’s absence from the stage while his prime minister Mikhail Mishustin appeared to be struck down by the disease.

At the same time, the Trump administration made clear that it would view the pandemic through the lens of “America First” and would not hesitate to push for U.S. advantages especially if rivals and competitors were hard-hit by the virus. Meanwhile, while Xi Jinping touted China’s offers of help, it became clear that there were strings attached to any Chinese proffer of aid. For the Kremlin establishment, the overriding fear was that other nations would make the critical breakthroughs on treatments for coronavirus before Russia—and then either allow Russia to be further weakened by the virus before offering help, or use any vaccine as leverage to force concessions from the Kremlin.

Thus, I was not surprised when reports emerged of Russia-connected hacks and cyber intrusions into the data systems of Western firms and institutions pursuing research into vaccines and treatments. As with Soviet espionage directed at the Manhattan project, Russian efforts in this regard seem to have been designed to identify dead-ends so that valuable time and resources could be devoted to more promising efforts.

The announcement of “Sputnik V” (and the choice of nomenclature is deliberate—connecting this supposed achievement with the Soviet Union’s crowning accomplishment of opening humanity’s access to space) serves several political agendas. The first is to reassure Russia’s own population that the state is moving towards a solution—and is doing so without having to rely on outside help. Moreover, it is being used to justify the sacrifices Russians have made in recent years as a result of Western sanctions—that ordinary Russians need to accept cuts in the standard of living so that Russia can retain the capabilities of a great power, and, in this case, in the realm of health security. More practically, the Russian economy—and the patience of the Russian people—will not withstand another sustained period of lockdown.

But it is the geopolitical usages of Sputnik V which interest me the most. Moscow has identified a coalition it wishes to confirm, develop, and pay for the vaccine—and its preferred choice of partners is quite interesting. Kirill Dmitriev, who heads up the state-controlled Russian Direct Investment Fund (RDIF), has noted that phase 3 clinical trials will be held in India, Saudi Arabia, the UAE, Brazil and the Philippines. Also, Dmitriev expects that production of the vaccine will take place with financial partnerships and local manufacturing concerns in India, South Korea, Brazil, Saudi Arabia, Turkey and Cuba.

In essence, Russia is not only turning to its long-standing strategic partner India but reaching out to a series of middle powers, most of whom have had friction in their relationship with the United States in recent years, or who now feel less sure of U.S. guarantees and support. At the same time, these are countries that want options beyond having to turn to China. It follows a Russian strategic approach of reaching out to the non-Western world and positioning Russia as an alternative. Certainly, countries like India or Korea or Saudi Arabia are not going to abandon their ties to the United States nor cease their cooperation with American and European entities seeking a cure for coronavirus, nor is Russia demanding any sort of exclusivity. But these states—including those with close political and security ties to the United States—also see no need to continue to uphold any sort of U.S. preference for isolating or containing Russia.

Russia’s hope for a partnership with the United States is long dead, but Moscow worries as well about being suffocated by China’s embrace. This coronavirus vaccine bid is Russia’s effort to establish leadership of a middle group of nations who want to avoid the binary choice of Washington or Beijing—and is part of Putin’s efforts to retain a global leadership role for himself.