Stability Is Still Possible in Gaza. Here's How. 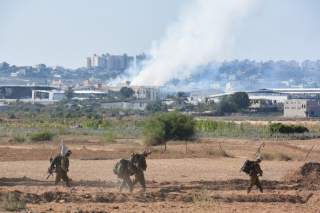 On August 5, after twenty-nine days of fighting, Israel and Hamas accepted the Egyptian proposal for a seventy-two-hour unconditional cease-fire. The cease-fire was meant to provide a calmer environment for direct and indirect talks on stabilizing the relations between Israel and Gaza. At this writing, fire has been renewed—and indeed might even escalate—but the efforts to restore the ceasefire and to then establish the terms of a broader and more enduring understanding also continue. This fluid phase in the process might continue for some time before such an understanding is reached. The following is an attempt to sketch the basic requirements for transforming any cease-fire the parties may agree on to more stable relations between Gaza and Israel, and between Israelis and Palestinians more broadly.

Any attempt to establish a more stable relationship between Israel and Gaza must begin with ascertaining the causes of these relations’ current instability and the circumstances that caused the most recent eruption of violence. In the broadest sense the failure of U.S.-led efforts—most recently, the attempts by Secretary of State John Kerry to broker a permanent status agreement between Israel and the Palestinian Authority—provided the environment in which the eruption of violence could be expected.

Regionally, during the past year Hamas has found itself in unprecedented isolation. This was partly self-induced—resulting from Hamas’ decision in 2011 to support the Syrian rebels and to relocate its headquarters away from Damascus. The decision alienated some of the movement’s most important regional supporters: Iran and Syria. But in part the isolation resulted from developments over which Hamas had no control, most important among them was the counter-revolution in Egypt in early July 2013 which ousted the Muslim Brotherhood, Hamas’s natural allies. The latter development led to very tough Egyptian measures to isolate Gaza by closing the Rafah crossing even more hermetically than before and, even more important, by destroying the network of tunnels that Hamas had built under the Gaza-Egyptian border. The tunnels were designed to circumvent the restrictions imposed by Egypt and Israel in the aftermath of Hamas’ take-over of Gaza in June 2007 by allowing the smuggling of weapons and goods to the Gaza Strip. The cumulative effect of these developments was to leave Hamas physically isolated and without regional allies. Not surprisingly, Hamas leaders were desperate to find a way to escape this growing isolation.

Internally, some members of Hamas’ military wing may have also turned to violence in order to thwart the April 2014 reconciliation agreement which they saw as enabled by excessive Hamas concessions. Thus, the abduction and killing of the three Israeli teenagers on June 12—a development that spurred the recent escalation—may have reflected the desire of some among the military wing to thwart the reconciliation efforts.

Another important development was the Israeli government’s negative reaction to the Palestinian national reconciliation agreement. The reaction was propelled by the perception that given Hamas’ ideological commitment to Israel’s destruction, such a move cannot but imply a PLO retreat from its commitment to peace. The battle against the Hamas-Fatah reconciliation may have also induced Israel to view the aforementioned abduction and killing as a Hamas operation and to assert that in reconciling with Hamas, PA President Mahmoud Abbas had entered into a partnership with a murderous organization. In turn, such framing led the Israeli government to take another series of measures against Hamas, notably the re-arresting of tens of Hamas operatives who were previously released from Israeli jails in the framework of the Gilad Shalit deal. Hamas responded with escalating rocket fire against Israeli towns and agricultural settlements in the south, later reaching even north of Tel Aviv.

The cumulative effect of the different components of this strategic environment amounted to an incentive structure that favored escalation over stability. Israel felt that the newly created Palestinian national reconciliation government was legitimizing a movement committed to its destruction and Hamas felt increasingly isolated, if not strangled, and thus with little to lose.

Stabilizing Israel-Gaza relations would therefore require transforming this environment in at least two ways: first, affecting the intra-Palestinian balance by strengthening the Fatah-led PA while weakening Hamas; and second, altering the parties’ cost-benefit calculus in a fashion favoring peace and stability over war and destruction. Accomplishing this, in turn, would require that the parties involved make significant if not paradigmatic changes in their approach—changes that will then be translated into specific policy moves.

To contribute its share to stabilizing Israel-Gaza relations, the Israeli government would need to change its approach in the following ways: First, it would need to accept that Hamas is a permanent feature of the Palestinian scene—that while its military capacity can be degraded by recurring violent confrontations, it is a popular movement that cannot be destroyed—at least not at a cost acceptable to Israel.

Second, the Israeli government would need to finally resolve that Palestinian Authority President Mahmoud Abbas is its primary partner for stabilizing Palestinian-Israeli relations and for ultimately ending the two peoples’ conflict. In turn, translating this perceptual change to policy would require that Israel take meaningful measures to strengthen Abbas and weaken Hamas. Thus, it would need to completely reverse Israel’s long track record of doing exactly the opposite—rewarding Hamas violence as was the case with the Gilad Shalit deal while punishing Abbas as it did following the latter’s turn to gaining UN recognition of independent Palestinian statehood.

Third, Israel would need to radically change its approach to Palestinian national reconciliation: from viewing such efforts as a threat due to the implied legitimization of Hamas, to seeing it as an opportunity to obtain one Palestinian address for negotiations and deterrence.

Fourth, Israel should recognize that Hamas must be given something to lose—that Hamas’ inability “to deliver” on the population’s basic requirements because of restrictions imposed by Egypt and Israel makes it desperate to take any measure in the hope of escaping its present predicaments.

This four-dimensional paradigmatic change should induce Israel to take the following measures to empower President Abbas and to weaken Hamas while at the same time providing Hamas’ political leadership with incentives to favor accommodation over violence: First, Israel should help improve the Gazans’ living conditions by allowing a greater flow of goods and services and greater movement of people, between the West Bank and Gaza. Second, Israel should coordinate with the PA the deployment of Palestinian National Security Forces along the Israel-Gaza border and at the border crossings. Third, Israel should facilitate the holding of Palestinian elections and should refrain from thwarting the campaigning of Hamas’ political activists—action that only increases their electoral appeal. Fourth, Israel should allow greater PA security control over area A and greater civil control over Palestinians residing in area C. It should also remove remaining checkpoints and allow West Bank Palestinians greater access to Israeli, Gazan, and international markets. Finally and most important, Israel should facilitate renewed peace negotiations and should endow these talks with greater viability by ending settlement construction, by releasing pre-Oslo Palestinian prisoners, and by abandoning positions that insure such talks’ failure —for example, the demand that the IDF should remain deployed in the entire West Bank for a long period of time.

The changes required in Hamas’ approach if violence is to be replaced by stability are no less paradigmatic. First, Hamas must acknowledge that while it performed impressively during the last round of fighting, it will never be in a position to defeat Israel. In the end, Israel’s superiority will allow it to thwart Hamas’ military designs, as was clearly the case in the recent round of violence.

Second, Hamas must realize that by itself, its impressive military performance will never be enough to compel Israel, let alone Egypt, to reverse the set of restrictions that surround Gaza and render Hamas unable to meet the minimal requirements of Gaza’s population. Moreover, the horrific toll that Israel’s response to Hamas’ attacks took from Gaza’s population illustrated that any Hamas attempt to use violence in an effort to lift these restrictions will only exacerbate the plight of Gaza’s residents.

Third, Hamas must finally acknowledge that as long as it continues to define its goal as Israel’s destruction, no level of costs incurred will persuade Israel to accede to Hamas’ demands. Hamas must finally realize that without replacing—de-facto if not de-jure—its unlimited purposes with limited goals, it will continue to face a “mission impossible.”

The aforementioned paradigmatic change required of Hamas—without which it cannot escape its current strategic impasse—must lead the movement to make the following measures: First, it must allow the deployment of PA security forces along the Gaza-Egypt and Gaza-Israel borders and the placing of all the borders crossings under the full control of the PA. Second, it should allow the reconciliation government to exercise full control over the West Bank and the Gaza Strip. Third, it must show greater commitment to the unification process, including fuller commitment to the 2011 reconciliation requirement of implementing the “one authority, one gun” principle. Finally, Hamas should reexamine the historical record of its hostility toward Israel with a view to reconciling its attitudes toward “the two state solution” with those of the PLO whose ranks it seeks to join.