At Stake In the Singapore Showdown: America's Reputation 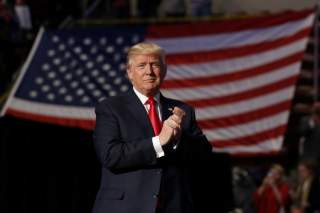 Singapore is precisely twelve hours ahead of Washington. This promises to be a boon for those media types that usually labor to produce and broadcast during the late night and wee small morning hours. For those of us surfing the net or watching screens small and large, it’s an insomniac’s dream. How can you avoid watching? Even Dennis Rodman is rumored to be in Singapore during the summit, on tickets paid for by dodgy interests. High diplomacy in the social-media era. It just can’t get any better.

This seemingly made-for-the-media event already spawns breathless coverage. It has all the elements of a good cliffhanger. Two consummate showmen vie for attention, and recognition as “winner.” Kim needs to come out of this with his lifetime tenure reinforced. Nuclear weapons are his guarantee against forcible regime change, at least from foreign powers. It helps at home, too. Nuclear proliferation is profitable. Kim’s “core supporters”—variously estimated as a million or so privileged citizens at home and abroad supporting the Kim family regime—must be kept happy at their current or better standard of living. Crime must pay. He’s had a good run of success so far. Summits with Xi Jinping, rumored visits from Assad (a nuclear co-conspirator) and others. He’s had some setbacks. It’s alleged he got the summit rescheduled by bending his knee. (No confirmation from North Korea.) Overall, though, it looks pretty good for Kim. Sanctions are already easing, “extreme pressure” is no longer approved rhetoric in the United States, commerce across the land borders is increasing, and the president of the United States is traveling halfway around the world to meet him.

President Trump needs to show that his unorthodox approach can produce results. A “peace treaty” has been called the easy part of this effort. But treaties generally follow, and officially sanction, extant conditions that support a cessation of hostilities. Treaties don’t create the conditions for peace, they follow the creation of conditions. This will not be Appomattox, Versailles, or the USS Missouri in Tokyo Bay. Nor will it be the Treaty of Portsmouth that ended the Russo-Japanese War in 1905. President Theodore Roosevelt—acting as a neutral arbitrator—won the Nobel Peace Prize for his negotiation efforts.

More than a few obstacles remain. The existing, and enduring, conventional threat from the world’s fourth-largest armed force remains—supported by a state with few visible legitimate means of support. Without dismantlement of the massive arsenal of tube and rocket artillery in deeply buried and hardened redoubts in the Kaesong Heights above Seoul, the threat remains. North Korean coercion and ability to commit deadly provocations like many in the past remains unaltered. Regardless of any resolution of the nuclear issue, if this conventional threat remains, then any piece of paper about peace is merely that. It will not be “peace in our time” merely with signatures, any more than the last time that phrase was famous.

The nuclear issue is neatly captured by the slight, but significant, different descriptions used by each party. We say “complete, verifiable, irreversible, denuclearization,” a demand that dates at least from the beginning of the Obama administration. We mean no nuclear weapons in North Korea. There are no such weapons in South Korea. Kim, for his part, wants “denuclearization of the Korean Peninsula,” understood to mean elimination of any nuclear capable forces on the peninsula. It does not require a lot of analytical rigor to determine who that is. Complying with that is trading forces in a long-justified defensive alliance against a self-declared foe in return for supposed reduction of an illegal aggressive threat. North Korean conventional dominance would be assured. It would pave the way for North Korean unification of the peninsula on their terms.

Our allies have survival interests at stake here. Japan is well within range of North Korean missiles, and North Korea’s ability to deliver nuclear weapons can be powerful coercion. Historical animosity remains high. Mines were floated on currents in the Sea of Japan from North Korea to Japanese shores in the active phase of the Korean War. The currents still run in that direction but the traffic across the sea is much increased. Any settlement that allows North Korea to continue to coerce South Korea and Japan is manifestly unacceptable.

More broadly, every one of our allies and friends are watching this Singapore stage. We created a system of allies from our World War II from enemies in the immediate aftermath of the worst war in the history of the world. Our “second generation of Founding Fathers”—Kennan, Acheson, Nitze and others—created a new system and a new set of institutions to prevent the reoccurrence of conflict following the disasters of the first half of the twentieth century. We championed the creation of democratic governments, aided the recovery of damaged nations, defended West Germany against Soviet pressure, and mid-wifed the emergence of values systems, specifically including human rights.

All this was done not as charity, but as calculated deft policy and strategy solidly in support of the interests of the United States. Human rights became our most valuable trait, our most compelling brand, during the Cold War. It’s how we communicated with captive populations. President Reagan’s Human Rights Day Speech on December 10, 1986, his “Tear Down This Wall” Speech at the Berlin Wall on June 12, 1987, and the Solidarity Movement in Poland through the 1980s were expressions of powerful forces—and human rights—that caused profound change. The global operating system created in this era allowed us to avoid a resumption of yet another great-power conflict despite the emergence of the Cold War and its many hot proxy conflicts. The Cold War ended without going hot, an unlikely outcome when viewed from the perspective of the early 1950s while we were fighting in Korea. In the second half of the last century hundreds of millions were raised from conditions of desperate poverty and misery to a better life. Peace was generally maintained. And we were “winners” in the Cold War.

We need to take good care of this system, and its rules and procedures, and yes, its values, lest we allow the emergence of the very conditions that lead to general conflict. That’s one more issue on the table in Singapore. It’s bigger than the two principals. The world awaits.