Standing Up to China Is Not 'Extremism'—It's Smart Foreign Policy 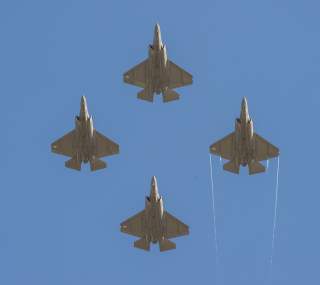 The Japan Times must be having a hard time finding copy to fill its op-ed pages. Exhibit A: a screed from an “adjunct senior scholar” at the Chinese Communist Party–affiliated National Institute for South China Sea Studies in Haikou, China, concerning U.S. strategy toward China in the age of Trump. In Mark Valencia’s telling, Donald Trump’s ascent to the presidency has liberated “U.S. China-bashers” to have a “field day” at China’s expense. “Extremism” rules the day in Washington and academic precincts.

Wicked times are afoot, you’d think. But bear in mind that a lot of things look like extremism to someone who’s fronting for an extremist regime. To build his case Valencia refers obliquely to “two academics from the Naval War College.” The nameless academics, he says, suggest that “America should revive its past ‘daring-do’ [we think you mean derring-do, Mark] and ‘recognize that close quarters encounters, cat and mouse games between submarines and opposing fleets, and even deliberate collisions’ could become routine elements of the U.S.-China rivalry.”

We confess to being the scurrilous duo. The passages Valencia quotes come from an article we wrote for Orbis, a journal published by the Foreign Policy Research Institute. (Look for the article here since he doesn’t bother furnishing a link.)

We compiled the article long before the election, and aimed it at whichever candidate might prevail. Our bottom line: China is already competing with America in the China seas and Western Pacific. Close-quarters encounters between Chinese and American ships and planes are already routine elements of the U.S.-China rivalry—just as they were between Soviet and American ships and planes during the Cold War. And Chinese seamen and airmen initiate these encounters.

Washington can either wrest the initiative away from Beijing, or it can remain passive and continue losing ground in the strategic competition. Better to seize the initiative. To do so the new U.S. administration must relearn the art of deterrence, and to deter Chinese aggression the administration must accept that hazards come with the territory. That’s Strategy 101—basic stuff for anyone fluent in statecraft.

Valencia is a lumper. He lumps our analysis with other commentators’ views, many quite different from our own, before attempting the equivalent of an op-ed drive-by shooting. All of our views are equivalent for him; all are expressions of “extremism.” The others—Gordon Chang and James Kraska, to name two—can doubtless speak up for themselves should they choose. We’ll stick to speaking up for ourselves.

And anyone who takes the trouble to read our item—download early, download often—will realize Valencia excerpts a couple of quotations out of context and retrofits them to a predetermined storyline. First write conclusion, then fit facts to it!

Let’s go through this point by point. First, Valencia implies that Trump’s victory initiated our analysis. “This deluge,” he opines, “was stimulated by statements by Trump and his nominees for secretary of state, Rex Tillerson and secretary of defense, James Mattis.” He goes on to assert that such “statements by incoming government leaders and influence peddlers provided an opportunity for America’s China hawks to promote their views.”

Valencia has it precisely backward. And a simple internet search would have revealed the blunder before he committed it. Explains Orbis editor-in-chief Mackubin Owens helpfully: “This special issue of Orbis features articles by FPRI associates offering ‘advice to the next president.’ Written before the election [our italics], these essays offer recommendations for national security affairs in general, as well as for regional issues.”

And so it was. We drafted the article in August—months ahead of the election, and when Hillary Clinton remained the odds-on favorite to win the White House. We assumed a Clinton administration would be the primary audience, but wrote it to advise whoever might prevail in November. In short, this was a nonpartisan venture, compiled in the spirit of our running counsel to the Obama administration.

And it should have bipartisan appeal. As secretary of state, it’s worth recalling, Clinton was also the architect of America’s “pivot,” a.k.a. “rebalance,” to Asia—an undertaking aimed at counterbalancing China. Considering China’s record of bellicosity in maritime Asia, and considering Clinton’s diplomatic past, we had good reason to believe that she and her lieutenants would prove as receptive to our message as Trump.

More so, maybe. In any event: it’s misleading and false for Valencia to accuse us of devising “U.S. tactics in the Trump era.” We are devising strategy to deter a domineering China—no matter who occupies the Oval Office. That our article appeared after Trump prevailed represents mere happenstance.

Second, Valencia insinuates that we hold extremist views. Well, we guess so…insofar as anyone who wants to deter an aggressor from further aggression entertains extremist views. Deterrence involves putting an antagonist on notice that it will suffer unacceptable consequences should it take some action we wish to proscribe. It involves fielding military power sufficient to make good on the threat, whether the requisite capabilities be nuclear or conventional. And it involves convincing the antagonist we’re resolute about making good on our threats.

We’re glad to keep company with such hardnosed practitioners of deterrence as Harry Truman, Dwight Eisenhower, and John Kennedy—extremists all, no doubt. Statesmen of yore made Moscow a believer in American power and resolve—and largely held the line against communism.

Except in that trivial sense, though, there’s nothing extreme about our argument. We maintain that China and the United States are pursuing irreconcilable goals in maritime Asia. The United States wants to preserve freedom of the sea, China wants anything but. Both contenders prize their goals, and both are presumably prepared to mount open-ended efforts of significant proportions to obtain those goals. If Beijing and Washington want nonnegotiable things a lot, then the Trump administration must gird itself for a long standoff.

We also point out that China embarked on a massive buildup of maritime power over a decade ago. Excluding the U.S. Navy’s Pacific Fleet, Beijing already boasts the largest naval and coast-guard fleets in Asia, not to mention a seagoing militia to augment its navy and coast guard. And these forces continue growing. China’s navy may number over 500 vessels by 2030. By contrast, the U.S. Navy espouses an eventual fleet of 355 vessels, up from 274 today. President Trump is on record favoring a 350-ship force. Defense budgets may—or may not—support a U.S. Navy that large.

These are objective facts about which the Chinese media regularly brag. Based on these material trends, we postulate that maritime Asia is becoming increasingly competitive, that China is a formidable competitor, and that the trendlines are running in its favor. How’s that for extreme?

We thus urge U.S. policymakers to acknowledge that the forward U.S. presence in Asia will come under mounting danger in the coming years. Washington may have to gamble from time to time to shore it up. It may have to hold things that Beijing treasures—things like the Chinese navy’s surface fleet—at risk. We encourage decision-makers to embrace risk as an implement of statecraft rather than shy away from it. Manipulating and imposing risk is a universal strategy that practitioners in Beijing routinely employ. Washington should reply in kind.

And as Valencia well knows—or should know—risk-taking constitutes part of the art of strategy. The approach we recommend is well-grounded in theory, as articulated by the late Nobel laureate Thomas Schelling and many others.

There is nothing novel about risk, then. U.S. leaders must rediscover this elemental fact. For too long Washington recoiled from taking risk, treating it as a liability while conflating it with recklessness. But a risk-averse nation has a hard time deterring: who believes a diffident statesman’s deterrent threats? We simply implore civilian and military leaders to realign their attitude toward risk to match the changing strategic landscape in Asia. Nothing ventured, nothing gained.

Our argument, then, is a far cry from the extremism Valencia deplores in his hit piece. A casual reader of his commentary can be pardoned for concluding that we advocate reckless action on the U.S. Navy’s part. But it’s Valencia who failed his audience.

Third, Valencia claims that because of recent statements from U.S. policy-makers—and by implication because of our writing, which he falsely depicts as a product of those statements—“the damage to the U.S.-China relationship and the stability of the region has already been done.” But what damage is he referring to? As of this writing, the Trump administration has been in office less than a week. The White House has issued no official policy touching the South China Sea. As far as we know, our fleets in the Western Pacific have done nothing unusual.

Valencia, it appears, is objecting to a few China-related tweets from Trump following the November elections. Valencia is indulging in hype.

China, by contrast, has inflicted colossal damage on regional concord. Beijing has repeatedly intimidated the Philippines, Vietnam, and Japan in offshore areas. It has built islands occupying thousands of acres of land in the heart of the South China Sea. It has fortified these manufactured islets, breaking President Xi Jinping’s pledge not to militarize them. It has rattled its saber through successive military drills, and issued stark warnings about war through various media mouthpieces.