Stars Are Aligned for a Solution in Cyprus 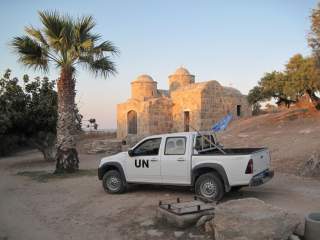 The Cyprus problem is at a critical juncture as there exists a unique opportunity for its solution. If this opportunity is utilized, a united Cyprus will be the keystone of a wider area of cooperation and stability in the Eastern Mediterranean and beyond. A glance at the issues that are affected by or directly resulted from the prolongation of the problem clearly highlights the need for an early settlement in Cyprus.

The 50th Year on the UN Agenda

The Cyprus problem has been on the agenda of the United Nations for half-a-century. For decades, it has consumed considerable diplomatic and political effort, domestic and international alike, but to no avail. As such, it has gained a reputation as an intractable and inexorable problem that eluded an ultimate settlement. The island of Cyprus, nearly half the size of the state of Connecticut, has subsequently become synonymous with conflict, despite its nostalgic narrative as a haven of peaceful coexistence. Since the drawing of the Green Line in 1963, Nicosia, the Janus-faced capital of both North and South Cyprus, remains today as the last divided city in Europe and the only divided capital in the world. However, the Cyprus problem has to change face and move on from this conundrum characterized by a relentlessly enduring state of conflict to an inspirational success story of peace. Time is ripe for such a change, especially in view of current dynamics that are molding together both on the island and in the region.

April 24, 2014 marked the 10th anniversary of the referenda held on the UN Comprehensive Settlement Plan (the Annan Plan) on both sides of the island. This was the first time in the history of Cyprus negotiations that a comprehensive settlement document, comprising 9,000 pages, was put to separate simultaneous referenda. The Turkish Cypriots accepted the plan with an overwhelming majority (65 percent), despite the great sacrifices it entailed for them. They did not only vote in favour of a solution, but also for moving beyond the traumatic past and building a common future within the EU through a new partnership with Greek Cypriots. Unfortunately, the Plan failed due to the resounding ‘no’ vote (76 percent) of the Greek Cypriots. Nevertheless, the Turkish Cypriot aspiration for a solution has prevailed even in the face of deep frustration ensuing the Greek Cypriot rejection of the Annan Plan and the continued isolation imposed on Turkish Cypriots in all aspects of life. The fact that they have been left out in the cold, while the Greek Cypriot side has unilaterally become a member of the EU, did not change the Turkish Cypriots’ resolve for settlement. Yet, it further complicated the prospects of reconciliation on the island.

Thriving Opportunities from Within

Against this background, the Turkish Cypriot side has intensified its endeavors to overcome this crisis of confidence and engaged sincerely with the Greek Cypriot side for the preparation of the ground for a new dialogue. Subsequently, the two sides were able to initiate a series of agreements in early 2008, which paved the way for the resumption of full-fledged negotiations after a four-year stalemate. Since then, intermittent negotiations have been underway, with significant progress attained on the majority of the chapters of the Cyprus problem as a result of the intensive efforts put forward by the two sides in reaching convergences. Furthermore, with the recent agreement on the Joint Declaration of February 11, 2014, an important milestone in the negotiations has been reached, which clearly provides for the broad outline of a solution and the main principles upon which the new partnership will be established. Hence, the announcement of the Joint Declaration triggered a very positive atmosphere that was further fostered by the support of a wide spectrum of actors on both sides as well as the extensive espousal received by the international community.

The Far-Reaching Consequences of the Problem

In light of this promising political climate on the island, combined with the existence of some external factors that are currently at play, there is an historic opportunity that should not be missed in bringing the long-overdue Cyprus problem to a closure. The recent developments in our region strongly signal a pressing need in this direction. It is beyond doubt that the Cyprus problem holds back the potential of cooperation in a broader context. Since its conception, the relations between Turkey and Greece have been negatively affected by it. A full-scale rapprochement between the two countries has been held hostage to the chronic status quo on the island. In the course of time, this has been exploited as an excuse to oppose Turkey’s bid for EU membership through the blocking of some chapters in her accession talks. EU-NATO strategic cooperation has also been hampered in a similar fashion due to the non-existence of diplomatic relations between South Cyprus and Turkey. As a NATO member, Turkey has proven to be an indispensable strategic partner of the Transatlantic cooperation since the inception of the Cold War. Although a NATO Council decision in late 2002 enabled the participation of the non-EU members of NATO in the European Security and Defense Policy (ESDP), the Greek Cypriot side has been blocking Turkey’s involvement both in the ESDP and her prospective membership in the European Defense Agency (EDA). As a result, no meaningful dialogue can practically be established between the EU and NATO, creating a situation whereby the Cyprus problem is literally obstructing the deepening of the EU-NATO strategic relations. The current crisis in Ukraine clearly highlighted, once again, the need for closer cooperation between the two institutions.

The crisis in Ukraine also brings forward the necessity of alternative energy supplies en route to Europe. Recently, the island of Cyprus has driven considerable attention as a result of the newly found energy reserves in the Eastern Mediterranean. Common sense dictates that Turkish Cypriots and Greek Cypriots, together with neighboring countries, adopt a win-win approach and share the benefits of the natural resources of the region on an equitable basis. Such cooperation and the resulting interdependency could only bring much needed stability and prosperity to the region and help restore the ties between Turkey and Israel.

The Promise of a Solution

Cyprus lies at a strategic crossroads between the East and the West. However, as all these developments indicate, the island’s full potential can only be utilized with the solution of the Cyprus problem. A solution will not only provide for peace on the island, but will also prompt a wave of cooperation in its wider region. Therefore, all relevant actors, including the two sides on the island, should act in a spirit of good-will and compromise in bringing an end to this half-century-old problem. The Turkish Cypriot side is ready to do its utmost in this regard, with a view to realizing the island’s destiny to become a hub for peace and stability rather than a source of conflict and tension.

Özdil Nami is the Minister of Foreign Affairs for the Turkish Republic of Northern Cyprus.