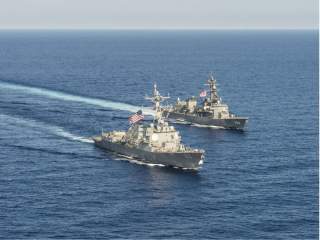 As North Korea dangerously escalates regional and global tensions with its fourth nuclear detonation, the United States can ill afford further strategic ambiguity in its intentions and policies in East Asia. Yet, that is precisely what the Obama administration is offering in its muted and somewhat muddled response to China’s expansionist actions.

With Beijing accelerating its unlawful island-building and assertion of sovereignty in regional waters last year, members of Congress and policy experts pressed the Obama administration to ensure freedom of the seas as traditionally guaranteed by the U.S. Navy.

Senate Armed Services Chairman John McCain and others called repeatedly for a Freedom of Navigation operation (FONOP) in the international waters within twelve miles of China’s latest construction site (an area also claimed by other countries).

Congress urged the administration to disabuse Beijing of any idea that it could unilaterally create new rights for itself in violation of the United Nations Law of the Sea Convention (UNCLOS) or customary international law.

But for months the Navy was prevented from acting while it continued to engage China in military-to-military talks. Eventually, as congressional pressure mounted, the administration first hinted, then explicitly stated, that it would make such a naval challenge.

On October 27, the USS Lassen transited within twelve miles of China’s manmade island, but confusion immediately erupted as to whether it was in fact a FONOP.  A Pacific Fleet source described it as “innocent passage” (IP).  IP occurs when a foreign naval vessel enters what it concedes are another country’s territorial waters, and does so in less than its normal operational mode—e.g., with its weapons and radar deactivated. But within hours the Navy retracted that characterization, while declining to state that it had been a straightforward FONOP.

To compound the confusion, Defense Secretary Ashton Carter, testifying before McCain’s committee days later, repeatedly refused to confirm that any kind of Navy passage had occurred even though it had been widely reported in the media.

An angry McCain finally managed to get a grudging acknowledgement from Carter: “I can say what you read in the newspaper is accurate but I don’t want to say more than that.” Dissatisfied with the secretary’s opaque and evasive answers, McCain fired off a letter after the hearing demanding that he provide a fuller, more direct explanation of just what the Navy had done.

Over the Christmas holidays, Carter sent a letter replying to McCain’s questions. As to whether the administration had informed China in advance of the passage, Carter wrote “there was no prior notification to any of the claimants”—even though U.S.-China military talks had been ongoing throughout this months-long period and even though the administration had publicly announced its intentions a few days before the event.

It may well be that in its talks with the Chinese, the Navy did not identify which ship would conduct the operation, or its precise course and timing, but the imminent fact of the passage was surely no surprise to Beijing, however much it expressed or feigned its anger. Indirectly, Washington and Beijing may have reached an understanding about the nature of the passage and its stated legal basis.

To avoid a confrontational posture, the United States may have refrained from conducting an actual FONOP challenge and instead employed the more permissive-sounding innocent passage—which, like a FONOP, does not require prior notice under UNCLOS but, unlike a FONOP, implies recognition of the coastal nation’s sovereignty claim.

That possibility is enhanced because of Carter’s written answer to the question: was the Lassen transit a FONOP or innocent passage?  Remarkably, the letter said it was both, at least for now. While referring to it as a FONOP no less than eight times in the letter, the secretary then states:

“The FONOP involved a continuous and expeditious transit that is consistent with both the right of innocent passage, which only applies in a territorial sea, and with the high seas freedom of navigation that applies beyond any territorial sea . . . Given the factual uncertainty [of island claims], we conducted the FONOP in a manner that is lawful under all possible scenarios to preserve U.S. options.”

With this statement, the administration purports to create an entirely new hybrid class of maritime operations—call it “IP-plus” or “FONOP with fingers crossed.”

But such a dual legal basis is simply not possible under UNCLOS or customary international law—it has to be one or the other.  The Lassen was either in normal operating mode (FONOP) or it was not (IP); the United States either conceded the validity of China’s claim (IP), or it did not (FONOP). By using a lowest common denominator approach, the Lassen logically must have done what the Navy originally said it did—that is, conduct an innocent passage, at least temporarily (TIP?), not a FONOP.

Even more seriously for the myriad of conflicting claims in the South China Sea and globally, Carter's letter suggests a novel theory that might give some colorable validity to China's island grab. The secretary of defense speculates that appending the claimed zone of the artificial island to that allowed for a legitimate natural one in the area may somehow accomplish indirectly what UNCLOS prohibits from being done directly.

Such a precedent introduces entirely new levels of complexity and potential conflict to the law of the sea. In straining to accommodate Beijing, the administration is creating significant risks for the maritime order.

McCain generously gave Carter a pass for “provid[ing] a needed explanation of the legal intent behind the operation in the face of much confusion and speculation.” But he went on to excoriate the administration for not conducting any further, clarifying operations since the Lassen’s quixotic venture.

Joseph A. Bosco is a member of the U.S.-China task force at the Center for the National Interest. He was a China country desk officer in the office of the secretary of defense and served in the U.S. Navy as a communications officer aboard a Seventh Fleet flagship.