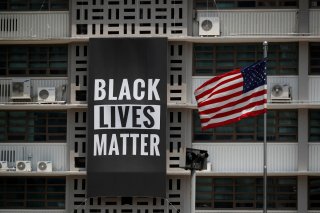 America’s giant embassy in Seoul isn’t issuing routine passports or conducting other services that Americans abroad may need, but it is promoting a leftwing political message at taxpayer expense.

Like most federal government employees, the bureaucrats who populate the embassy are largely being paid not to work. If you urgently need a birth certificate or replacement passport for anything other than a life-threatening emergency, you’re out of luck. If you’re a U.S. company looking for help doing business in South Korea, forget about it.

But this pampered set of employees, led by a former Navy admiral, Harry Harris, did take the risk of going to the office in order to hang a large, two-story Black Lives Matter political slogan on the embassy’s exterior. Staff also used the embassy’s web page and Twitter account to brag about the sloganeering.

You might wonder what this has to do with diplomacy between the United States and South Korea. That remains unclear. What is clear is that your taxes are advertising a political movement that is currently calling for defunding police departments across the United States.

According to a recent poll, that idea has the support of just 16 percent of Americans. The proposal has been rejected not only by President Donald Trump—who ostensibly sets policy for the executive branch of which our embassy in Seoul is a part—but also by leading Democrats. Senator Joe Manchin (D-WV) was succinct when he said the idea was “stupid,” “crazy,” and that “anyone who talks about that is nuts.”

Even the progressive mayor of Minneapolis, who appeared before a Black Lives Matter crowd, subjecting himself to a Chinese Cultural Revolution-like struggle session, replete with apologia, declined to agree to disband the police. The crowd booed him away.

That isn’t the only political activity of the Black Lives Matter organization. It also raises funds for political causes it declines to disclose.

So then, why the endorsement from our ambassador to South Korea and the diplomatic mission he leads? One can try to discern intent from the ambassador himself, who tweeted about the banner: “I believe in what President JFK said on June 10, 1963 at American University: ‘If we cannot now end our differences, at least we can help make the world safe for diversity.’ USA is a free & diverse nation...from that diversity we gain our strength.”

You can be forgiven for thinking that doesn’t quite sound like our thirty-fifth president, John F. Kennedy, who died about twenty-five years before “diversity” (of innate traits, not ideas) became the synonym for virtue among our educational, cultural, and ultimately corporate elite. Indeed, Kennedy was directing his words to Soviet Premier Nikita Khrushchev, hoping to convince the belligerent communist leader that the free world and the communist bloc could coexist peacefully—a diversity of government systems. The speech had nothing to do with race, something that takes about twenty seconds on the internet to confirm.

But we live in a time where little attention is given to historical accuracy, even by ambassadors with bloated staffs of well-paid people who are supposed to know better. Also presumably left unchecked is whether the embassy’s politicking is a violation of the Hatch Act, which plainly prohibits using government funds or premises for domestic political activities. Setting aside legality, there is the matter of why a U.S. embassy that should be espousing America to foreigners is instead highlighting those most critical of America.

But then that is the whole point. Flying the banner in reality has little to do with race or equality, and everything to do with opposition to Trump. For the left-leaning Foreign Service officers at the embassy, like the rest of the deep state and larger ruling class, the foremost goal is undermining and defeating Trump. The banner is a giant middle finger directed at the boss in Washington, taking advantage of a political firestorm the sloganeers think puts them beyond reproach.

Harris, who is a political appointee, is supposed to be a check on activities like this. So is his immediate boss in Washington, Assistant Secretary of State for East Asian Affairs David Stilwell, another retired flag officer. But to quote Winston Churchill, himself targeted in recent days by Black Lives Matter protesters who vandalized his statue and targeted one nearby of Mahatma Gandhi, Harris and Stilwell are modest men who have much to be modest about.

Despite holding senior positions related to defending America from the increasing Chinese threat in East Asia, they seem unable or unwilling to back Trump and his policies with any energy. Both are a testament to the shortcomings of the Trump administration’s personnel failures, which have time and again put Trump’s presidency in jeopardy.

But it’s never too soon to start righting the ship: fire Harris, take down the banner, and tell the diplomats to wage political warfare against China, not America.