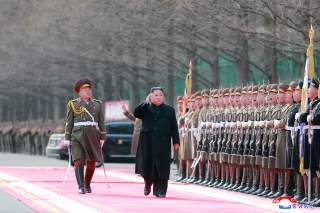 A few days ago, I had a mini-debate on Twitter with Harry Kazianis, the Center for the National Interest's Director of Korea studies and Executive Editor of the National Interest, that illustrated one of the basic divisions of thinking on the upcoming second summit between President Donald Trump and North Korean leader Kim Jong-un.

Harry argued, as do many proponents of the Trump-Kim summits, that they are preferable to an alternative, which many people believe will include “use of force.” Trump famously threatened in 2017 that “fire and fury” would “totally destroy North Korea.” The working assumption of many in the debate about the recent engagement with North Korea is that if it fails, then we slide back to potential conflict.

This may well be true. Trump is famously belligerent and impulsive. One could easily see him frustrated by the slow course of talks and North Korea’s notorious tendency to foot-drag and hair-split negotiations so that they drag on for years. Indeed, that already seems to be happening. North Korea has not actually given up much following the first Trump-Kim summit, no matter how much the United States and South Korean presidents talk as if it has. At some point, this reality will burst through Trump’s self-constructed narrative of success with North Korea.

At that point, Trump may, as Harry and so many others fear, reach back to the military options of 2017, buttressed by a sense of anger and betrayal. A war after a failed series of summit negotiations is more likely than war was before the summits, because if leader-level talks cannot break the impasse, then there is really nothing else to do on the Northern nuclear issue, and nowhere else to go. If direct meetings among the apex leaders do not generate an acceptable outcome on the nuclear question, then the North Korean nuclear program is here to stay. Trump may then see no other option than to fight.

The logic, then, is that the United States must find a deal, because the alternative is too horrible to contemplate. And indeed, if the only alternate is war, then Harry and others who share his perspective are correct. This logic suggests that any deal is better than none. Hence, a balance-negative deal, one in which North Korea gives up a little while the United States gives up a lot, is nonetheless a preferable outcome to a summit failure because next comes a war.

But this logic only holds if the only alternative is conflict. I remain convinced that this is inaccurate, or, to be more specific, that this thinking overly narrows our choices. Trump may be talking this way rhetorically to scare the North Koreans into taking the negotiations seriously. If Pyongyang sees its choice-set as either negotiating seriously and in good faith with the Americans, or getting bombed, it will likely choose the former. So perhaps the Trump White House is speaking rhetorically to set the bargaining table.

But if the Trump team is serious, and Harry suggests that they are, then this is a false choice. The status quo, as frustrating as it may be, is superior to either a bad deal or war. By the status quo, I mean the long history of South Korea, the United States, and Japan containing and deterring, sanctioning and isolating North Korea.

Certainly, this a frustrating outcome. Much of the hype around the outreach efforts of the South Korean and American presidents likely comes from this frustration. The Korean stalemate feels interminable; long after similar stalinist states disappeared, North Korea somehow hangs on. So maybe Trump or South Korean President Moon Jae-In can pull a cat out of a hat in their engagement with Kim and finally break this tedious log-jam.

But if they cannot achieve that goal, then they will return to contemplating war. The world can learn to adjust to a nuclearized North Korea. South Korea and Japan have long lived under conventional and missile threat from North Korea. The United States has long lived with nuclear threats from the Soviet Union and Russia, and China. India and Pakistan, with a long history of contention, have both adapted to the other’s nuclearization without conflict. It can do with North Korea too.

Nuclear deterrence is not ideal. It is indeed scary, as so many Cold War moments like the Cuban Missile Crisis demonstrated, and there are genuine concerns that nuclear states are often far too reckless on nuclear safety. But nuclear weapons states have not used them against each other. Since Nagasaki, there has been no battlefield use. The fact that North Korea has nuclear weapons does not mean they will use them.

In short, we can deter North Korean nuclear use, just as we have China and Russia. In fact, it is far more likely that North Korea built these weapons to deter us—the United States has a long record of regime-change assaults on rogue states—rather than to offensively strike the U.S. homeland.

Obviously, this is sub-optimal. Ideally, “art of the deal” Trump can negotiate a balance-positive deal that gets the nukes from the North at minimal cost. But this is unlikely. North Korea will almost certainly insist on keeping most of its warheads. Washington need not make reckless, desperate concessions, such as the removal of U.S. forces from South Korea, to try to get these, as nuclear deterrence with North Korea is stable. Nor must it fight, for the same reason.

The status quo is uncomfortable and frustrating, and our adjustment to nuclear deterrence with North Korea will be grudging. But it is not so unstable or dangerous that Washington needs to make wild concessions or threats. Trump need not gamble at Hanoi. Slow-but-steady, reciprocal, and verifiable concessions is still the best way forward.