The "Stay Forever" in Syria Troop Trap Has Failed 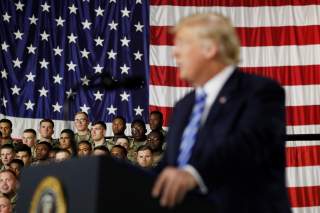 National Security Advisor John Bolton and Secretary of State Mike Pompeo have both recently made overt assertions that despite President Donald Trump’s declarations to the contrary, U.S. troops should remain until “every last Iranian boot” is out of Syria. In other words: forever.

Despite what establishment Washington voices say, the perpetual deployment of U.S. combat troops in Syria (and Iraq and Afghanistan) not only fails to keep us safe here, it damages our ability to effectively defend ourselves against potential threats elsewhere.

At the heart of these “stay forever” arguments is the belief that to withdraw any troops from the Middle East is to invite attack against the United States. Former Chairman of the House Armed Services Committee, Rep. Mac Thornberry, claimed that to withdraw from Syria or Afghanistan is to invite ISIS and other terror organizations to “spring back to life.”  Sen. Lindsey Graham claimed that withdrawing would “pave the way” for a second 9/11. However, a quick review of America’s history in the Middle East quickly exposes those fears as irrational.

The first time the United States sent combat troops to the Middle East was in July of 1958. At that time, Iraq was governed by the pro-U.S. Hashemite royal family, and Iran was under the U.S.-installed Shah; Egypt and Syria were among America’s biggest foes.

But Iraq’s King Faisal, the crown prince, and the prime minister were murdered in a violent coup. Eisenhower sent fifteen thousand U.S. troops there in a show of force because he was afraid the coup would have a “domino effect” and cause other friendly regimes in the region to have coups, moving them into the Soviet’s orbit. By October 1958, however, the president concluded the danger had passed and ordered the withdrawal of the military from Lebanon.

In August of 1982, President Ronald Reagan ordered eight hundred Marines to Lebanon as part of a multinational military peacekeeping operation to assist in ending the Lebanese civil war. The military was never given an attainable military mission, however, and the objective of the deployment shifted over time. In October of 1983, tragedy struck when Hezbollah terrorists attacked the Marine barracks with a suicide truck bomb that killed 241 Americans.

On February 7, 1984, Reagan determined that while he considered the attack outrageous, expanding the mission to go after the perpetrators and likely getting embroiled in a civil war was not in America’s interests and he ordered their withdrawal. Many criticized Reagan for his refusal to go after Hezbollah, but events proved his actions right: no more American troops lost their lives and the United States did not get bogged down in the civil war.

From 1958 until 1990, aside from these two exceptions, there were no American combat troops active in the Middle East. This brief recitation of America’s military engagement exposes an important point directly related to our many permanent military deployments throughout the region:

– Before 1958 (when America deployed no troops to the Middle East) the region was very chaotic.

– During thirty of the thirty-two years between 1958 and 1990 when no American troops were in deployed in the region, the Middle East was very chaotic.

– Since we began our permanent wars in Iraq and Afghanistan, the region has been very chaotic.

The point should be painfully clear: the Middle East is a violent and chaotic place, and it hasn’t mattered whether American troops were engaged there or not—and the nature of the region won’t change after we leave. Amidst all of this chaos, however, the security of the American homeland was guaranteed by our overwhelming conventional and nuclear deterrent.

Continuing to keep tens of thousands of American military, contractor, and government officials deployed overseas in military occupations with no clear objective are not merely pointless, but they degrade our ability to protect the American homeland from potential existential threats that may arise.

I have fought in large-scale tank-on-tank battles, traditional counterinsurgency fights, and foreign military training missions. I also served in Korea in the 1990s against the backdrop of a perpetual threat of large-scale battle, in Germany during the Cold War patrolling the East-West border between the Soviet Union and Western Europe, and served as the second-in-command of an Armored Cavalry Squadron.

The long-term effects of detracting our operational and training focus away from preparing for peer-on-peer fights since 9/11 has unquestionably reduced America’s ability to fight and win major conventional wars.

It would truly be a tragedy if we had an unexpected need to fight a major regional conflict and suffered greater casualties because we were overstretched and over-involved in small-scale combat operations around the globe that had no relation to our security.

America is not made secure by permanent combat deployments overseas. Its security is assured by robust global ISR regardless of where threats arise on the planet, and current U.S. deployments degrade our ability to fight potentially existential fights. Given these truths, we must not only withdraw our combat troops from Syria, but also Iraq and Afghanistan. The longer we delay taking these necessary steps, the longer our genuine security remains unnecessarily high.