Staying in Afghanistan is the Definition of Insanity 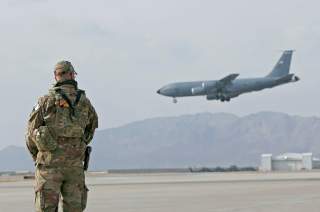 Last week, House Armed Services Committee Chairman Rep. Mac Thornberry returned from a trip to Afghanistan and proclaimed, “reconciliation can lead to a representative political solution and a sustainable U.S. presence in Afghanistan . . . [because that] is the only way we can reliably defend America from the dangerous terrorist organizations that continue to operate in Afghanistan.” If that sounds familiar, it should. It’s just more of the same old Washington groupthink: “stay the course.” But we’ve been staying the course now for over seventeen years with no end in sight. This is the very essence of the definition of insanity: doing the same thing over and over again but expecting different results.

To begin, while it would certainly be preferable to have a representative, multiethnic, democratic government in Afghanistan, that is not essential to American interests. Ultimately, U.S. national security is served as long as whatever government controls Afghanistan understands that the United States will not tolerate support for or the harboring of any terrorist group with global reach that directly threatens the United States. Al Qaeda and ISIS are terrorist threats in Afghanistan, but neither represents a direct, existential threat to the American homeland.

Moreover, it is not up to the United States to engineer a solution in Afghanistan. It is important to remember that outside intervention and meddling in internal Afghan politics is a main cause for Afghanistan’s current state. The truth is that Afghanistan was a relatively stable country from 1930 through 1978—even though it did not have a multiethnic, representative, democratic government. The emergence of the Taliban regime that supported Al Qaeda was due almost entirely to outside interests and influences. First, the Soviets tried to exert control over Afghanistan. Then the United States—as part of its Cold War strategy to contain expansionist Soviet Communism—supported the anti-Soviet mujahideen who had no real affinity for the United States but were more than happy to accept U.S. guns and bullets to expel the Soviets. But they also turned out to be the most extreme Islamic radicals. Indeed, one of those mujahideen was none other than Osama bin Laden. Therefore, the real lesson is not that the United States hasn’t done enough and needs to do more, but that there has already been enough outside meddling in Afghanistan.

Furthermore, “a sustainable U.S. presence in Afghanistan” (presumably, a military presence) isn't a prerequisite for U.S. national security. The United States is not engaged in a war of national survival in Afghanistan and, therefore, there is no need for a continued presence. The reason the U.S. military is a target in Afghanistan is because it is there. As such, it is a lightning rod to easily generate opposition from Afghans, who have a rich history of fiercely defending themselves against foreign invaders (witness the former Soviet Union in the 1980s).

Finally, Representative Thornberry’s argument to continue to stay the course is totally devoid of the mounting costs. According to the Pentagon, the war in Afghanistan currently costs $45 billion per year. A report published last year by the Center for Strategic and International Studies states that Department of Defense Overseas Contingency Operations funding for the Afghan conflict from fiscal year 2001 to fiscal year 2018 would be more than $840 billion. The true cost of seventeen years of war and counting will likely be in the trillions of dollars.

Given that the neither the Taliban, nor Al Qaeda, nor ISIS in Afghanistan are existential threats to America, it’s well past time to stop the insanity.