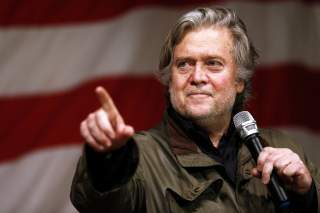 The rest of the over half-hour interview will be released with the launch of TNI’s new site.

But Bannon broke news during our discussion. The president’s former consigliere thinks Special Counsel Robert Mueller’s probe into the Trump campaign’s activities and possible dealings with Russia will be suspended.

The waters have been too muddied by recent events.

“I don’t even know if we’re going to get to pardons,” Bannon told me. “The underpinnings of the whole Russia investigation” have been threatened by recent revelations of government misbehavior—namely, “Strzok and Page, and that whole crowd” Bannon said.

“That’s going to put the whole Mueller thing on hold,” Bannon said. “For right now. … I think you’re going to see in the coming week, you’re going to see a number of very sophisticated—and these are not Trump supporters—lawyers in town, in Washington, writing analysis… They have to fully vet the underpinnings of the entire Mueller investigation.”

For Bannon, this is House Speaker Paul Ryan’s sink or swim moment.

Bannon gave a speech to House conservatives last week at Washington’s Capitol Hill Club. It was well-received, at least among his target audience. Bannon was once persona non grata with many Republicans after his spat with the president in January. But last week, leading House conservative Steve King proudly tweeted out a photo of himself with Bannon after his address.

“I do not believe so,” Bannon said, on if Ryan will serve out his time in office as speaker.

Talk of Kevin McCarthy, the majority leader, or Steve Scalise, the majority whip, or a Freedom Caucus heavyweight such as Mark Meadows or Jim Jordan replacing Ryan ahead of the November election dominates Capitol Hill.