Steve Bannon’s War On Susan Thornton Is Back On 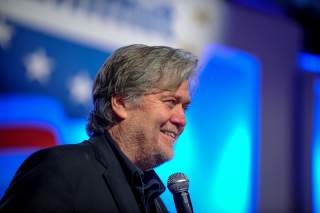 In late December, when I profiled Stephen K. Bannon and his war on Thornton—a policy veteran widely distrusted by China hawks—former Secretary of State Rex Tillerson had tapped Thornton as Assistant Secretary of State for East Asian and Pacific Affairs as a show of force against Bannon and the would-be saboteurs of his tenure.

Of course, everyone knows what happened. Rex Tillerson is out, and Mike Pompeo is in.

“I am the biggest China hawk alive,” Bannon has told me. “I’m a China uber-hawk.” Bannon has railed against moderate Republicans: “I’m a radical.”

Bannon fiercely approves of Pompeo—as the National Interest has reported, and has a stronger relationship with him than he ever had with Tillerson.

The ascension of Pompeo, who commands the loyalty of Bannonites and neoconservatives, provides a useful template for how Thornton might get taken out.

And doubtless: Pompeo has little incentive to provide cover for Tillerson’s pick. Secretary Pompeo didn’t even thank Tillerson in his introductory remarks to State employees earlier this month, instead taking veiled shots at him throughout.

Indeed, the opposition to Thornton’s nomination by Sen. Marco Rubio is big trouble for the diplomat. Rubio’s office pointed me to his remarks this week.

“This is why I will do all I can to prevent Susan Thornton from ever being confirmed as Asst Secre­tary of State for E. Asian & Pa­cific Af­fairs. She is in Tokyo undermining @POTUS by advocating for partial surrender of nukes by #NorthKorea as acceptable” Rubio tweeted this week. “This is something he’s been watching for some time now,” a top Rubio aide told me.

Rubio’s rationale, of course, is where the tacit alliance with Bannon breaks down, and emblematic of the broader divide on the China hawk.

Bannon is a restrainer on North Korea.

“There’s no military solution [to North Korea’s nuclear threats], forget it,” Bannon famously told Robert Kuttner of The American Prospect last summer, during his last days in the White House. He has since told me much the same. “Until somebody solves the part of the equation that shows me that ten million people in Seoul don’t die in the first 30 minutes from conventional weapons, I don’t know what you’re talking about, there’s no military solution here, they got us.”

Kuttner is a fellow traveler of Bannon’s on that score, but a liberal. The president appeared to struggle yesterday to articulate what “The Libya Model”—favored by his National Security Advisor, John Bolton—specifically entails. “I do think the logic of deterrence and MAD militates against a nuclear exchange, but as always the imponderable factor is our president's certifiable, impulsive lunacy,” Kuttner has told me.

But there are North Korea hawks, who view the Korean theater as presaging the broader confrontation with Beijing. “‘As close as lips and teeth’ is how China describes its ties to North Korea. This 1983 video shows Xi Jinping’s father, Xi Zhongxun, with Kim Jong Un’s father, Kim Jong Il. Peng Liyuan, XJP’s wife sings. Both Party and deep family ties remain,” the prominent China hawk writer Bill Gertz tweeted this week. Gertz and Bannon are friendly; Gertz reports that Thornton’s nomination might be pulled.

And Gertz was one of the first guests on Fox News star Tucker Carlson’s new “China Threat” series that is gaining buzz in the foreign policy community.

There is, of course, a third camp: restrainers who think the China threat, at least militarily, is piffle.

The key is to reframe “our ‘competition’ with China as an economic challenge, not a military one,” Edward King, president and founder of Defense Priorities, tells me. “Rather than rebuilding our own national power—focusing internally on our economic prosperity—Washington is expending resources on the wrong solutions: increased Pentagon spending and ever-growing/outdated security commitments… This doesn't help us compete with China.”

Might this group lend some cover to Thornton—at least out of concern over who the hawkish Pompeo might replace her with?