Stop Saying China Is at a Crossroads 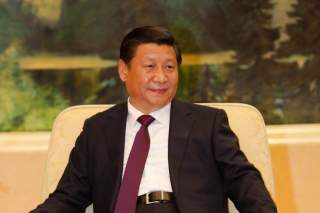 Rhetorical flourishes have a way of becoming habits of thought, shaping the way events and decisions are interpreted. Such flourishes serve a useful purpose in keeping the words fresh in our minds, but they also can limit our vision.

For the last 20 or more years, according to American pundits and policymakers, China has been at the crossroads of its future—politically, economically, and internationally. Placing China at a crossroads is a useful device, because it focuses on Beijing’s upcoming decisions and optimistically implies that China still may choose to integrate into the institutions of a U.S.-led international order. Unfortunately, the continuing usage suggests Americans have internalized China’s so-called crossroads in an unhelpful way, because the assumptions embedded within the idea of a crossroads.

The most pernicious assumption embedded within the idea of China’s crossroads is that Beijing has not made any serious policy decisions about the direction the country is moving. After 20 or 30 years of U.S. pressure on a particular issue, Chinese decisions not to do something might best be read as a genuine decision—not simply a postponement.

In then-National Security Advisor Sandy Berger’s crossroads speech “Building a New Consensus on China” in 1997, he stated “China stands at a crossroads, with conflicting forces pulling in opposite directions: inward-looking nationalism and outward-looking integration.” This perspective, even at that time, neglected the government’s role in constructing that inward-looking nationalism—a point that has become clearer over time as researchers have examined the education system and the content of contemporary Chinese nationalism. The need for such control has been reasserted repeatedly, most recently with Document No. 9 in 2013 and at the beginning of this year by Minister of Education Yuan Guiren. Contemporary Chinese nationalism in its party-led form is but one of the ways in which Beijing intends international integration to be done on its terms rather than facing the choices we suggest.

Another example of decisions made or not made include the creation of a nuclear export control system, which was promised in 1984 as part of a civil nuclear cooperation agreement, the first so-called “1-2-3 agreement” with China. Since that time, Beijing built the Ministry of State Security from a handful of offices into a nationwide network. The Ministry of Public Security spent billions of dollars and years modernizing its surveillance apparatus. And yet China claims to have had great difficulty identifying and cracking down on proliferators. At times the authorities may have made progress in curtailing some Chinese firms, but the country has still proved porous for third country transits, like those of North Korea and Iran. Also since 1984, China has gone through three formal leadership transitions (more if you count the shifts in policymaking authority under Deng Xiaoping).

Perhaps the most damaging decision Beijing has made, at least from the perspective of U.S. interests, is reneging on the intellectual property rights commitments it made as part of its accession to the World Trade Organization (WTO). Though China’s legal framework “largely satisfies its WTO commitments,” elements of China’s state-led effort to acquire foreign technology and scientific expertise are completely above board.

For example, China created a nationwide system of libraries to acquire, process, and, on demand, analyze foreign publications for their value to the research process. But state-sponsored theft of foreign proprietary technology and trade secrets is occurring on an ever-wider scale—with some knowledgeable observers suggesting billions of dollars in losses for U.S. firms. In some cases, the Chinese party-state is directly involved, as the U.S. Department of Justice demonstrated with its indictment of military officers involved in hacking American companies. In others, Beijing has incentivized Chinese abroad to seize an opportunity to steal technology and start their own business back home. Either way, these are the result of government decisions and are not, as former Deputy Secretary of State James Steinberg characterized China’s actions in cyberspace, questions of mistrust.

These decisions are reversible to varying degrees. China will live with the results of nationalist education for years to come. If the People’s Liberation Army and the other security services are as loyal as they are believed to be, then the theft of U.S. corporate data could ease substantially almost overnight.

At some point, however, Washington has to acknowledge that these decisions were made and that they do say something about Chinese intentions. Beijing is not idling at the crossroads.

One of the results is that bad ideas for U.S. interests, like Xi Jinping’s “New Type of Great Power Relations,” receive a more sustained, substantial, and serious hearing than might otherwise be the case. Despite the clearly one-sided nature of the concept, serious analysts and U.S. policymakers embraced the concept at least to the point of describing it as a useful framework for moving U.S.-China relations back onto a cooperative trajectory and avoiding rivalry. This came from the highest levels. As National Security Advisor, both Tom Donilon and Susan Rice repeated Beijing’s sloganeering and stated that a major part of U.S. China policy involved operationalizing a new type of great power relationship.

As good as a “new type” of relationship sounds as an answer to a possible U.S.-China “Thucydides’ Trap,” Beijing failed to acknowledge, much less address, any U.S. interests and the responsibility for this relationship was solely in Washington’s hands.  The reason why the United States is responsible, according to Beijing, is that China would never infringe on another state’s core interests or internal politics. This leaves no room for reasonable compromises or a path forward based on mutual respect for each other’s interests.

Another result is that U.S. proposals to impose consequences for China’s actions often are met by choruses of “what will China do in response?,” and observers predicting trade wars or Chinese retaliation in unrelated areas where Washington wants cooperation. Imposing costs is tantamount to shutting off China’s pathway to being a “responsible stakeholder” or whatever current mantra the current administration is peddling. In some of these cases, the Chinese side is one beginning an action; the U.S. side the respondent. The original choice was in Beijing, not Washington.

Nothing is wrong with having a sense of proportion or avoiding eye-for-an-eye exchanges for vanity’s sake. And there are some areas where Washington has made poor choices, such as encouraging Beijing and Moscow to move closer. However, in each of the Chinese decisions discussed above, China made its choice irrespective of agreements signed or U.S. actions. The responsibility lies with Beijing to resolve the problem. Short of U.S. capitulation on these issues, only Beijing can undo the damage.

It should not be a point of pride that the United States arguably has pursued the same policy toward China over eight administrations. The cumulative effect of changes in China and the decisions of Chinese policymakers in almost every policy area—to say nothing of East Asia as a whole—surely changed the context for U.S. policy toward China and U.S.-China relations. Some of these decisions almost certainly had a long-term impact on China’s future possibilities. Pretending that Beijing’s options remain perpetually open is to ignore what Chinese leaders have and have not done for the good and ill of their country.