Stop the Summit: Trump Should Not Meet with Kim Again 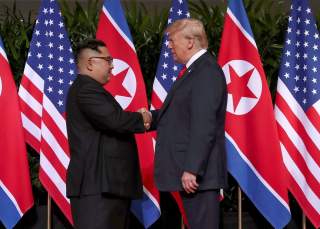 On January 18, President Donald Trump met for about ninety minutes with Kim Jong-un’s emissary, Kim Yong-chol, in Washington, D.C. At the conclusion of the session, the White House tweeted that a second summit between Trump and the North Korean leader “will take place near the end of February.”

Let’s hope the February meeting does not occur. Trump had been successful through the middle of May of last year when he was pressuring—but not talking to—the North Koreans. Kim was, uncharacteristically, making all the concessions and Trump was making none.

In the middle of May, the American president agreed to meet, and Kim quickly turned the tables on him. American policy has been unsuccessful since.

The impulsive Trump can reverse the bad streak, however. To be successful, the key is again refusing to talk.

And he took a lot of heat for raising the temperature. Yet his plan, if it can be called that, worked.

“The loud talk about ‘fire and fury,’ combined with the sight of aircraft carriers sailing towards Korean shores, have not failed to impress concerned parties, including the North and South Koreans, as well as the Chinese,” wrote leading Korea watcher Andrei Lankov of Kookmin University, in South Korea. “Towards the end of 2017, the positions of all these countries underwent rather dramatic changes—and the best or only explanation for this is simple: these countries were increasingly afraid of a war breaking out.”

And there was one more reason for Trump’s success: his so-called “maximum pressure” campaign of interdicting Kim’s revenue. “According to one U.S. government estimate,” the Wall Street Journal stated at the end of last May, “the sanctions regime has cut off half the country’s international revenue.”

Trump, who had the North Koreans where he wanted them, then suddenly changed course. As the Wall Street Journal reported, the administration decided to not sanction almost three dozen parties—some of them Russian and Chinese.

North Korea changes front companies all the time, meaning that not sanctioning new ones hollowed out the pressure campaign quickly. In short, Trump gave Kim de facto relief from the measures. Although there have been scattered designations of entities since then, they have been few in number and mostly inconsequential.

Observers had expected the administration to go after the large Chinese institutions because they had apparently continued to engage in illicit activities on behalf of the Kim regime after the June 29, 2017 designation, pursuant to Section 311 of the Patriot Act, of Bank of Dandong as a “primary money laundering concern.” The designation, which meant the small Chinese bank could no longer clear dollar transactions through the U.S. banking system, was thought at the time to be a warning to Beijing’s bigger institutions.

Trump allowed open violations of sanctions last year—and this one too—because he was trying to create a favorable atmosphere so that Kim would feel secure enough to disarm.

“I feel that Kim Jong Un wants to do something great for his people, and he has that opportunity,” Trump said at the Ottawa G-7 meeting in June, just before his historic summit in Singapore. “And he won’t have that opportunity again.” Trump called it a “one-time shot.”

Since then, Kim has not taken advantage of the opportunity. Even though there have been no nuclear detonations since September 3, 2017, and no ballistic missile launches since November 29 of that year, the North has been making progress in developing their weapons. Among other things, it has continued upgrading its aging plutonium-producing reactor at Yongbyon. Kim also has increased production of fissile material at various secret sites. Furthermore, Pyongyang has been improving a facility making parts for solid-fuel missiles. In fact, the North is operating perhaps as many as twenty “missile operating bases.”

These and other disturbing developments are indications that Kim has not made a strategic decision to abandon his nuclear and missile programs, a fundamental assumption of current Trump policy.

Trump’s core mistake is to believe that a relaxation of pressure would lead to the “complete denuclearization of the Korean peninsula,” as the June 12, 2018, Joint Statement promises. The Kim family does not reciprocate gestures of friendship; they take advantage of them.

And those American gestures have made the Kim family bold. Pyongyang, reporting from Asia tells us, had in recent days “strongly demanded” that Trump meet Kim Yong-chol.

Trump gave in to that demand even though Kim officials had refused to meet Secretary of State Mike Pompeo in November and had refused to deal at all with Stephen Biegun, Trump’s newly appointed North Korea envoy. North Korean diplomats would not even conduct working-level discussions.

The proper response to North Korean arrogance is not to agree to participate in another summit with Kim. It is to resume vigorous enforcement of sanctions against front companies and Chinese banks. The administration should also dust off the September 20, 2017 executive order cutting off ties with parties dealing with the North.

Without cash, Kim will not be able to detonate nuclear bombs, launch missiles, or engage in “gift politics,” the giving of luxury items to cement the loyalty of senior regime figures. No gift politics, no Kim regime.

Trump should let sanctions enforcement do the talking. He needs to make Kim realize he has to make a choice: keep weapons or keep power. Washington’s message to the North Korean leader must be he cannot have both.

Aboard Air Force One on May 31 of last year, Trump spoke of the possible need for multiple summits with Kim Jong Un. “There’s a very good chance that it won’t be done in one meeting or two meetings or three meetings,” the president told reporters. “But it’ll get done at some point. It may get done really nicely and really intelligently, or it may not get done intelligently. It may have to be the hard way.”

So the summit in February should not occur. The next time Trump and Kim meet, the American president should not have to plead for a declaration of nuclear and missile sites or beg for a firm timetable for denuclearization.

Trump should only meet Kim when he can congratulate the North Korean that American inspectors have verified he has surrendered every last vestige of his nuclear weapons and ballistic missile programs.