Stopping a Nuclear Nightmare: How We Can Secure Loose Nuclear Materials 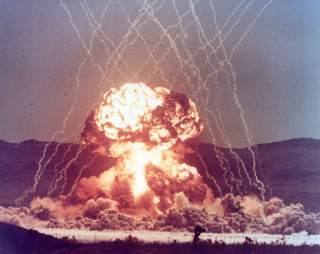 The faltering international response to the Ebola epidemic and the rise of ISIS in the Middle East starkly highlight the need for a modernized global architecture that can effectively address rapidly mutating challenges to the world order. In response to the recent cascade of global instability, President Obama acknowledged that, “to keep pace with an interconnected world . . . we cannot rely on a rule book written for a different century.” He should heed his own advice. The international forum he created to strengthen the security of vulnerable nuclear materials and facilities is heading into its endgame, still relying on twentieth-century rules that leave glaring gaps unaddressed.

The United States will host the fourth and likely final Nuclear Security Summit (NSS) in 2016, and later this month, representatives from over fifty nations will start planning the agenda. They need to overcome the prevailing complacency about the strength of the current security system and its ability to prevent a nuclear nightmare.

The current system suffers from three fundamental weaknesses. It mostly relies on voluntary obligations that nations can take or leave. There are no mandatory international standards that would allow for effective evaluation of security consistency and competency across borders. And, there is no requirement for peer review or even communication among countries about their security strategy and practices. The result is an opaque global patchwork, with the weakest links offering tempting targets for increasingly emboldened terrorists.

U.S. leadership is essential for addressing these problems. The three previous gatherings have yielded important results, in particular the accelerated removal of bomb-grade materials from a variety of countries. But many of the accomplishments plucked low-hanging fruit.

The threat is not remote. In July 2012, three peace activists, including an eighty-two-year-old nun, penetrated multiple security layers at the Oak Ridge, Tennessee nuclear facility and spray painted peace slogans on the wall of a building holding weapons-grade uranium. In 2013, a small radioactive device suitable for use as a “dirty bomb” that spews radioactive contamination was stolen from an unarmed truck at a gas station in Mexico. Since the collapse of communism, there have been 664 reported incidents involving the theft or loss of nuclear and other radioactive materials, of which sixteen involved the possession of highly enriched uranium or plutonium. Al Qaeda for years has made clear its desire to obtain a nuclear weapon.

Recognizing that the clock is running out on the high-level summit process, there are five priorities that need to be achieved at the 2016 summit.

First, the global nuclear-security regime must be comprehensive, with full implementation of all elements of the existing system and the demonstration of effective security over both civilian and military materials.

Second, nations must share nonsensitive information about security practices, standards and implementation, including the use of regular peer reviews. These are standard practices in assessing nuclear safety, but not security.

They also must demonstrate and measure the implementation of best security practices and develop common international standards and performance objectives.

Fourth, there needs to be a sustainable mechanism to replace the summits that allows for continuous progress to be made, including new security commitments and resources, and that allows the nuclear-energy industry and international expert community to continue as essential partners in the process.

Finally, the summit must offer plans for eliminating and reducing the essential ingredients of nuclear weapons—highly enriched uranium and separated plutonium.

At the United Nations General Assembly last month, Obama offered that the antidote to increasing global instability is a modernized international system and an integrated response to acute global challenges. Having made this insightful diagnosis, he now must act on it by creating an enduring legacy of aggressive action resulting in a cohesive, strong and resilient security architecture that can ensure a secure nuclear future.

Kenneth N. Luongo is the President of the Partnership for Global Security and a former senior advisor for nonproliferation policy to the U.S. Secretary of Energy. The 5 Priorities for the Nuclear Security Summit initiative can be found at http://2016nsspriorities.org