A Strauss of Cards 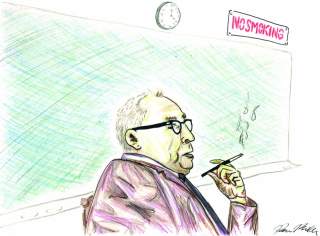 ARTHUR M. MELZER, who is a professor of political science at Michigan State University, published a well-regarded study of Rousseau in 1990 that conformed to scholarly decorum, provided abundant citations from his subject’s works and canvassed alternative interpretations. The same cannot be said of Philosophy Between the Lines, which has received numerous laudatory reviews, including one from Francis Fukuyama in the American Interest stating that Melzer has performed “a great service in directing us to a lost tradition, restoring the dignity of textual interpretation, and seeking to rescue the reputation of Leo Strauss.” In fact, he has done nothing of the kind.

Melzer’s book is as much a manifesto as a scholarly study of “reading between the lines.” He provides a full apparatus of endnotes, but many of the writers cited never said what he says they did. Promulgating something of a lifesaving message to the Gentiles about the need to return to the wisdom of the ancients, he is unbothered by inconsistencies, both large and small. After portentously warning about the practice of reading books—it can foster an “enfeebling passivity” and “excessive trust and dependence on the author”—he goes on to recommend a list of works about Thucydides. One happens to be by Leo Strauss, who is in a roundabout way the author of this work, since Melzer’s principal theses derive from his seminal Persecution and the Art of Writing, along with generous helpings from later writings of the great political philosopher. While Strauss was indeed a powerful thinker, he was not infallible when it came to textual interpretation and could sometimes take great liberties with his translations of original works.

Melzer, whose title pays homage to Strauss (the phrase “between the lines” recurs with metronomic regularity in Persecution and the Art of Writing), sets it at the heart of his defense against Strauss’s cultured despisers. They dismiss the idea of writing between the lines, or esoteric writing, as an elitist and antidemocratic practice in which access to knowledge, to the truth, is to be confined to the few who can decipher the riddling texts of their intellectual superiors. And so it was until the end of classical antiquity, writes Melzer, who professes for his own part to be anything but a fan of the practice. Rather, he depicts himself as a disinterested historian intent on reminding his auditors that around the dawn of the nineteenth century, awareness of esoteric writing faded away.

Until then, every literate person, it seems, was aware of it. So secret writing was, in fact, no secret at all? Maybe hinting that you possessed something—a tidbit that you were really reluctant to reveal—was something of a come-on, a way to elicit interest. At any rate, Melzer’s profession of dislike for esotericism seems disingenuous, for the dominant sentiment in his book is nostalgia. Indeed, he derives the need for esoteric writing not just from fear of persecution but also from human nature as such. Dislike would then be just a personal opinion, a quirk of his personality. Clearly he regards it as much more.

As it happens, my own interest in the matter is quite personal. From 1953 until I left for the University of Heidelberg in 1958, I attended Strauss’s biweekly lectures at the University of Chicago’s Harper Hall off the Midway. I date my intellectual awakening to the day I first heard Mr. Strauss, as his students always called him, put to rest the specter of historicism. His renewal of the eighteenth-century quarrel of the ancients and moderns (spoofed in Jonathan Swift’s Battle of the Books) on behalf of the ancients was spellbinding.

That Strauss should have exerted such magnetism may seem puzzling. Unassuming in demeanor, bald and wearing owlish glasses, he was a mild-mannered man who read off intricate analyses in a fairly monotone voice from a meticulously prepared text. Still, as a teacher he seemed to be a paragon of learning and he fit right in, during the presidency of Robert Maynard Hutchins, with his emphasis on the Great Books. He rarely improvised, but to great effect when he did. Certain lines remain unforgettable: “Man is that part of the whole that is open to the whole.” Or: “Plato’s ideas are really the problems.” He attracted so many gifted students that, as my contemporary Stanley Rosen later observed, “in the 1950s, there was already something like a Strauss ‘school.’”

Officially a professor of political science, he rarely touched upon the field’s concerns, and then only disparagingly. Every half hour or so, he would pause to light a cigarette and calmly puff away in front of a sign affixed to the blackboard: “Smoking Strictly Prohibited by Order of the Fire Marshal.” No marshal ever appeared to enforce the edict. The true thinker, it seemed, could safely ignore restrictions meant for lesser faculty. Nomos had to give way to physis. In antinomian mode, he spent several hours that were supposed to be devoted to Plato’s Laws to savaging a tedious new book by David Easton, a prominent member of his department who championed analyzing quantitative data to arrive at theories that could supposedly predict political behavior with scientific accuracy. The tactlessness of reproving a colleague never seemed to cross his mind. His was the Socratic conviction that you should rejoice in being refuted—what could be worse than to be ignorant and not know it? This parrhesia (Athenian for candor) left a deep impression upon all of us. Strauss’s mild, unruffled manner, then, veiled a combative streak.

Nowhere was that combativeness more conspicuous than in his war against historicism. Historicism was not the view that epochs succeed one another, and that it was imperative to study them. Rather, it meant that even the greatest philosophers and thinkers were the intellectual hostages of their own era’s conventions. Consider the dwellers in Plato’s famous image of the cave. Shackled so that they can only look ahead, they confuse the images cast on the wall before them with real beings. Only a few ascend to descry the real world, lit by the sun, not artificial fires.

The historicist denies that anyone can escape. Hegel, for instance, taught that the most profound thinkers are those that best captured the spirit of their own age, or rather of the age just past—the owl of Minerva takes flight at dusk. Hegel helped usher in das historische Jahrhundert, the century devoted to history. Timeless truths made way for such as were possible within a certain historical horizon. Plato’s ideas could be studied as a historical artifact; they were no longer live options. The Ideas had become just ideas. Implicit was the notion that progress, with the rise of Nazism and Stalinism, had suffered a pounding from which it could not recover.

ENTER STRAUSS. If a feeling of decline was in the air, he seemed to offer the hope of surmounting it. A good part of his attraction came from the hope he instilled that it was possible to combine the close study of old, neglected texts with a search for the truths embedded in them. It was now possible, under Strauss’s guidance, to rediscover the wisdom of the ancients. We read, not as antiquarians, but as philosophoi, lovers of wisdom. Strauss showed the way to a much more profound way of reading, one that liberated the greats from the shackles that the historicists had imposed upon them. Why mostly old texts? The moderns had dug a pit beneath the cave, so that one first had to reach its floor if there was to be any chance of escape. With the assistance of the classic texts, we might just succeed.

The task propounded by Strauss seemed particularly urgent because a sense of unease and peril was the dominant mood, particularly on university campuses, which were buffeted by fears of Communism and McCarthyism. The euphoria of 1945 had dissipated. In Korea, General Douglas MacArthur, in an act of stunning insubordination, had drawn the Chinese into the war and made it unwinnable. That World War II had ended with the explosions of two atomic bombs seemed to signal the moral bankruptcy of modern science (the first controlled chain reaction had taken place in Stagg Field, just a few blocks north of Harper Hall). Liberalism, still in the ascendant but showing signs of age, felt like a squishy sponge. “Life adjustment” was put forward as an ideal; David Riesman’s The Lonely Crowd analyzed the shift from “inner-directed” citizens in the mold of Thoreau to “outer-directed” consumers. Anyway, it wasn’t even clear that things in the past had ever been all that much better. America, it was said, had declined without even reaching a peak.

So Strauss’s message that scientific progress without attendant moral progress was a betrayal of the hopes of the Enlightenment fell on receptive ears. Might not the failings of contemporary America be symptomatic of the debility of democratic regimes as such? Strauss had only good things to say about the classical virtue of prudence. He prudently withheld radical criticism of what he called the American “regime,” but now and then he said that it was mistaken to believe that the flaws of democracy could be alleviated by more democracy. Presumably, that they might be by less was the implication.