Strengthening the U.S.-Indian Partnership After Ukraine 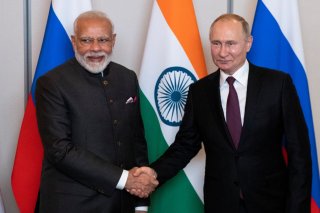 In response to Russia’s invasion of Ukraine, the United States and many of its Western and Eastern allies have slapped a plethora of sanctions on Russia and supplied Ukraine with military aid to push back Russian forces. But India, a major defense partner of the United States, has chosen a different approach, leading some observers to question the value and longevity of the U.S.-Indian strategic partnership.

While Washington and New Delhi may be treading different paths, both want to reach the same destination: peace and stability in Ukraine. Given this fact, the United States must also understand that India’s unique geopolitical and historical configuration is driving its decisionmaking. Such awareness will be key to paving the way forward for a more proactive, robust, and effective bilateral partnership.

Before getting to the way forward, it is important to first shed some light on India’s position. As the world’s largest democracy, a major Indo-Pacific power, and a key pillar of the Quad, India is aware of its enormous responsibility in maintaining security and stability throughout the international system. However, regarding the war in Ukraine, observers have criticized India for its abstention at the United Nations vote condemning Russia and its unwillingness to explicitly punish Russia through sanctions. India has made clear that there can be no justification for the lives lost and displaced, and New Delhi has consistently stated that Russia’s actions must respect the principles of sovereignty, territorial integrity, and international law. Further, while many countries that voted in favor of the UN resolutions continue to maintain balanced and even neutral positions in terms of practice, India seeks to go beyond such ambiguity by openly serving as a buffer between the warring parties and a conduit for diplomacy. Fortunately, even Ukrainian President Volodymyr Zelenskyy has been emphasizing the role of negotiations in resolving the conflict given the North Atlantic Treaty Organization’s refusal to directly intervene and establish a no-fly zone.

On the topic of sanctions, the same observers have highlighted India’s disregard for democratic values, while also pointing to New Delhi’s unwillingness to let go of its partnership with Russia. While several countries continue to supply military aid to Ukraine, India has rejected such a strategy because it will only result in more Ukrainians dying. Rather, India has chosen to engage directly with both Russia and Ukraine while emphasizing the need to cease violence and highlighting the importance of negotiations and dialogue. Interestingly, Israel—a key Western partner—has also maintained a similar perspective on the ongoing war. Moreover, Zelenskyy recently affirmed this position by stating that only negotiations between Russia and Ukraine can end this war.

In fact, by being people-centric, India’s position does not deviate from democratic values at all. Indeed, established democracies have been known to strongly deviate from such values in support of their national interest and security. India’s foreign relations have always been driven by an adherence to strategic autonomy, and New Delhi’s relations with Russia and the United States are no exception. However, India’s relations with Russia need to be understood from a historically informed lens. From the liberation of Bangladesh to the Galwan Valley incident and beyond, Russia has consistently stood by India and represented it favorably in international fora. Yet, as Russia has continued solidifying its partnership with China and improving its relations with Pakistan, India is aware of the partnership’s limitations. Regardless, both countries continue to maintain pragmatic flexibility in advancing their relations.

Geopolitically speaking, it is worth noting that India is situated in arguably the world’s most complex neighborhood. Sandwiched between two nuclear-armed strategic rivals that seek to nibble on Indian territory, while facing a myriad of threats such as terrorism, India is continuously faced with external challenges. In this context, India will need to maintain a significant military capacity to offset such threats, and Russian weapons comprise the largest chunk of India’s total arms imports.

Russia also readily provides some of the most sensitive and necessary weapons systems that India needs based on its evolving security challenges—including include nuclear submarines, aircraft carriers, tanks, guns, fighter jets, air defense systems, and missiles. Given that the United States remains reluctant to provide India with its latest and most-sensitive military technology (despite its growing exports to India), New Delhi will have to maintain this defense partnership with Moscow given the constant geopolitical dangers it faces from its immediate neighbors. Therefore, asking India to immediately drop its weapons imports from Russia will be as arduous as asking Europeans to immediately cut off their imports of Russian energy resources.

The United States and India share a vital partnership with common goals, and their relationship has come a long way since the Cold War. India has constantly figured in Washington’s policies in the Indo-Pacific, and the United States has frequently expressed its support for a more powerful India. In a similar vein, India continues to uphold the U.S. position as a stabilizing great power in the international system. Both countries also engage multilaterally with other key Indo-Pacific players such as Japan and Australia. However, the U.S.-India partnership continues to be marred with gaps that need to be ironed out to maximize its potential.

India has supported U.S. interests even if it sometimes comes at the expense of its own. India’s decision to cut off imports of Iranian oil, immediately lift its export ban on hydroxychloroquine during the peak of the Covid-19 pandemic (while bearing Washington’s threats), and increase oil imports from the United States amid criticisms over Russian oil imports are few of the many instances when India pursued policies that favored Washington. However, on several occasions, the United States lacked the ability to compromise and maintain flexibility with India.

Washington’s past and present support for Pakistan, despite the latter’s blatant disregard for international law, continues to be a thorny issue. Moreover, the lack of a formidable response against China’s aggression towards India’s security and territorial integrity serves as another major concern for India. Furthermore, the delays in health assistance and the looming threat of Countering America’s Adversaries Through Sanctions Act (CAATSA) sanctions add to the strains in the bilateral relationship. Such areas need to be addressed to pave a more flexible path for both countries to effectively collaborate on a variety of issues.

While India may not be a treaty ally of the United States, it still serves as a crucial partner in ensuring the stability of the Indo-Pacific amid the growing threats posed by a powerful and assertive China with global ambitions. By enhancing cooperation, particularly in defense, India will be in a better position to engage without a significant level of dependency. Additionally, as several key Asian, African, and Latin American countries are growing ambivalent towards the West, the need to secure and maximize the U.S.-India partnership is crucial. However, a significant level of proactivity, flexibility, and pragmatism is needed amid the evolving shifts taking place in the international political landscape.

Don McLain Gill is a resident fellow at the Manila-based International Development and Security Cooperation (IDSC). He is a geopolitical analyst and author who has written extensively on Indo-Pacific security.