The Stubborn Persistence of the Russia Bogeyman 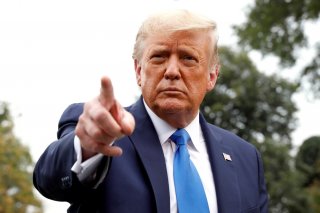 Is Donald Trump secretly a Russian agent? Considering the number of books and articles resurrecting this old question in the past few weeks, one might be forgiven for wondering whether some mad scientist has found a formula for resetting the nation’s collective memory to 2016, a time before vast numbers of independent Mueller investigators, bipartisan congressional committees, and highly motivated media muckrakers devoted themselves to probing ties between Trump and Russia. Mueller’s bottom line that investigators “did not establish that members of the Trump Campaign conspired or coordinated with the Russian government in its election interference activities” was widely accepted.

Or was it? Tim Weiner, a former New York Times reporter, argues that the investigators simply dodged the question of whether Trump is a Russian agent, focusing on the narrower issue of election-related collusion. As a result, he contends, “we still don’t know why the president kowtows to Vladimir Putin, broadcasts Russian disinformation, bends foreign policy to suit the Kremlin and brushes off reports of Russians bounty-hunting American soldiers. We still don’t know whether Putin has something on him.” The notion that anyone might reasonably believe that America’s post-Cold War approach to Russia and other parts of the world has failed and requires rethinking, or that a US president might have cause to question the Intelligence Community’s judgments or political leanings, appears not to have occurred to him.

That notion also seems to have evaded Andrew Weissman and Peter Strzok, of Mueller and FBI investigation fame. Each is hawking his own book explaining why they were correct from the start to suspect Trump of treason. But neither reveals any heretofore undiscovered evidence for this suspicion. Rather, like Weiner, they regard Trump’s refusal to pay homage to conventional American views of the Russian threat as grounds for questioning his loyalty. Strzok asserts that Trump “is unable to put the interests of our nation first, that he acts from hidden motives, because there is leverage over him, held specifically by the Russians but potentially others as well.” Like Weiner, they suggest not so subtly that if investigators manage to get access to Trump’s financial records, we might unravel the otherwise inexplicable mystery of his unorthodox views of Russia.

Then there is Alexander Vindman, the former National Security Council staffer last seen in House impeachment hearings accusing the president of exploiting foreign policy to advance his domestic political agenda, to the unabashed applause of anti-Trump media figures doing much the same thing. Trump, he says, is not necessarily being blackmailed by the Kremlin, but he nonetheless is advancing Russia’s malign ambitions, perhaps simply because he admires Putin. Why then did Vindman agree to work on Trump’s NSC staff? “I thought I could potentially communicate with him, maybe speak to his better angels, explain to him that his ideas about Russia were harmful to the United States.”

Whether such resurrected accusations will wind up empowering the better angels of our nation’s electoral politics remains to be seen. But they certainly undermine our ability to deal with the vexing issue of Russian electoral interference, stoking Trump’s suspicions that reports of Russian meddling are little more than politically-barbed attacks on his legitimacy. The net effect is to discourage him from taking action, to poison his already toxic relations with the Intelligence Community, and elicit what-aboutist retorts regarding China’s alleged support for Biden. Lost amid the rancor is any sense of proportion and nuance about electoral interference and its possible motivations, any ability to differentiate among low-impact social media trolling, high-end alteration of vote tallies, and variations of interference in between.

The effect on our broader dealings with Russia is equally clear: to create a political environment in which the only possible way to handle the complex challenges posed by Russia is an ever-hardening confrontational approach toward the Kremlin, regardless of real world results. For Trump, the best means of countering accusations that he is working on Russia’s behalf is to adopt a set of sanctions and tough-guy military measures that are more onerous than any the United States has imposed since recognizing the Soviet government in 1933. For Democrats, the political logic produces calls for even more toughening of this already toughened line. Pro-détente factions that once had a home in both the Democratic and Republican parties during the Cold War have disappeared almost entirely.

Meanwhile, the safe space in our public discourse for dissenting from American orthodoxy on Russia has grown microscopically thin. When the US government will open a counterintelligence investigation on the presidential nominee of a major American political party because he advocates a rethink of our approach to Russia, only to be cheered on by American media powerhouses that once valued civil liberties, who among us is safe from such a fate? What are the chances that ambitious early- or mid-career professionals inside or outside the US government will critically examine the premises of our Russia policies, knowing that it might invite investigations and professional excommunication?

The answer is obvious. And unless that changes, the prospects for success in our dealings with Russia and the difficult set of challenges it presents will be just as slight.

George Beebe is the Vice President and Director of Studies at the Center for the National Interest, former head of Russia analysis at the Central Intelligence Agency, and author of The Russia Trap: How Our Shadow War with Russia Could Spiral in Nuclear Catastrophe.