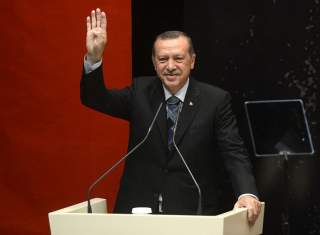 A row erupted within Turkey’s ruling Justice and Development Party (AKP) on March 21, after the deputy prime minister brazenly condemned President Recep Tayyip Erdoğan for stepping outside his boundaries by criticizing the government’s Kurdish peace process. Deputy Prime Minister and AKP co-founder Bulent Arinc quickly shot back, reminding Erdoğan that “it is the government that rules the country, and this is the responsibility of the government.” In response, the AKP mayor of Ankara called for Arinc’s resignation, while Erdoğan admonished the deputy premier for forgetting that he is Turkey’s president, not merely a “showroom model.”

Erdoğan is Turkey’s first publicly elected president. Under the current parliamentary system, the presidency is a largely symbolic institution, but Erdoğan is agitating for a more active role. His ultimate goal is to alter the constitution and transform the country’s political system into a presidential one, but to do so without negotiating with the opposition, he needs the AKP to win a two-thirds majority in the upcoming June elections.

Until such a transformation occurs, however, Erdoğan’s powers as president are legally restricted. Upon leaving the Prime Minister’s Office after thirteen years last August, pursuant to Turkish law, he was forced to resign from the AKP, and transferred both executive authority and the party’s leadership to the new prime minister, Ahmet Davutoglu. Since then, however, Erdoğan has repeatedly violated parliamentary protocol and interfered in the AKP’s internal affairs.

The opposition has long complained about Erdoğan’s meddling, but March 21 was the first time that criticism came from a senior government official within the AKP. Turkish journalist Yavuz Baydar playfully called Arinc’s reaction his “one-minute” moment against Erdoğan—a reference to an infamous moment at the 2009 World Economic Forum in Davos when Erdoğan lashed out at moderator David Ignatius for interrupting his speech, repeating the phrase, “One minute!”

Arinc is not the only AKP official displeased with Erdoğan’s attempts to exert political control. Indeed, the president’s efforts to consolidate power have even undermined the role of Davutoglu—a longtime ally and deputy to Erdoğan—as head of the party and the government.

For example, in January, Erdoğan decided to chair a cabinet meeting in Davutoglu’s place. Later that month, Turkey’s parliament voted on whether to try four ex-ministers in the Supreme Court on corruption allegations. Davutoglu was in favor, but Erdoğan met with AKP members to lobby against the measure. In the end, most AKP members voted Erdoğan’s way, with a disgruntled Davutoglu skipping the vote entirely. Then, in February, Erdoğan persuaded the party to postpone an Erdoğan initiative to increase government transparency until after the June elections. Earlier this month, Erdoğan chaired his second cabinet meeting.

Moreover, Erdoğan has kept just as busy as a party leader in the pre-election period, lobbying for the AKP despite a constitutional obligation to uphold political impartiality. The president has not only appeared to exert control over Davutoglu’s list of AKP electoral candidates, he also allegedly admitted to having reviewed the party’s election manifesto (though he later denied it).

The most telling example, however, of Erdoğan’s intrusion into politics involves Hakan Fidan, head of the National Intelligence Organization (also known by its Turkish acronym MIT). After serving during Erdoğan’s term as prime minister, Fidan resigned from the agency in February and joined the AKP to run in the upcoming elections.

Davutoglu, who in his capacity as prime minister supervises the MIT, supported Fidan’s decision and welcomed him into the AKP. Erdoğan, on the other hand, publicly opposed the move. Speaking to reporters in February, he thundered against the departure of his “secret-keeper,” asserting that “the MIT is not an ordinary institution...We cannot simply appoint an ordinary person to it.” Analysts speculated that if elected to parliament, Fidan could have helped Davutoglu counterbalance the president. Ultimately, Fidan relented to Erdoğan, and announced his return to the spy agency after only a month.

Both Arinc and Davutoglu have tried to downplay their feud with Erdoğan. Arinc backtracked from his initial response by acknowledging that the government should better inform the president on major decisions—something Erdoğan has repeatedly stressed. And, on March 28, Davutoglu denied rumors that he does not support a switch to a presidential system. “The presidential system will be in our party’s election manifesto. I have written it myself,” he said in a television interview.

Davutoglu was savvy enough to avoid explaining how this future system would operate. Would it be the all-powerful presidency that Erdoğan appears to have in mind, or would it resemble an American-style presidency, with institutional checks and balances?

Despite the legal mandate that the president be a ceremonial position, Erdoğan remains the most powerful man in Turkey. But his encroachment on politics has not only damaged the constitution. It has also damaged his relationship with longtime partners, and revealed increasing resentment among the ranks of the AKP’s leadership. Even pro-regime media have commented that the recent public infighting is unprecedented in the AKP’s history, and warned that without projecting an image of stability, the party would lose its appeal.

Erdoğan hopes that the June elections will enable him to reform the constitution to instate a presidential system. But even if the AKP wins the necessary majority of parliamentary seats, there is no longer a guarantee that the party will unanimously vote in favor. “Everest is the highest spot on Earth,” a top AKP advisor told CNN Turk on Friday, “but owes its existence and stance to the Himalayas. Erdoğan’s stance within the party is like Everest, but he is standing on the Himalayas.”

Caught between his power fantasies and the legal limitations of his post, Erdoğan appears to be losing the very allies who stood behind him all these years.

Merve Tahiroglu is a research associate at the Foundation for Defense of Democracies, focusing on Turkey. @MerveTahiroglu