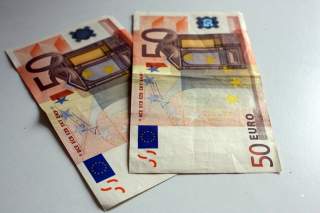 For months now, Mario Draghi, head of the European Central Bank (ECB), has been trying to get a consensus for “quantitative easing” (QE) program whereby he would buy 1.1 trillion euros ($1.3 trillion) of debt issued by EU nations, supposedly to counter the threat of a deflationary spiral. Recently, Draghi launched a version of QE modeled after the five-year effort just ended by the Federal Reserve, but without the support or participation of the most important nation in Europe—namely, Germany.

So what’s going on here? First, some context. Since the 2008 financial crisis, the leaders of the EU have been running away from the core problems in Europe—a lack of real economic growth, mountains of bad debts and obligations accumulated by nations that cannot live within their means. As I note in an upcoming essay for TNI, nobody—in either the United States, or the EU or China—wants to admit that the real annual increase in jobs and wealth in most economies is basically the rate of population growth. That is, 1-2 percent per year. Only by expanding credit and borrowing against the future can we boost today’s nominal rate of growth, but the end result is a financial bust a la 2008 and a lot of debt nobody wants to repay.

In order to make the bad debt go away, central bankers have resorted to low or even negative interest rates, a radical departure from orthodox economics that taxes savers to benefit debtors. In Germany and Switzerland, for example, interest rates on government debt are already negative, meaning that governments are confiscating money from bond investors. Sounds great, yes? But the only problem is that all of these QE programs by the Fed and ECB, and also the Bank of Japan, do not really address the core problems facing the industrial nations—too little growth measured in jobs and consumer income, and too much debt.

Interest rates have been ultra-low in the EU nations for years, but the value of the euro almost magically remained strong—at least until the vast flows of dollars created by the Fed overwhelmed Europe’s defenses. Going back to 2011, economically strong nations outside the Eurozone such as Switzerland and Denmark were purchasing euros and supplying whatever amount of Swiss francs and Danish kroner that the market wanted to buy at a fixed price. And who was buying the francs and kroner? Hedge funds and other financial institutions that wanted to acquire assets in Switzerland and Denmark.

The Swiss and Danes had been supporting the euro by fixing both their exchange and interest rates, a recipe for disaster for two relatively small economies. But a week ago, the Swiss National Bank finally broke the peg and overnight allowed its currency to appreciate about 30 percent against the euro. We described some of the losses caused by the sudden revaluation of the CHF in a research report published by Kroll Bond Ratings. A week after the support network for the euro collapsed, the ECB announced a new program to purchase $1.3 trillion worth of EU debt. Could this be a coincidence? Probably not.

Ultimately, the ECB bond purchase program is a desperate effort to stave off the day of economic reckoning in Europe via inflation and currency devaluation. Last spring, we should recall, the U.S. Federal Reserve and the ECB agreed on a joint strategy to lower the value of the euro. This is an effort to stimulate growth in the moribund nations of Europe. The euro is now headed toward parity with the dollar. In effect, the U.S. central bank unilaterally decided to end the currency war with Europe, at least temporarily. But the reality is that a lower euro will eventually do substantial damage to the profits and earnings of major American companies, forcing a reaction in Washington. Currency wars, after all, are a zero-sum game.

Even if the ECB purchases $1.3 trillion worth of EU debt from nations other than Germany, the question of low growth and excessive debt will remain unresolved. The policy paralysis in the EU is visible both in terms of a refusal to address issues of excessive debt and an overreliance upon monetary policy. Many over-indebted governments in the industrialized nations and particularly in the Eurozone seem to have decided that the best way to reduce debt-to-GDP ratios is to confiscate assets from investors via negative interest rates. But the fact remains that many EU governments and financial institutions are saddled with growing debts that need to be restructured if true economic growth is going to be restored.

It is easy to be critical of the reluctance shown by EU policy makers when it comes to debt restructuring, but it needs to be remembered that the United States is the great engine of financial instability in the global financial markets. American policy makers have shown little courage in dealing with the question of zombie banks and the mounting indebtedness of the United States, in part because doing so usually equates with political suicide. Who remembers, for example, that most of the members of the Senate Banking Committee who voted for the Financial Institutions Reform, Recovery, and Enforcement Act of 1989 (FIRREA) lost their seats in the subsequent election? Thus, Washington, like the EU, prints money and accumulates ever more debt, effecting a vast transfer of wealth from savers to debtors.

"Madmen in authority, who hear voices in the air,” John Maynard Keynes wrote at the end of the General Theory, “are distilling their frenzy from some academic scribbler of a few years back.” Much of what passes for serious thinking inside the Fed and ECB is in fact desperate speculation with little basis in history or empirical economic data. The idea that having central banks buy government debt in order to drive interest rates to zero and beyond represents good policy choices is the end result of decades of neo-Keynesian socialism practiced by the economists who dominate the ranks of the major central banks. But the crisis with respect to the Swiss franc and the euro is really a dress rehearsal for a much larger crisis centered on the dollar.

The magnitude of the potential risks created by the Fed’s manipulation of the dollar and the financial markets is enormous. For example, there is estimated to be between $5 and $7 trillion in carry trade positions funded with borrowed dollars, where foreign investors have borrowed the U.S. currency to fund purchases of local currency debt. The Fed views such cross-border “risk taking” as a sign of the success of radical, unorthodox policies such as QE and zero interest rates. A contrary view is that the Fed, as it did in 2001, is creating the circumstances for the next financial calamity. Just imagine the paper losses on short dollar positions caused over the past month as the dollar has appreciated versus other global currencies.

At best, the policies followed by the Fed and ECB are avoiding the twin issues of debt and low growth that are at the heart of the crisis confronting all of the industrial nations. At worst, such policies are making things far worse and creating the circumstances for the next major financial catastrophe. In 1844, when there were no central banks manipulating the financial markets, Walter Bagehot wrote in his classic book Lombard Street: “If the dominant banks manage ill, the rate of interest will at one time be excessively high, and at another time excessively low: there will first be a pernicious excitement, and next a fatal collapse.” In that sense, at least, nothing has changed.