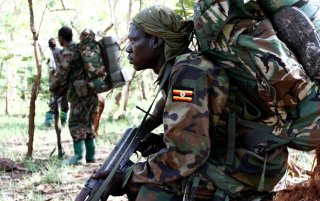 Foreign Policy is a general objective that guides the activities and relationships of one state in its interactions with other states. Boko Haram in Nigeria and the Lord Resistance Army (LRA) in Uganda constitute a serious threat to African and international peace, security, and development as well. Both LRA and Boko Haram emerged from the northern part of Uganda and Nigeria, exploiting the region’s lack of education, mass poverty and unemployment, lack of economic opportunities for youths, and absence of fundamental basic needs. Africa represents a strategic continent for major countries such as the United States, China, Russia, France, and the United Kingdom. The United States provides strategic and financial support to Nigeria and Uganda to neutralize and defeat non-states armed groups in Africa.

The Lord Resistance Army is the deadliest non-state group in Uganda. Founded in 1987 by Joseph Kony, the LRA operates in Uganda and neighboring countries such as the Central African Republic (CAR), the Democratic Republic of the Congo (DRC), South Sudan, and Sudan. According to Ugandan officials in 2007, the LRA had only 500 to 1,000 soldiers, but other sources estimated that there could have been 3,000 soldiers, with approximately 1,500 women and children. By 2011, unofficial estimates ranged from 300 to 400 combatants, with more than half believed to be abductees. Since the LRA first started fighting in the 1990s they may have forced well over 10,000 boys and girls into combat, often killing family, neighbors, and schoolteachers in the process. The LRA has frequently used children to fight because they are easy to replace by raiding schools or villages. According to Sophie Neiman from the Congressional Research Service, the LRA has killed more than 100,000 people and conscripted tens of thousands of children.

Mohammed Yusuf founded Boko Haram in 2002 and led the group until 2009. After Yusuf’s death, Abubakar Shekau took over until he died in 2021. Boko Haram’s actions are brutal and widespread and drew international attention in April 2014 after the abduction of 276 schoolchildren. Boko Haram has killed more than 15,000 people, including more than 6,500 in 2015 alone. As the deadliest group in West Africa, Boko Haram is responsible for the deaths of more than 300,000 children and has displaced over 2.3 million from their homes. Boko Haram has also contributed to regional food crises and famines, which afflict more than 9.2 million, according to the United Nations.

In August 2011, a Boko Haram suicide bomber attacked a foreign target—the UN building in Abuja, Nigeria’s political capital—for the first time. This attack on the UN is a response to Nigeria's harsh security response against Boko Haram members. It is also a warning message to the United States and the international coalition fighting against the group. What concerned the U.S. Department of State is the allegiances of Boko Haram to other international terrorist groups, particularly the Islamic State (ISIS), to which the group pledged allegiance in 2015.

In 2015, Africa established a coalition force to fight Boko Haram. With the support of the African Union and the United States, the coalition has marshaled more than 8,000 troops from Benin, Chad, Cameroon, Niger, and Nigeria to combat Boko Haram’s insurgency. In September 2021, Brigadier General Bernard Onyeuko of the Nigerian Armed Forces announced the surrender of close to 6,000 Boko Haram insurgents, and the killing of their leader, Aboubakar Shekau.

The national, regional, and international response against Boko Haram in Nigeria and the LRA in Uganda has improved the security threats in these countries and Africa. According to Martin Griffiths, head of the UN office for the coordination of humanitarian affairs, the situation is still “very, very dangerous (and) very threatening.”

The LRA has yet to decline in number and the group is still active not only in Uganda, but also in the Democratic Republic of Congo, Central African Republic, South Sudan, and Sudan. In 2021, as reported by France 24, the group conducted forty-two attacks in the past year, killing thirty-one, and abducting 192 the remote border areas between the DRC, CAR, and South Sudan. Kony’s whereabouts are unknown.

The Biden administration should officially reiterate its support for free, fair, and credible elections, promote democracy, and maintain modest funding for supporting elections by encouraging efforts by the International Republic Institute, the National Democratic Institute, and other nongovernmental organizations to monitor the election campaigns, polling, vote counting, and election's aftermath.

The Biden administration should also urge the Nigerian and Ugandan governments to promote and encourage peace and democracy in their respective countries. American officials should identify governors who provide a model of good governance and publicize their efforts. The U.S. Agency for International Development (USAID) should continue its strategy of working exclusively with state governments with a good record of accomplishment.

Additionally, the United States should expand the Fulbright Program and Humphrey Fellowship Programs and other exchange programs with Nigeria and Uganda to highlight and strengthen their commitment to democracy and to building Nigeria and Uganda's strong civil society's leadership capacity. It is also important to facilitate travel between northern Nigerian and Ugandan citizens and the United States. This will encourage these countries to prioritize education as most Africans dream of traveling to the United States.

The Biden administration should direct the U.S. Agency for International Development and other relevant U.S. agencies to explore what technical assistance the United States could provide to national, regional, and international agencies and institutions working in humanitarian and security sectors to address the immediate needs and challenges that may threaten peace and security processes in Africa. USAID should encourage and facilitate coordination of their efforts by providing occasions and venues for their leadership to meet.

The United States must also act in support of strengthening local- and state-level conflict prevention and community security mechanisms to help communities prevent and solve emerging conflicts and tensions in Borno and Kaduna (in Nigeria), and the Gulu region (in Uganda); rehabilitating civilian infrastructure and basic services to strengthen government legitimacy and responsiveness to citizen needs; and supporting the reintegration of former fighters, civilian militia, and those associated with insurgent groups, as well as local-level social cohesion more broadly, with a long-term view toward social healing and reconciliation.

Establishment of a U.S. Consulate in Kano (northern Nigeria)

Kano State (Jihar Kano in Hausa) is one of Nigeria’s thirty-six states and is located in the northern region of the country. A Muslim-majority state, Kano State is one of the twelve states in Nigeria to operate under Sharia law within the legal framework of the Nigerian Constitution. According to the Council on Foreign Relations, the United States needs a diplomatic presence in the north to understand and shape developments in that volatile region, particularly as the 2023 elections approach. A consulate has also become an important instrument of American outreach to Nigeria's Muslim population Implementation of these recommendations is necessary for the credibility of U.S. advocacy for human rights, democracy, peace, and security in Africa.

Both Nigerian and Ugandan leaders should focus on the moral responsibilities of security forces to protect their citizens at all costs. It is important to initiate and strengthen cooperation and collaboration between the civilian and military-police forces which remain vital to these forces’ successful missions. It is also important to provide African security forces with reasonable salaries, which could better motivate them and reduce corruption. The Nigerian and Ugandan governments should provide modern, appropriate, and accurate military equipment to security forces to eradicate Boko Haram and LRA.

Finally, supporting northern regions in Nigeria and Uganda can prevent the future emergence of terrorist groups and make it more difficult for these groups to recruit new members. Indeed, Boko Haram and LRA easily recruit illiterate and poor young men. The United States should provide financial and political support for these efforts.

Dr. Dramane Chabi Bouko is a lecturer in international relations, peace, security, and geopolitical studies with a specific focus on Africa and China at the University of Parakou, Benin, and a Humphrey Fellow at the Maxwell School at Syracuse University.