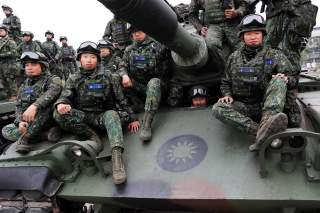 This year marks the fortieth anniversary of the Taiwan Relations Act (TRA), one of the most important components of U.S. policy toward Taiwan. In addition to President Ronald Reagan’s 1982 Six Assurances, the TRA forms the cornerstone of the U.S.-Taiwan relationship, providing unequivocal guidance for relations between both allies. Moreover, Taiwan is a U.S. ally whose progress has been an inspiration to all those still suffering under repressive governments. Taiwan’s vibrant democracy, open society, and free market are examples to the world of what can be achieved when innovation and human rights are allowed to flourish.

For forty years, the TRA has provided a vehicle for peace in the Pacific and a means of maintaining a direct relationship between Washington with the more than twenty-three million Taiwanese people who are one of America’s most important allies and trading partners. This legislation provides an institutional framework and legal basis for continued U.S. relations with Taiwan after the end of formal diplomatic ties.

Taiwan was—and continues to be—one of America’s most reliable allies. Furthermore, Taiwan now ranks as one of America’s leading trade partners. However, there are several areas where the United States should seek to strengthen ties with Taiwan and to bring into reality the legislative intent of the Taiwan Relations Act.

Chinese president Xi Jinping has said that he would not renounce the use of force to achieve unification with Taiwan and China has been building military outposts in the South China Sea. In light of the Chinese threat against Taiwan, the United States needs to stand up for what the TRA says and make it very clear that its relationship with Taiwan is an important one.

1. Given the increasing threat that China poses to Taiwan and to regional stability, it is in the interest of the United States to strengthen Taiwan’s defense capabilities against China. The best way to defend the democratic island from an unprovoked attack is for Washington to provide it with next-generation jet fighters. Washington must allow Taiwan to at least to ensure that it can defend itself and prevent its self-defense capabilities from ever eroding.

2. Washington should continue to remind both sides of the Strait that it opposes the use of force to settle the Taiwan issue, that a resolution of the Taiwan issue is a matter for the two sides to decide themselves, and that the United States does not support independence for Taiwan.

3. A free-trade agreement would demonstrate American solidarity with Taiwan at a time when China is intensifying its efforts to deny the small island nation international representation and diplomatic ties with other countries. This means making progress on the Trade and Investment Framework Agreement (TIFA) process—a deal would help promote U.S. prosperity and economic security.

4. Taiwan is still unable to fully participate in most international organizations, despite this being a primary intent of Section 4(d) of the TRA. Taiwan has the right and responsibility as a member of the global community to participate in and contribute to international organizations. Taiwan’s inclusion is important not only for the twenty-three million people on the island, and the United States must continue efforts to overcome Taiwan’s exclusion.

5. Taiwan is a good friend and partner of the United States, and Taipei has been providing assistance to Washington in dealing with a wide range of matters on the global stage. A move by America to continue its commitment to Taiwan is critical to the security of Washington, since the two sides have established close ties through their attitudes toward democracy and human rights. U.S.-Taiwan ties are also vital to peace in the Asia-Pacific region.

6. Because of its proximity to—and rapprochement with—China, Taiwan has carved out a unique role player in the Asian Pacific as the stakes grow in the simmering tensions between Washington and Beijing. Washington must work with Taipei together toward a trilateral win-win relationship. Rather than fearing possible damage to bilateral ties with China, Washington must work closely with Taipei and take advantage of the benefits this important partnership can offer.

In sum, the United States has an abiding interest in peace and stability across the Taiwan Strait. Toward that end, the United States must support and encourage improvements in cross-Strait relations, albeit at a pace acceptable to the people on both sides. Strong United States support for Taiwan autonomy also helps give twenty-three million people in Taiwan the confidence to strengthen their cross-Strait relations. America’s commitment to Taiwan’s safety and security is a hallmark of the TRA.

Finally, Taiwan’s economic achievements over the last decades have proven the merits of the TRA. Taiwan has aspired for greater integration into regional economic and trade mechanisms. Looking forward, as America and Taiwan commemorate the fortieth anniversary of the TRA, it is hoped that the United States will continue to support Taiwan’s democracy, freedom, and economic prosperity, and continue to maintain a strong relationship with Taiwan. Taipei deserves Washington’s support in fulfilling the intent of the congressional drafters of the Taiwan Relations Act.

Kent Wang is a research fellow at the Institute for Taiwan-America Studies. He writes on Asia-Pacific security and strategic affairs with a special focus on the Taiwan issue in the U.S.-Taiwan-China trilateral equations, as well as other topics on East Asian international politics and regional security.