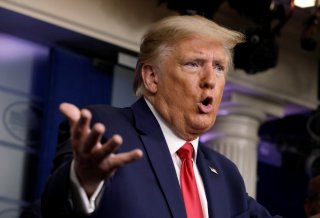 President Donald Trump is right. “WE CANNOT LET THE CURE BE WORSE THAN THE PROBLEM ITSELF,” he tweeted today. “AT THE END OF THE 15 DAY PERIOD, WE WILL MAKE A DECISION AS TO WHICH WAY WE HAVE TO GO!” But which way will we have to go?

Trump would clearly like to go back to business as usual, but America’s economic and healthcare coronavirus plight in the next fifteen days could become even more dire. Indeed, Surgeon General Jerome Adams contradicted Trump, announcing, “This week, it’s going to get bad.” He added, “We really, really need everyone to stay at home.” With over 30,000 confirmed cases, it could get even worse in coming weeks as hospitals are overwhelmed with new coronavirus cases. Eventually, a herd immunity effect could develop but the immediate approach must be to develop a surge capacity in hospitals and to promote widespread testing.

Even as the White House continues to emit a fog of uncertainty and Congress bickers about the $1.8 trillion stimulus bill, the one institution that appears to be functioning is the Federal Reserve. It’s déjà vu all over again for the Fed. Quantitative easing and then some has returned. A massive injection of funds is supposed to ensure that, as in 2008, the economy doesn’t end up in a new Great, or even Greater, Depression. Fed chairman Jay Powell, whom Trump has repeatedly maligned as an incompetent nincompoop, is acting expeditiously and shrewdly.

As Powell recognizes, the stakes could hardly be higher. On Sunday, St. Louis Federal Reserve President James Bullard stated that unemployment could reach 30 percent. Today the Fed announced unlimited bond purchases, an audacious move that will prevent a total economic collapse. The Fed also stated that it will purchase corporate bonds and institute a Main Street Business Lending Program. Wall Street was unimpressed; the Dow fell about 300 points.

The big question-mark is Congress. True to form, Democrats and Republicans are deadlocking over the massive stimulus bill. Will the stimulus stimulate? Democrats are bashing the $500 billion “Exchange Stabilization Fund,” alleging that it is merely a corporate “slush fund” that would allow Treasury Secretary Steve Mnuchin to secretly dole out billions whenever and wherever he pleases, including to Trump’s own properties (one story that is sure to get more attention in coming weeks is the financial pressure on Trump’s own businesses as well as the $300 million loan that he owes to Deutsche Bank). “This isn’t corporate welfare,” Mnuchin declared on Fox, but on Sunday evening the Senate Democrats stymied the GOP bill.

The tables are turned. Democrats are in the same position that Republicans were in when they resisted bailouts during the 2008-2010 economic crash and ended up embracing the Tea Party. They have little to lose by playing the populist card and drubbing Trump and the GOP for championing corporate cronyism, including a $58 billion bailout of the widely despised airline industry. “We’re not here to create a slush fund for Donald Trump and his family, or a slush fund for the Treasury Department to able to hand out to their friends,” said Senator Elizabeth Warren (D-MA). “We’re here to help workers, we’re here to help hospitals.” They’re also pointing out that the proposal for the fund doesn’t contain any of the multiple controls, including a Financial Stability Oversight Board and a Congressional Oversight Panel, that helped to regulate the 2008 Troubled Asset Relief Program.

If Senate Majority leader Mitch McConnell doesn’t make some concessions, House Speaker Nancy Pelosi will move her own bill forward and financial markets will crash further. The two sides must reach a compromise quickly—or else disaster looms. Meanwhile, Trump continues to tweet copiously. This morning he declared, “STRONG & UNITED, WE WILL PREVAIL! GOD BLESS THE USA!!”