Susan Rice: American Leadership in the Asia-Pacific Must Continue 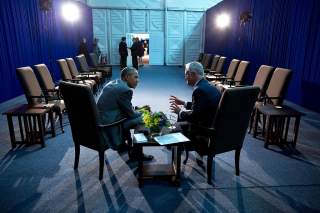 Seven years ago, President Obama joined the leaders of 20 other economies for the APEC summit in Singapore—his first trip to Asia as president. When President Obama took office, the global economy was still reeling from the worst financial crisis since the Great Depression. The United States was consumed with two major, costly ground wars in Iraq and Afghanistan, but not nearly as engaged in the world’s fastest growing region, the Asia-Pacific.

Next week, in Peru, APEC leaders will gather to discuss once again the future of this rising region. It will be President Obama’s last foreign summit. And, thanks to President Obama’s renewed and sustained focus on the Asia-Pacific from the beginning of his presidency, it comes as the United States is more deeply engaged across the region than we have been in decades.

Why does that matter? The United States is a Pacific power, underwriting regional stability for more than 70 years. The Asia-Pacific accounts for 40 percent of global economic growth, four of our top ten trading partners, and five of our treaty allies. As the President has said, “The fortunes of America and the Asia-Pacific have become more closely linked than ever before.”

That’s why President Obama has worked to rebalance our foreign policy so that the United States is playing a larger and long-term role in the Asia-Pacific. We’ve strengthened cooperation with treaty allies like Japan, South Korea, and Australia, while forging deeper partnerships with emerging economies and powers, from India and Indonesia to Vietnam and Malaysia. We’ve intensified U.S. engagement in Southeast Asia and enhanced our support for regional institutions, including ASEAN. We’ve stepped up trade and investment, and concluded the Trans-Pacific Partnership agreement—a landmark 12-nation agreement that would set the rules of trade for nearly 40 percent of the global economy. We’ve stood strongly for the rights and dignity of the people of the Pacific, including encouraging democratic reform in Myanmar.  We’ve managed our complex but increasingly durable and productive relationship with China. And, in Sunnylands, California, earlier this year, President Obama and his ten Southeast Asian counterparts reaffirmed our shared vision for the future of this dynamic region—a rules-based, peaceful, and prosperous Asia-Pacific.

The results are clear. Since 2009, American exports to the Asia Pacific have grown 50 percent, supporting over 700,000 jobs in the United States. By the end of this decade, a majority of our Navy and Air Force fleets will be based out of the Pacific.  Our young leaders’ initiatives are helping over 100,000 young people unleash their potential. China and other Asia-Pacific countries played a vital role in reaching the historic Paris agreement to combat climate change. President Obama also became the first U.S. president to visit Myanmar and Laos, and made a landmark visit to Vietnam, as those countries continue to open up to the world.

Unmatched American leadership has laid a strong foundation for regional peace and prosperity in the region. But, in a dangerous and uncertain world, we cannot relinquish that leadership. Competing claims have raised tensions in the South China Sea, while North Korea continues its reckless provocations. The threat of violent extremism remains real. To advance our values and interests in this region in the coming years, it is critical that we continue our active engagement.

First, the United States must maintain our robust economic engagement and strengthen ties in this strategically important region. Trade that reflects American values benefits American businesses and workers by ensuring that they can compete on a level playing field. That’s why President Obama has fought to set rules of the road for trade that ensure fair competition, protect the environment, and raise labor standards through TPP.  If we don’t define these rules of the road, others will—not only on trade, but on cybersecurity, nonproliferation, and the role of civil society. Indeed, China is already pursuing its own regional trade agreement, with lower standards and fewer protections. As Singaporean Prime Minister Lee Hsien Loong has observed, continued U.S. economic engagement in the Asia-Pacific is a “litmus test” of American credibility in the region. The United States can and must meet that test.

Second, the United States will need to uphold the rules-based order that is essential to the stability and security of the Asia-Pacific. We believe all nations and peoples deserve to live in security and peace, and that the sovereignty and territorial integrity of every nation must be upheld, no matter their size or strength. We will continue to fly, sail, and operate wherever international law allows, and support the right of all countries to do the same. And, where disputes arise, we’ll urge all parties to resolve them peacefully and lawfully.

Third, we must keep working together to confront global challenges. We’ve seen what’s possible when American and Chinese health workers labor side-by-side to beat back the scourge of Ebola, or when the nations of the Asia-Pacific work to reduce the spread of nuclear weapons or respond to natural disasters. As new threats spill across borders—from violent extremism and cyber threats to health security and climate change—there is only one way to address them, and that is together.

Fourth, the United States must not waver in our defense of the fundamental rights and dignity of all people. This includes fighting for free and fair elections, a free press and open access to the Internet, the rights of ethnic minorities and LGBT people, because—as we’ve witnessed from India to Indonesia to South Korea—nations that respect the rights of their citizens are more just, more prosperous, and more secure.

Finally, we need to continue to empower the Asia Pacific’s very best ambassadors—our people. The future of the region will be written not by ships in the South China Sea, but by the American student studying in Beijing, the young rapper the President met in Vietnam, or the Peruvian entrepreneur who prepares low-income women for the digital economy. Connecting our people and unlocking their incredible energy and entrepreneurialism is the surest way to lift lives and expand opportunity across the region and the globe.

This APEC summit will be President Obama’s last, but it cannot and will not be the end of American engagement with the region. In this 21st century, few partnerships will be as consequential to our security and prosperity as the United States’ relationship with the Asia-Pacific. Our interests in the region are enduring. Our commitment must be as well.