Swords of Justice: Charging ISIS with Crimes against Humanity 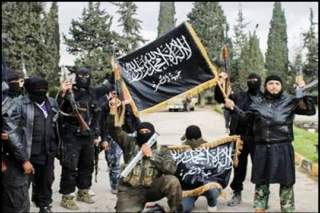 Since the Islamic State (IS) ’s unprecedented land grab in June 2014, in which it seized an expansive territory between Aleppo, Raqqa, Mosul, and Baghdad, thousands of Christians, Yazidis and Muslims have been mercilessly slaughtered in the most inhumane way. Survivors are either subjugated as dhimmi, or are internally displaced, lacking life’s bare essentials.  A recent addition to the Islamic State’s catalogue of atrocities is their Libyan franchise’s recent snuff film, featuring the meticulously choreographed, ritualistic beheading of twenty-one Coptic Christian migrant workers, as a message to the ‘people of the cross.’

It has become plainly evident that Christians are being dragged toward extinction in the Middle East, and that the Islamic State is savagely hastening that trend. In the wake of World War II, following the Holocaust, the world community made its first collective declaration outlawing genocide. The Convention on the Prevention & Punishment of the Crime of Genocide (CPPCG) entered into force in 1951, and has since enabled the prosecution and conviction of former Rwandan Prime Minister Jean Kambanda. It has become clear that the Islamist campaign to cleanse the Islamic world of its Christian population is nothing short of genocide, even by the strictest interpretation of the 1951 convention. The CPPCG defines genocide as the intent to destroy a national, ethnic or religious group by: killing members of the group; causing serious bodily/mental harm to members of the group; inflicting conditions to bring about its physical destruction in whole or in part; imposing measures intended to prevent births within the group; and forcibly transferring children of the group to another group.

However, the world, while looking on, has been hesitant to acknowledge these atrocities as genocide.

Just prior to the end of her tenure in fall 2014, UN High Commissioner for Human Rights, Navi Pillay, acknowledged that “[the Islamic State] is systematically targeting men, women and children based on their religious affiliation…ruthlessly carrying out widespread religious cleansing.”  She further opined that “all possible measures [must be] taken to avoid a mass atrocity and genocide.”

After five months of American airstrikes against the Islamic State, President Obama has cited the “genocide occurring against religious and ethnic minority groups, including Iraqi Christians” in an attempt to garner congressional buy-in for his proposed Authorization for Use of Military Force against Terrorists (AUMF). Resolve, and proper coordination with a coalition of moderate Arab states will allow military operations to deal a damaging blow to the Islamic state and bring relief to victims threatened with genocide. However, a more perfect justice would require more than kinetic military operations alone. The world community must pursue international criminal prosecution for the crime of genocide, in accordance with the 1951 Genocide Convention.  Posthumously or in absentia, criminal prosecution of the responsible actors would be of untold precedential value.

According to the Montevideo Convention, a state must have: a permanent population; defined territory; a government; and the capacity to enter into relations with other states. While the Islamic State does have a population, it would be a stretch to characterize it as ‘permanent,’ as it is not an organic, interdependent community.  It is composed of mercenary hordes who have come together solely for a nefarious purpose.

Similarly, the amorphous borders of the territory dominated by the Islamic State change everyday.

Moreover, its territory is riddled with internal pockets of government strongholds or the territories of various other armed groups. While the Islamic State does have a proto-government apparatus, and boasts a Sharia court system, it lacks the capacity to enter into international relations, due to lack of sovereign recognition.

While identifying the legal principle under which to prosecute an ANSA requires some legal acumen, a much greater challenge lies in proper forum selection, and satisfying jurisdictional requirements.

The International Court of Justice (ICJ) is the forum where international claims against a recognized state may be litigated. To fall within ICJ jurisdiction, an entity must be a bona fide state under the Montevideo Convention, and accede to the ICJ either by treaty, declaration, or other means of express or constructive consent. As an ANSA, the Islamic State does not come under ICJ jurisdiction, and thus, may not be prosecuted therein.

Unlike the ICJ, the International Criminal Court (ICC) is a forum in which individuals may be prosecuted. Created by the 2002 Rome Statute, the ICC’s stated purpose is to render justice for genocide, crimes against humanity and war crimes. Thus, Abu Bakr al-Baghdadi, “Jihadi John” (Mohammad Emwazi), and other culpable or complicit foot soldiers could be tried as individuals, rendering the international personality of the Islamic State immaterial.

If the offender’s country of origin is party to the ICC, personal jurisdiction may be satisfied.  However, it is crucial to consider that many Islamic State members have either renounced citizenship of their home nations, or have had their citizenship revoked upon joining the jihadi movement. This alone may stymie the ICC’s ability to establish personal jurisdiction. To be sure, prosecutors must review the applicable citizenship laws of each cadre member’s home nation to determine if renouncement necessarily effects legal revocation of citizenship.

All European states, with the exception of Monaco and the Vatican, are parties to the Rome Statute. Thus, the ICC could establish personal jurisdiction in the case of “Jihadi John,” provided his British citizenship has not, nor will be, been revoked prior to litigation.

If difficulties in establishing personal or territorial jurisdiction hinder the fulfillment of the ICC’s overarching three-prong jurisdiction assessment, the Security Council may, on rare occasion, expand the scope of jurisdiction (for example, in this case, to include states of former citizenship). This artificial cure to the jurisdictional defect is extremely rare; the 2005 referral of the Darfur genocide remains the only instance to date.

If the case is inadmissible due to non-referral, justice may yet be achieved through the creation of a special tribunal, as observed in Cambodia, East Timor, and Lebanon. The formation of a special tribunal to try members of the Islamic State for genocide would require close cooperation between the UN Security Council and the Iraqi government, as Syria is unlikely to respond to UN overtures.

Genocide is the ugliest of crimes, as is epitomizes man’s inhumanity to man. While military intervention is certainly required to end the current Islamic State-perpetrated campaign to exterminate the Middle East’s Christians, swift criminal prosecution must follow. The type of prosecutorial mechanism used is of little import, so long as the offenders are held to account.

Through criminal prosecution, the world community will send a strong and clear message consistent with the spirit of the 1951 Genocide Convention. The Middle East’s religious minorities, along with other vulnerable communities of the world, eagerly await this precedent.

Richard Ghazal is an advocate for Middle East Christian minorities, and a Juris Doctor candidate at New England School of Law, Boston.