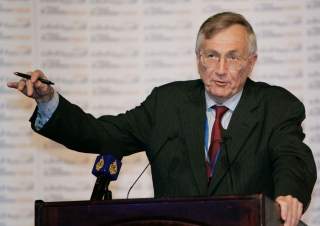 SY HERSH is calling! In the hearts and minds of legions of senior U.S. officials in the late 1960s and 1970s, thusly alerted by their secretaries, no words struck greater fear. Throughout official Washington they almost invariably prompted an attempt to evade and mislead the intrusive reporter, to destroy documents before he got his hands on them. The rare appearance of the nebbishy New York Times ace in a government building—wearing his Buddy Holly eyeglasses, a bland suit and rumpled raincoat, a cross between Woody Allen and Columbo—set hardened bureaucrats atremble.

For Hersh, one of four children of Jewish émigrés from Poland and Lithuania, humble proprietors of a dry-cleaning store in a black neighborhood on Chicago’s South Side, such moments brought sublime pleasure. And no newsman compiled a more enviable record of bombshell exclusive stories across five decades of lone-wolf sleuthing.

It was Hersh who—working as a freelancer—won the 1970 Pulitzer Prize by exposing the Army massacre at My Lai; Hersh who broke the stalled Watergate story wide open, in early 1973, by uncovering the White House payments of hush money to the burglars and their lawyers; Hersh who parted the veil, in December 1974, on two decades of illegal domestic spying by the Central Intelligence Agency (CIA), prompting the establishment of congressional oversight committees to rein in the “rogue elephant”; Hersh who revealed the CIA’s $4 billion operation to raise a sunken Soviet submarine, using the corporate empire of Howard Hughes as cover; Hersh who located the dual-records system that enabled President Nixon and National Security Advisor Henry Kissinger to bomb Cambodia without informing Congress; Hersh who plumbed the Nixon-Kissinger-CIA effort to destabilize the Allende government in Chile; and Hersh who, following the U.S.-led invasion of Iraq, brought to light the horrors of Abu Ghraib.

Those are just the highlights. Still plying his craft at eighty-one—2015 saw him publishing 10,000 words in the London Review of Books to advance a contrarian theory of the killing of Osama bin Laden—Hersh has finally published a memoir explaining how a law school dropout managed to become America’s foremost investigative journalist.

His breezy and entertaining account brims with new information on his biggest scoops, including vignettes about the famous figures he encountered—from Martin Luther King and Yoko Ono to Donald Rumsfeld and Bashar al-Assad—and revealing glimpses inside the mind of this driven and divisive man. A profoundly consequential writer, he has long rebuffed other reporters’ efforts to probe his personality and methodology. Now the investigative journalist has opened his own life and career up to closer investigation—how reliable is his account?

IT IS true, as John LeCarre states in a promotional sticker slapped on hardcover editions of Reporter, that this memoir is essential reading for all aspiring and practicing journalists—but not always for reasons Hersh might find salutary.

By his own account Hersh is “a fast-talking, hotheaded operator,” neither “gracious” nor “polite,” “mouthy” and “morally superior” and given to “whining,” “self-pity” and “temper tantrums” (“my way of coping”), an intractable employee who is “not much of a team player” and “not very interested in rules,” a writer who “took everything to heart” and would “often go nuts” when editors challenged or tweaked his writing, who once heaved his typewriter through a glass wall in his Times office before stalking out, who provoked his boss there into telling him to “shut the f*** up and get the story already,” and who “did not hesitate to engage in some low-level extortion” when such tactics were all that stood between the celebrated scribe and his next triumph.

“I was not, to put it mildly, everyone’s cup of tea,” Hersh admits. His ethos is encapsulated in the ambivalence he entertains, briefly, during his assault on CIA’s legacy of domestic spying: “It was more than a little self-serving … But a scoop was a scoop.”

To be sure, Hersh denies that he was a journalistic terrorist who bullied his subjects, using “gangster tactics,” into talking to him—legendary are the tales of Hersh bellowing into the phone that the doomed soul on the other end of the line could have it his way and stay silent, and just see how it played out on the front page of the Times the next morning—and he provides defenses, here and there, of techniques with which he has become synonymous: the use of anonymous sources and reliance on former officials as sources.

Nowhere, however, does Hersh grapple with the moral questions raised by his roughest methods, even as he provides damning detail on his employment of them. Assigned to cover Watergate by the Times in late 1972, by which point even Bob Woodward of the Washington Post had glumly concluded that “there was going to be no additional disclosure” in the case, Hersh found his path into the story in the person of Frank Sturgis, one of the burglars with CIA connections who was arrested on June 17, 1972 during the ill-fated break-in and wiretapping at Democratic National Committee headquarters. The only problem was that Hersh’s introduction to the soldier of fortune came through Andrew St. George, a writer who had reached agreement with Sturgis to collaborate on a book. The three met for drinks with the understanding that Hersh was going to write about the book deal. By the time St. George absented himself to visit the restroom, however, Hersh had picked up on Sturgis’s contempt for his collaborator and readily agreed when the Watergate burglar suggested they bolt for Hersh’s rental car.

It was a very brief moment of truth for me. Can I screw St. George to get what could be the story I need? Sturgis gave me the answer…He confirmed that he and others on the Watergate break-in team had been paid hush money since their arrest….I returned to Washington knowing that St. George would be mad as hell at me, and he had a right to be, but I had the beginning of what could be a hell of a story.

The ethos is on even starker display in Hersh’s recollection of the extraordinary spadework he performed, freelancing for the Dispatch News Service at the age of thirty-two, in what many still regard as his greatest journalistic accomplishment. His goal, in October 1969, was to find William Calley, the twenty-six-year-old Army lieutenant on whose orders, Hersh had learned, more than a hundred Vietnamese civilians had been slaughtered at the village of My Lai in March 1968. The Pentagon was quietly prosecuting Calley but the atrocity was unknown to the public.

Hersh let his fingers do the walking through old telephone books, used airport pay phones, placed pretext calls, staged dead drops, even pulled theatrical stunts, like when he would show up at some clerk’s office, dressed in the rumpled suit and clutching a briefcase, and start barking out orders for people or documents to be produced immediately, as if he were an attorney or some other authority figure. Hersh states it was his score of “a one-in-a-million bank shot,” in deft debrief of a colonel, that yielded Calley’s name. That in turn sent the roving reporter off in his ever-present rental car. Hersh’s memoir often conjures the wild, all-expenses-paid road-trip sensibility of Hunter S. Thompson, forcing us to recognize Sy Hersh, who enjoyed a good drink, as quintessentially Gonzo.

The trail led to Fort Benning in Georgia. Crisscrossing the city-sized base in stultifying heat, Hersh scoured the likeliest buildings in which to find Calley. The hours dragged on. Finally someone mentioned a young soldier named “Smitty,” freshly demoted from sergeant to private and said to possess, among his diminished duties, responsibility for Calley’s mail:

He has no idea where Calley is or where his mail ends up. I ask, resignedly, so there’s nothing on Calley in the battalion files? Well, says Smitty, we do have everyone’s 201 files. I knew that a 201 file is the military’s essential personnel folder that is kept for both enlisted men and officers. He adds, “I’d have to steal it to get it.” There’s a long pause. I say, “Well?” “I’ll try, mister.” …Smitty returns, suddenly much more animated, and slides into the seat next to mine. He opens his blouse and pulls out Lieutenant William L. Calley Jr.’s personnel file….[Smitty] is glad to have been a help – f*** the army. He leaves and I head for Calley’s new home.

To those unfamiliar with Hersh’s canon, this passage would seem to mark a signal moment, both because the conversation with Smitty produces Calley’s address, Hersh’s passport to journalistic immortality; and because it reveals a crime behind Hersh’s Pulitzer, made explicit when Smitty questions whether he should “steal” Army documents and Hersh prods the none-too-bright soldier, freshly demoted, into doing the deed (“Well?”).

And yet as damning as this passage is, it actually diminishes Hersh’s culpability, at least when contrasted with earlier accounts he has provided about his great breakthrough. The disparity suggests only a few possibilities, none uplifting: that Hersh forgot his earlier versions of events; that, for Reporter, he deliberately recast them—or, more aptly, revived them, with some conscious agenda, literary or otherwise, in mind; or, most troubling, that when the subject is himself, he feels unbound by any obligation to factual accuracy, consistency or any of the other hallmarks of journalism or history.