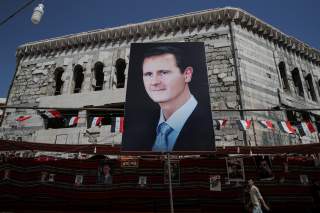 As soon as the first bullets were fired at Syrians demonstrating for freedom and dignity in March 2011, the international community has been repeating two specific talking points almost every month of every year. One, Syria’s civil war would only end when the Assad regime and the opposition found the courage to sit around the same table in search of a political agreement. And two, there was no legitimate scenario whereby Bashar al-Assad could continue living in the presidential palace. If Syria’s wounds were to heal, then Assad would have to go.

U.S. and UN officials bought into their own narrative. In 2012, when the war was still at a relatively manageable level, then-U.N. Secretary General Ban Ki-moon told a news conference that “I think military means will not bring an answer. That should be resolved through political dialogue.” In 2016, then-Secretary of State John Kerry—who spent much of his tenure trying to goad Syria’s warring parties into talks—passionately argued that diplomacy was literally the only option because “ultimately there is not a military solution.” Presidents Donald Trump and Vladimir Putin agreed (at least on paper), releasing a joint statement after their November 2017 meeting all but calling a military solution a prelude to more killing.

Assad, of course, had another idea entirely. To the Syrian dictator, catering to the opposition’s demands or even negotiating with his enemies in good faith was a slippery slope to loosening his regime’s hold on Syria’s power structure. While the world continued to insist that politics was the only way out, Assad viewed politics as an unworthy concession to an enemy seeking to destroy him. Devolving power to the local level, tinkering with the powers of the Syrian presidency, or signing on to his own departure date—all of which Washington, Europe, the opposition, and much of the Arab world were demanding—was in Assad’s eyes a ridiculous proposition unworthy of consideration.

If the Assad regime was going to end this war, it was going to be done by barrel bombs rather than ballots or peace settlements. Those who dealt with Syria all their lives and knew how the regime operated always knew Bashar al-Assad was implacable to compromise. And if there were compromises to be made, they were simply tactical maneuvers to buy time and prepare for the next offensive.

It’s not that Damascus is opposed to putting its name on an agreement. Assad has signed a few de-escalation accords during this eight-year-war, including one that carved out four separate areas where shooting and bombing were purportedly off-limits. The problem, rather, is that Assad never implemented the deals he agreed to nor had any intention of abiding by them over the long-term. The eastern suburbs of Damascus, Homs, Hama, and Aleppo were all de-escalation zones at one point in time; today, all or most of these areas are now under Assad regime control.

The northern Syrian province of Idlib is the final domino to fall. Desperate to prevent a bloodbath last year and a surge of hundreds of thousands of Syrian refugees, Turkey and Russia agreed to establish a nine-mile buffer-zone to separate regime and rebel fighters. All jihadist elements would be removed, Syria’s M4 and M5 highways would reopen, and Assad’s military offensive would be called off. The arrangement has lasted for eight months with intermittent violations, longer than most expected.

But seeing murmurings from some of his Arab counterparts about bringing Syria back into the fold, Assad smells victory and has little incentive to continue to hold his fire. Since the end of April, 150,000 Syrians have been forced to move due to an increase in regime and Russian airstrikes according to the UN Office for the Coordination of Humanitarian Affairs. Seven hospitals have been rendered inoperable. Schools have been hit. We may be seeing the beginning stages of the final, large-scale operation.

Capturing Idlib, the last bastion of opposition resistance to the regime, would in effect end the war militarily.

Syria will be a broken, poverty-stricken country for at least a generation. The country is in a massive financial hole, unable to pay its debts to countries like Iran and Russia who rode to Assad’s rescue. 80 percent of the Syrian people are broke and require handouts from aid groups. The fuel shortage in regime-controlled areas is becoming increasingly untenable for the average Syrian. Syrian society is divided, demographics have changed, and its politics are as dominated by the Ba’ath Party as it was before the war. There will be sporadic attacks on Syrian

government troops, terrorist attacks, and low-level violence for a while yet.

In Assad’s mind, though, this is the cost of a military victory—one Washington and its allies in the West never thought was on the table.