From Syria to China, U.S. Leaders Don't Know What America is For 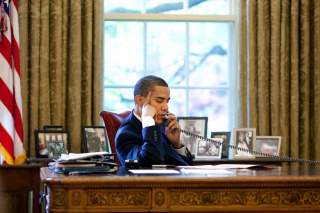 The United States suffers from a severe case of strategic confusion, manifest in the country seeing enemies where none exist and showing an inability to concentrate action where they do exist. Given the immensity of American power relative to the rest of the world, this malady has a tendency to wreak havoc and generate tension in areas of American involvement. And the confusion seems so thoroughly embedded in the country’s collective psyche that prospects for any reversal remain dim. That bodes ill for America and for the world.

Consider our actions, and their consequences, of the last fifteen years. Following the seminal events of September 11, 2001, when the country was attacked by that tightly wound Islamist knot of anti-Western fervor known as Al Qaeda, the United States toppled the Afghan regime that had succored Al Qaeda and dislodged the Islamist force from the habitat from which it sought to menace the West. This was necessary and entirely appropriate.

But then we invaded Iraq, ruled by a secular tyrant who had nothing to do with the kind of Islamist radicalism that was the true enemy. This generated multiple consequences of immense difficulty. It unleashed sectarian fears and passions in the country that for years destroyed prospects for stability—and led to the deaths of nearly 4,500 Americans and an estimated 174,000 Iraqis, most of them civilians. It enflamed the region in ways that spawned a new Al Qaeda force in Iraq where previously none had existed, or could exist. It upended a centuries-long balance of power between Sunni-dominated Iraq and Shiite Iran, thus creating new challenges of stability and new difficulties in the U.S.-Iran relationship. Perhaps worst of all, the Iraq invasion and its chaotic aftermath have sapped America’s appetite for confronting the true enemy in the Middle East.

The true enemy is Islamist fundamentalism, just as it was when President George W. Bush took America on the Iraq detour. The Al Qaeda aim then was to draw America into a desert quagmire and diminish its confidence, unity and strength. It couldn’t succeed in doing that without American strategic confusion.

What the U.S. invasion didn’t do was turn Iraq into a Middle Eastern model of democratic practice, as many invasion advocates, in their confusion, had predicted. Some people thought the so-called Arab Spring, a wave of seemingly pro-democracy protests across the Middle East beginning in December 2010, would usher in such a new era. President Obama promptly expressed support for the protesters, including some motivated more by Islamist fundamentalism than by true democratic impulses. He undermined the standing of Egypt’s Hosni Mubarak, a staunch U.S. ally for decades, and assisted the emergence of the Islamist Muslim Brotherhood (which ruled the country for a time before the old military oligarchy regained governmental dominance).

This represented strategic confusion of a very high order. It had been Islamist fundamentalism that had attacked America on 9/11, that had attacked Britain and Spain in succeeding months, that had vowed a relentless terrorist campaign against the West. Mubarak was opposed to all that; the Muslim Brotherhood had flirted with that kind of radicalism for decades. Why would an American president undermine a foreign leader who was a steadfast U.S. ally and an opponent of the Islamist fundamentalism that represented one of America’s most menacing enemies? There’s only one answer: strategic confusion.

Then, when Libya’s Muammar Qaddafi found himself beleaguered by internal protests, Obama turned on Qaddafi, who had promised to end anti-Western terrorist activities and abandon efforts to produce weapons of mass destruction. In exchange, he was to be left alone. But Obama reneged, leading a bombing campaign against Qaddafi, who represented no threat to America whatsoever. The president cited “our responsibilities to our fellow human beings” and said that if America had stayed out of the fray it would have been “a betrayal of who we are.”

We know the result: a Libyan civil war producing utter chaos in the country, masses of Qaddafi’s weapons making their way into the hands of the rabidly radical Islamic State, the killing of a U.S. ambassador and other American officials. All in the name of “our responsibility to our fellow human beings.” That phrase in itself represents a highly distilled form of strategic confusion. Where does this responsibility lead us? How many bombing campaigns and wars would have to be waged if the protection and happiness of our fellow human beings, all around the world, were to be our global remit? What does this have to do with every president’s primary imperative of protecting America and its citizens, not humanity, from outside threats?

Then there’s Syria. When its brutal president, Bashar al-Assad, found himself beset by internal dissention, the U.S. government promptly adopted a position that he had to go. Then came the emergence of the Islamic State (also known as ISIS or ISIL), potent enough to capture territory in Iraq and Syria and use that territory as spawning ground for further regional expansion and growing global menace. Its aim was to topple Assad and dominate, in the name of a restored caliphate, the lands that have been Syria since the end of World War I. Our aim was to thwart the further territorial gains of ISIS and destroy its ability to project terrorist activity into the West. Assad’s aim was to defend his country from the growing ISIS threat (along with other forces bent on destroying his regime). Russia, Iran, Hezbollah and the Kurds of Syria and Iraq all wanted to defeat ISIS.

A sensibility of strategic coherence in Washington would have produced a clear understanding: Since ISIS represents a major threat to regional stability as well as to the security of Western nations, whereas Assad represents no threat at all, the obvious approach would be to align with those forces bent on defeating ISIS and not worrying about the fate of Assad. But such strategic coherence eluded Washington policymakers, who couldn’t abandon their conviction that Assad must go. The result was a kind of policy paralysis, with Russia moving in and capturing the initiative with a much tighter view of the situation.

A recent AP story suggests that the “tide of global rage” against ISIS after the carnage of its Paris attack produced a sense of “greater urgency to ending the jihadis’ ability to operate at will from a base in war-torn Syria.” The news service said that this emerging attitude “could also force a reevaluation of what to do about… Assad and puts a renewed focus on the position of his key patrons, Russia and Iran.”

But the piece quotes U.S. Secretary of State John Kerry as repeating his constant refrain that Assad’s departure “has to be part of a transition if you’re going to end the war”—hence more strategic confusion. A casual review of the relative power on the ground tells us that we can’t defeat ISIS while also waging war with ISIS’s primary opponent in Syria, the Assad regime, particularly as Assad is supported by Russia, Iran and Hezbollah.

Consider the strategic confusion of the 2012 GOP presidential nominee, Mitt Romney, when he wrote in a Washington Post piece that we need to create an anti-ISIS coalition made up of Kurds, Turks, Saudis, Egyptians and Jordanians. As conservative commentator Patrick Buchanan pointed out, his coalition (leaving aside the Kurds) includes countries and forces that haven’t demonstrated any serious anti-ISIS commitment, and excludes all the countries and forces that have demonstrated through dangerous action their opposition to ISIS.

This is not serious strategic thinking. It lacks even a rudimentary sense of the realities of the situation and hence lacks a potential for generating a decisive American initiative against ISIS. One big stumbling block for Romney and likeminded people is Russia, the subject of much strategic confusion in America.

Given its resources and position upon the Eurasian landmass, Russia always has and always will represent a potential threat to the West. That needs to be borne in mind in policymaking at all times. But Russia’s geopolitical center, lying unprotected behind vast expanses of steppe grasslands, also renders it highly vulnerable to invasion from the West, whence major incursions have emanated in just about every century of its existence. Given that, Russia inevitably will resist efforts to rip away its traditional areas of influence, including Crimea and Ukraine. It will resist NATO efforts to push up to the Russian border with rockets and troops. It will take umbrage when American NGOs and foreign policy officials whip up dissension in western Ukraine as a way of ripping that territory away from Russian dominance, which Russia has maintained almost uninterrupted for centuries.

Weighted down by strategic confusion, many American politicians and foreign policy officials seem to think that Russia can be kept at bay only by bellicose rhetoric and provocative policies, designed to push into Russia’s traditional spheres of influence and neutralize its influence. This won’t work. It will simply incite, as indeed it has incited, Russia’s natural sense of vulnerability, and stir provocative and bellicose responses.

A more strategically sound approach would be that which Otto von Bismarck adopted after he consolidated the German nation under Prussian auspices in 1871. Knowing this powerful new entity in the center of Europe would generate fears among its neighbors, he studiously refrained from actions that could exacerbate those fears. His aim was to project the image of a restrained and friendly power satisfied with its favorable position upon the continent. After Kaiser Wilhelm II dismissed Bismarck and embarked upon a policy of provocative military expansion, the European equilibrium collapsed, and a course was set toward World War I.