In Syria, the Classroom Has Become a Battleground 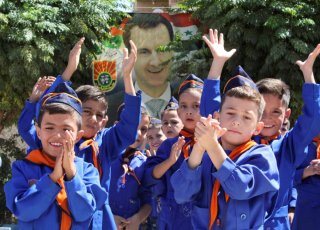 As the higher education system in Syria disintegrates and 2.4 million young people in the country receive no schooling whatsoever, one would be forgiven for underestimating the importance of education in the turmoil that envelops Syria. Of course, the most-covered aspects of the conflict are often chemical weapons attacks and battles for territory between pro-government and opposition forces.

Yet, for as long as they have been around, dictators have cast one eye carefully on the young citizens of their regimes, for it is the young who will carry forward their legacies long after their deaths. On that front, the Assad regime is no different. Bashar al-Assad’s father, Hafez, who ruled as president from 1971-2000, pursued a policy of youth recruitment and indoctrination for his Ba’ath party.

A similar focus continues under his successor. The Institute for Monitoring Peace and Cultural Tolerance in School Education (IMPACT-se), a research and advocacy organization that monitors and analyses education, issued two reports—one in 2001 and another in 2018—demonstrating a stark continuity in the Syrian curriculum in regime-controlled areas over the last twenty years. Common themes included virulent anti-Semitism, a broader atmosphere of intolerance, and a stress on the righteousness of the regime.

Prior to 2011 and the uprising against the regime, all schoolchildren had to study the broad subject of quamiyya, or nationalism, which inter alia involved chanting “long live Assad, love live Ba’ath” prior to the start of the school day. The “National Education” curriculum teaches the fundamentals of the Arab Socialist Baath Party, the general secretary of which is, of course, Bashar al-Assad, and Arab nationalism. It refers to Hafez al-Assad as the nation’s “eternal leader.” While education was always a tool of the regime, amid the civil war it became an active weapon. Muhammad Masud, an expert on authoritarianism at the University of Massachusetts in Boston, details how the party began to “use textbooks to attack its challengers, display its power, and deny accusations of human rights violations,” using education “as part of a systematic process of maintaining control of the country” alongside “brute force and unforgiving military power.”

The Classroom as a Battleground

Since 2011, the importance of education has been reflected in attempts by warring groups to reform the education system in areas under their control. Over the past decade, students have been taught widely disparate curricula depending on which faction rules the area in which they are educated. Those in regime-controlled locales are subject to the same indoctrination those living under an Assad regime have become accustomed to over the past half-century. The regime is not the only ruler pursuing educational dogma. Those in territory controlled by the rebels experience parallel systems. Educational courses imposed by the Islamic State (ISIS) swap science, math, and reason for “jihad and sacrifice for the sake of God.”

Unsurprisingly, anti-regime groups have sought to do away with the regime-sponsored indoctrination, only for it to be replaced by alternate forms of political and religious proselytization. In 2015, Muhannad Hadi and Mohab Zaidan reported on the system experienced by children in Idlib, an area controlled by the Hayat Tahrir al-Sham (HTS) and the so-called Syrian Salvation Government, which had abolished the “nationalism” course and everything related to the regime. Children in so-called “liberated areas,” rather than honor Assad and Ba’ath flags, began the school day by saluting Salafi and Salafi-Jihadi flags and honoring the “Islamic Caliphate” and the prophet Muhammad. Children in ISIS-controlled territories have been deprived of the opportunity to study such subjects as history, art, and music because of the “depravity” they supposedly inspire. In the north of the country, the Syrian Interim Government’s Ministry of Education, with the support of Doha, printed millions of revised, pro-opposition textbooks and distributed them in opposition-controlled areas.

Such policies constitute what one might term “positive’” limitations by governments to indoctrinate their citizens. But almost as important are “negative” limitations—that is, what academics and students cannot, or will not, say. Self-censorship has long been a feature of autocratic regimes, and Syria is no different. Unsurprisingly, it was one of twenty-three countries to receive an “E Status” ranking on the 2020 Academic Freedom Index, putting it among such unfavorable comparators as North Korea, Eritrea, Iran, and Turkmenistan. The regime has arrested supposedly “disloyal” teachers, no doubt partially contributing to the swathes of educators who have left their jobs, numbered at 180,000 in 2018.

IMPACT-se’s 2018 analysis found that the regime not only sharply shapes youngsters’ views of their own nation but their perception of the outside world as well. The multi-faceted civil (and proxy) war in Syria is reflected in the textbooks children are exposed to.

Unsurprisingly, Russia is viewed overwhelmingly positively. Since 2014, foreign language studies include Russian, and students now choose between French and Russian as their second foreign language (English is first). This is no doubt a coup for the regime in Moscow, too. During the Cold War, thousands of young scholars from the third world were invited to study at the Patrice Lumumba University (now The Peoples’ Friendship University of Russia) in a bid to bolster Soviet soft power in non-aligned countries. While Russia-Syria relations have not developed to such an extent in the modern era, the portrayal of Russia in the Syrian curriculum is a reflection of the significant support afforded to Assad by Russia.

Conversely, Turkey, which has maintained a strong anti-regime position, is denigrated. Its “Ottomanism and pan-Turkic imperial drive” is portrayed as being a threat to Syria’s pan-Arab ideology. IMPACT-se found that Turkey’s approach to Islamism and the Islamic way of life is painted by the regime’s textbooks as being incompatible with the “Syrian worldview.”

On the other hand, the IMPACT-se analysts found, also unsurprisingly, that Israel, alongside its Western allies, is portrayed highly negatively. It is not directly named but merely dubbed the “Racist/Terrorist/Zionist Entity,” and Jews are the subject of age-old anti-Semitic tropes. When it comes to Israel and the states with which it is in perpetual conflict, the Assad regime peddles revisionist history, teaching that Israel is a terrorist state and that Syria’s support of terrorism in Lebanon, Iraq, and Israel is “resistance.” Perhaps most worryingly, it teaches that “all means are legitimate in the war against it, including terrorism and suicide attacks.”

Such sentiment is not just evident in textbooks and the education system, but more widely in the media, too. Virulent anti-Semitism has been a mainstay of the regime for decades, as shown by the long list of conspiracy theories peddled in regime-sanctioned media outlets and Assad’s own troubling history with the topic. Young Syrians’ minds are being poisoned with anti-Semitic and violent messages at school and at home.

In light of the above, it is little wonder that the researchers concluded that vast swathes of the curriculum do not meet UNESCO standards and guidelines for education, peace, and tolerance. Rather, the curriculum is riddled with mendacities that support the regime’s twisted worldview and impose it on malleable youngsters.

What is clear is that any reconciliation and reconstruction process in Syria will not just be a physical one focused on rebuilding cities and towns, but also a mental one with emphasis on the rehabilitation of millions of scarred youths.

At present, those who do have access to education are indoctrinated, which has contributed to the nation’s tumult, the 2018 IMPACT-se analysis concluded. In place of intolerance, sacrifice, and slavish pro-regime messages, children must be taught objectively. Classrooms should be places free of ideology and full of curiosity and progress—not merely theatres for the continuation of conflict by other means.

In Syria, at present at least, the pen is not, as the saying goes, mightier than the sword; rather, the two are deployed in conjunction with one another and serve the same insidious ends.

Marcus Sheff is the CEO of The Institute for Monitoring Peace and Tolerance in School Education (IMPACT-se). He held positions as a political reporter at The Nation as well as an editor at The Jerusalem Post. He also previously held positions at Dow Jones International, Advanstar Inc., and The Israel Project.