Syria Faces Omicron Amid a Shortage of Vaccines 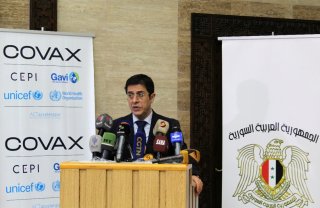 5 percent of Syrians are fully vaccinated against Covid-19, placing the country’s vaccination rate just below Somalia in the global rankings. The Delta variant ripped through Syria in September and October, stressing what remained of a healthcare system already broken by a decade of war. So far, the hyper-contagious Omicron variant has proven to be less lethal than its predecessors, yet few countries are as ill-prepared as Syria to handle its arrival.

Syria’s official infection and fatality rates are fictional numbers that get included in trusted sources of public health data. The New York Times, the World Health Organization (WHO), and Johns Hopkins’ Coronavirus Resource Center all republish the figures provided by the Damascus regime. By their lights, fewer than 3,000 Syrians have died from Covid-19, a fatality rate lower than that of Finland and Norway.

First-hand reports from hospitals have been telling a very different story ever since the first major wave of infections hit Syria in the summer of 2020. Medical staff told foreign reporters that they were working around the clock with inadequate protective gear while intelligence officers monitored the wards. During the Delta wave, the extent of the regime’s underreporting came into slightly better focus.

After a decade of war, Syria remains divided into three principal regions. The Assad regime controls the major cities and ports in the western half of the country. Washington’s Syrian Kurdish allies, who helped dismantle the ISIS caliphate, now govern the region northeast of the Euphrates. Finally, anti-Assad rebels aligned with Turkey and al-Qaeda hold sway in the northwest, where the prewar population of roughly 1.3 million has grown to over 4 million.

The overcrowding in the northwest is the result of the mass flight of civilians from areas under regime control. Living in tents and ruins, the displaced survive thanks to humanitarian aid that arrives from nearby Turkey. This aid included thousands of coronavirus tests, which began to generate a flow of infection data that Damascus could not censor.

While testing capacity in northwest Syria remained far below that of neighboring countries, let alone Europe or the United States, the impact of Delta was plainly visible last summer. After reporting less than 1,000 new cases in all of July, the northwest began to confirm 1,000 new infections per day in late August, according to the UN’s Office for the Coordination of Humanitarian Affairs (OCHA). After the northwest reported 12,000 new cases in August and more than 34,000 cases in September, the wave appeared to break in October.

Yet the percentage of positive tests ranged from the mid-30s to the upper-50s, indicating that asymptomatic infections mostly went uncounted. For the period from August through October 2021, OCHA reported a death toll of 1,120, likely an undercount given both a lack of hospital beds and an aversion to treatment at poorly equipped facilities where infections spread easily.

Despite having a population roughly three times greater than the northwest, the areas under Assad’s control reported a far lower case count. The regime reported about 15,000 new infections in September, when Delta peaked, and just 324 deaths from August through October. At a minimum, the WHO and other statistical authorities should announce that they have lost confidence in the figures coming out of Damascus and stop disseminating them. For the WHO, this would represent a notable first step toward ending its years of deference to a regime that bombs hospitals and punishes disfavored populations by depriving them of healthcare.

As in other countries, statistics do not convey the extent of the suffering. In Syria, the pandemic’s disruption of the economy has worsened widespread hunger, while hunger has prevented Syrians from taking measures to restrain the pandemic. Unmasked and unvaccinated, a vegetable seller named Essam Hassan told a Voice of America (VOA) reporter last October that he cannot afford to miss even a few hours of work, or his family would miss meals. “Hunger is more frightening than coronavirus,” Abdullah Omar, the owner of a children’s clothing shop told VOA. Reporters have heard these sentiments continuously over the past two years.

Yet those with severe infections learn how frightening it is to be sick when the healthcare system is in shambles. In the northwest, where airstrikes have deliberately targeted medical facilities, the number of seriously ill patients often exceeded the number of beds available in intensive care units (ICUs) during the delta wave. Patients who need an ICU bed “either have to wait for a patient to be moved from the wing, or to die so another can replace them,” as a physician named Absi Mohamad Fouad explained to Reuters in September. Those who do get beds have to contend with shortages of oxygen and other critical supplies.

COVAX, a global vaccine distribution program led by the WHO and its partners, initially held out the best hope for countries like Syria. The program set out with the goal of providing enough vaccines for 20 percent of the population in every participating country. It never came close. Shipments arrived late or not at all. Some vaccines passed their expiration dates or became useless because they were not stored in freezers. An adviser on vaccination policy at Medecins Sans Frontieres described the program as “naively ambitious.”

Officially, Syria has administered 2.9 million doses of the vaccine, with just over 850,000 individuals now fully vaccinated. Whether those numbers are reliable is much harder to say. Determined to ship the greatest possible number of vaccines, COVAX never put in place guardrails to ensure equitable distribution, even though the recipients included repressive dictatorships on par with Syria, such as Myanmar and North Korea.

Intermittently, the WHO has reported on the extent to which vaccines have reached those parts of Syria outside of Assad’s control. Since the northwest can receive aid via truck from across the Turkish border, some meaningful shipments have reached its 4 million inhabitants. Yet Assad determines whether any vaccines make it from Damascus out to the northeast. In mid-November, the WHO reported that more than 687,000 Syrians were vaccinated in areas where the regime controlled distribution. Of those, some 42,000—or just 6 percent—lived in the northeast, a ratio far out of line with the area’s population, which is between a quarter and a third as large as the population under Assad’s control.

The Omicron variant has demonstrated its ability to break through the vaccine’s defenses, although the infections it causes appear to be substantially less lethal. What this means for Syria is difficult to forecast. With few vaccines or other mitigation measures in place, Omicron may spread so fast that its diminished lethality does not prevent a wave of illness from overwhelming hospitals while the death toll spirals. At the same time, Syria may race ahead of other nations toward herd immunity if Omicron becomes ubiquitous. What’s certain is that Syrians will have to make the best of a desperate situation while the Damascus regime prioritizes its own survival.

David Adesnik is a senior fellow and director of research at the Foundation for Defense of Democracies.

K.M. Schaefer recently completed an internship at the Foundation for Defense of Democracies.