Syria: The Largest (and Most Important) Conflict of the 21st Century 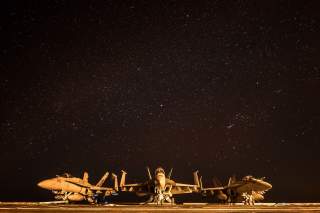 Justifying airstrikes against Syria, U.S. President Donald Trump harkened back one hundred years to World War I. “Following the horrors of World War I a century ago, civilized nations joined together to ban chemical warfare,” he said on April 14. The Syrian war conjures up many past conflicts with commonalities to saber-rattling of the Cold War and the fragmentation of the Thirty Years War. All of the comparisons illustrate how the war has become the most important conflict of the twenty-first century with a legacy that will last long into the future.

The Syrian conflict has become important because of the involvement of world powers and because the conflict has been the vehicle through which Iran and Turkey—as well as other countries in the region—have developed their future policies. Countries have also developed new models, nurturing local militias, partner forces and clients. As the conflict cycled through various phases it has become a key to the region and the broader international community. That was on display in early March and in November 2017, which is when Russian president Vladimir Putin met with Turkish president Recep Tayyip Erdogan and Iranian president Hassan Rouhani in Ankara and Sochi.

The conflict should be seen in a series of “acts” or phases. The Syrian rebellion grew out of the Arab Spring and began in 2011. By 2012 the rebels had become armed and countries such as Qatar and Saudi Arabia were voicing support for them. They were mostly Sunni Arabs opposing a regime led by Alawites, a minority group. Hezbollah stepped in to aid the Syrian regime and the United States and other countries, such as Saudi Arabia and Turkey, began to tentatively support the rebels. By 2014 the Islamist aspect of the rebellion had carved out a power vacuum in Syria that Islamic State exploited and filled, using it as a launchpad to attack Iraq. The creation of a U.S.-led coalition was a response to the rise of ISIS. Eventually almost seventy countries would be involved in fighting ISIS, and some of them would have boots on the ground in eastern Syria with the Syrian Democratic Forces, a Kurdish-led partner force.

From 2015 the Russians upped their involvement in Syria and from 2016 the Turks began to operate in a large swath of territory in northwest Syria. At every turn Assad has played for time, encouraging the other factions in Syria to fight each other. For instance, he largely abandoned eastern Syria and the north to ISIS, the Kurds and the rebels. When the United States shifted priority to fighting ISIS rather than toppling the regime in 2015, Damascus breathed a sigh of relief. The same was true in January 2018, which is when Turkey attacked the Kurdish region of Afrin using Syrian-rebel allies to help it push “PKK-aligned terrorists” out of the district. Each phase of the conflict has drawn in new actors and empowered some and weakened others, redrawing the map of the region in a symbolic way one hundred years after World War I did had the same geographic impact. The Syrian conflict, which appears that it will drag on for a decade, has been a source of regional instability and chaos. Iran is a central beneficiary of this.

Iran has used the Syrian conflict as a springboard for greater influence in the region. It was already an ally of Damascus but Bashar al-Assad’s loses on the battlefield have increased the role of Iranian-backed militias in Syria. The Carnegie Middle East Center noted that “numerous reports point to Iranian funding and training” of the National Defense Forces in Syria in 2015. “If Assad is still in power by war’s end, he will be beholden to Iran because of his army’s frequent inability to secure territory on its own,” a Washington Institute for Near East Studies report concluded in February 2018. Israel’s frequent airstrikes on Syria have been directed at Iran’s bases and attempts to move weapons to Hezbollah via Damascus.

Iran’s allies, particularly Hezbollah, have benefited from the Syrian war. Hezbollah was able to pose as the defender of Lebanon during the conflict, even though it was Hezbollah that intervened in the conflict. ISIS fighters infiltrated Lebanon in 2014 and set up camp in the Qalamoun mountains on the border between Syria and Lebanon. When the Lebanese army could not dislodge them, Hezbollah helped broker a deal that saw the fighters bussed to the Euphrates valley in 2017. It was only able to do this because the regime and Russia tacitly approved.

For the United States the war in Syria has proved a major policy challenge. Secretary of State John Kerry was bedeviled by the Geneva peace process and Barack Obama stepped back from air strikes in 2013 after Assad was accused of using chemical weapons. Whereas Washington stumbled on crafting a muscular policy vis-à-vis Damascus, the anti-ISIS campaign led to a massive case of mission creep as the United States not only moved into eastern Syria but began setting up bases and investing heavily in training and stabilization. The Kurdish partners in eastern Syria became a key ally and appeared to be on the road to carving out an autonomous area under a U.S. air power umbrella akin to what the Kurds in Iraq achieved in the 1990s. U.S. forces almost came into conflict with Turkish forces as the diverging policy in eastern Syria led one group of Washington allies to almost fight a NATO partner. Unlike with Iraq where the U.S. policy was clearly taking a backseat to Baghdad’s choices, the U.S. role in eastern Syria was unprecedented in its scope and how it developed.

Turkey was also fundamentally changed by the Syrian conflict. After the ceasefire with the PKK broke down in 2015, and in the wake of the coup attempt in 2016, Turkey become increasingly active in its foreign policy. Its previous policy of “zero problems with our neighbors” has been replaced with a major commitment to patrolling and securing three areas in northern Syria; the Jarabulus corridor, Afrin and parts of Idlib. The Syrian rebels who once used Turkey only as a conduit and rear-area resting place have become client of Ankara, a major role reversal.

Ibrahim Kalin, Erdogan’s presidential advisor, spelled out what a Syrian peace process looks like in Damascus in a column in Daily Sabah on April 13. It envisions a focus on “establishing a legitimate, democratic and inclusive political order without the Assad regime or terrorist networks like Daesh, Al Qaeda, the Democratic Union Party (PYD) or the People’s Protection Units (YPG).” The PYD and YPG are Kurdish groups that have worked closely with the United States and which played a key role in defeating ISIS in eastern Syria. This statement shows how deeply Turkey has bought into the Syrian conflict and how it now guides Ankara’s decisions.

Russia has also seen the Syrian war as a priority to establishing its credentials in the Middle East. Alex Grinberg, an expert on Russia and Iran, argues that Putin’s Syria policy, particularly vis-à-vis the U.S. airstrikes, is haunted by the trauma of the Kosovo conflict in 1999. While Russia’s Ukraine involvement has not achieved its goals, the decision to intervene in Syria has saved the regime and likely aided Russia in its other goals in the region. Traditional western allies Saudi Arabia, Egypt and Turkey have all approached Russia about purchasing its S-400. Syria should be seen as a key to Russia re-establishing itself not only as a premier Middle East power, but as an international power. The fact that Putin outmaneuvered Washington to host Syria talks in Astana and then in Sochi without a U.S. presence is emblematic. Israel under Prime Minister Benjamin Netanyahu has also sought out Russia numerous times to discuss Syria and the Iranian threat.

The mid-April airstrikes illustrate that Syria is now a global war. Whoever wins in Syria will determine the future of the region. Each side interprets a victory a bit differently. For Russia a triumph would be for its Damascus regime ally to survive. That could be a frozen conflict for many years, like Russia has stoked in eastern Ukraine. Having a client in forever war cements Moscow’s ties, it doesn’t weaken them. It gives Moscow an excuse to base military assets in Syria.

For Turkey a victory in Syria would mean the ejection of the YPG from the border area and an end of U.S.-SDF relations. Turkey also wants to see the millions of Syrian refugees it has hosted begin to return home. The European Commission has been funding multibillion-dollar payments to Turkey under a deal to solve the migrant crises with the EU in 2016. Ankara pays lip service to Assad leaving power, but it appears to have given up on this ever happening.

Iran’s goal in Syria is more complex. It wants a corridor of influence stretching from Tehran to the sea. It wants this influence intact and not threatened by Sunni jihadists or the United States. But Iran is willing to wait and work slowly to influence politics in Beirut, Damascus and Baghdad. It wants to ensure that it keeps key ministries after the Iraq elections in May, for instance. Iran also wants to threaten Israel from Syria, something that it has done by building bases and through its constant rhetoric against Jerusalem.

This leaves U.S. policy as one of the major questions. While every other country has a clear policy, if not always a clear goal, the U.S. strategy is mixed. Former Secretary of State Rex Tillerson has said a post–war Syria should not include the Assad regime. Donald Trump says that he wants to see ISIS beaten and then he wants to withdraw U.S. troops while the Pentagon has voiced plans for a more long-term commitment. With John Bolton as national security advisor and Mike Pompeo heading for the State Department, a new policy may emerge. While Pompeo has been very tough on Iran in the past, his more recent comments have indicated a more diplomatic approach to “fix” the Iran deal.

Washington seems unwilling to realize how unprecedented its commitment to eastern Syria is. Because the policy in eastern Syria grew out of an anti-ISIS campaign there is reticence to shift the eastern Syria commitment to one that might also be part of a broad policy of rolling back Iranian influence. Instead, the idea is to keep fighting ISIS. This puts the United States at a loss in comparison to every other country playing a roll in Syria, all of whom know what they get out of the conflict. Given the conflict’s clear importance in the shifting power centers of the Middle East and how it has become a global conflict, Washington would do well to give it the strategic attention it deserves.

Image: Three F/A-18 Hornets rest on the flight deck of the aircraft carrier USS Theodore Roosevelt (CVN 71) in the Arabian Gulf on Dec. 22, 2017. Theodore Roosevelt and its carrier strike group are deployed to the U.S. 5th Fleet area of operations in support of maritime security operations to reassure allies and partners and preserve the freedom of navigation and the free flow of commerce in the region. ​Flickr / U.S. Department of Defense.