Syria Will Be Won By Strength of Arms, Not Words 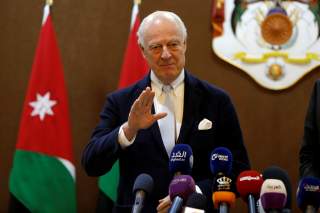 Last week, Staffan de Mistura—the exhausted but ever jovial UN special envoy to the Syrian conflict—delivered what could be his very last press stakeout as the secretary-general’s special envoy to the Syrian conflict. Asked whether he felt optimistic about the future of the Syrian peace talks, de Mistura didn’t give a definitive answer. Instead, he relied upon an old adage that he has used throughout his nearly four-and-a-half years as the UN’s point man: “What I can say [is] I am determined...to leave no stone unturned until the very last hour of my tenure.”

In a few weeks, that tenure is coming to a close. And to de Mistura’s disappointment, the four-plus years of dogged diplomacy hasn’t produced very much—if anything—for a Syria ravaged by civil war. The fact the violence in Syria is slowly decreasing and the front-lines are now stabilizing has less to do with the UN peace process and more to do with the blunt reality that Bashar al-Assad has won the conflict through brute force and unforgiving siege warfare.

When former UN Secretary-General Ban Ki-moon first offered de Mistura the position of special envoy in July 2014, the Italian-Swedish diplomat was conflicted. From the outside, Syria’s war looked like an ever-raging fire burning everything in its path. Kofi Annan and Lakhdar Brahimi, two of the UN’s most experienced and respected troubleshooters, already failed in their job as firefighters; Annan resigned after it became clear the Security Council was systematically divided on Assad’s future, and Brahimi resigned in frustration over the Syrian regime’s lack of cooperation. Staffan de Mistura, however, couldn’t refuse the job and live with himself, knowing that thousands of Syrians were dying every month. Hours later, in the middle of the night, he called Ban back and accepted the challenge.

With over forty years of experience as a humanitarian and a conflict mediator under his belt, de Mistura needed to tap every year of it if he had any chance of taming Syria’s violence. He tried everything he could think of: temporary freezes in hostilities to build confidence among the combatants on the road to negotiations; getting the Security Council more engaged on the political track; lobbying the parties for increased humanitarian access; establishing a constitutional committee where Syrians of all walks of life could get together and hammer out a new constitution. When Washington threw up its hands and essentially relegated Syria into a lost cause, de Mistura used his eternal optimism to power through.

None of it succeeded. The only ceasefire that has actually held for any length of time was the result of a joint initiative from Turkey and Russia, two countries more concerned with their own national interests than the finding a way to stop the bombing and the shooting for the sake of the Syrian people. De Mistura’s work on the constitutional committee, nearly a year in the making, has suffered from endless delays as Assad’s representatives resist the very idea of scrapping the old constitution and starting anew. The UN-facilitated peace process is not really a peace process at all, but rather a way to slow down the inevitable military victory the Assad regime has sought from the very first day it unloaded guns on unarmed protesters. Mouin Rabbani, who briefly served on de Mistura’s team, told The Atlantic’s David Kenner last month that the main objective of the UN process is to keep it above-water: “The mission became the extension of the mission.”

The Syria peace negotiations have been a mirage for a long time now, a process the international community can continue to cite in order to delude itself into believing the war will end via peaceful settlement.

De Mistura exits his job just like he entered it: hopeful, but with peace out of reach. This is not entirely his fault; any diplomat, regardless of experience, would have quickly discovered that making peace in Syria is a kind of mission impossible. There is very little a mediator can do if one side (the Assad regime) is uninterested in any political compromise whatsoever and the other (the anti-Assad opposition) is frequently divided amongst itself.

None of this, however, is much consolation to the Syrian people—half of whom have been uprooted from their homes, millions more who have lost loved ones and all of whom wish for nothing more than an end to the war.