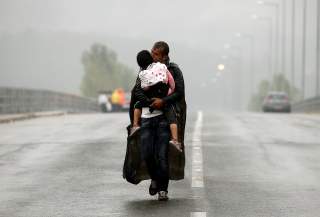 Now that the four-year operation to reclaim territory in Iraq and Syria from the Islamic State is complete, long-term planning that could allow millions of Syrian refugees to return to their homeland may well be the next logical step toward stability in the war-ravaged nation.

From 2016 to 2018, only 143,254 Syrian refugees—out of over 6.7 million, including approximately 5.7 in the Middle East and another 1 million in Europe—returned to Syria. As the Syrian civil war winds down, the question looms: can its refugees return home?

If the Syrian situation is like other situations around the world historically, it may well be many more years that Syrian refugees will be living displaced. The United Nations finds that it takes an average of twenty-six years for refugees to return home in protracted situations. Total numbers of displaced people globally keep increasing, with them living in long-term limbo that can last decades. There are now sixty-nine million forcibly displaced people globally, the highest number of displacements on record.

In addition to a resolution of conflict in Syria, a lot of other things would need to go right in order for Syria’s refugees to go home. A survey by the International Organization for Migration of Syrian internally displaced persons who had returned home found that key considerations for returns were: property, job opportunities, security and social considerations in their host countries.

In focus groups of Syrian refugees for our RAND studies, Syrians express desire to return to their homes and rebuild their country. However, circumstances must be in place for this to happen. Most importantly, Syria’s cities would need to be “stabilized.” Our study on stabilization in Iraq after the defeat of the Islamic State suggests that this means ensuring security, availability of housing, public services such as education and healthcare, jobs, and governance and reconciliation considerations. To return, refugees need assurance of personal safety, which requires lack of significant local conflict, not fearing retribution from neighbors with differing political sympathies, removal of explosive hazards, and public order through policing.

This level of complexity in stabilization will not happen on its own in Syria without planning, coordination, resources and negotiation. The very sad reality is that this population of people will not return home any time soon, unless there is significant action by the international community, which would require sustained U.S. leadership. If Syrians have a chance at going home after the war, then planning needs to start now.

At the same time, there are many factors that motivate Syrians to want to return home, should circumstances allow. One such push factor that we found is the sense of precariousness that comes from uncertain legal status while living as a refugee. In the Middle East host countries, Syrians live with various forms of temporary residency that restrict movement, prohibit legal work, and create a general sense of instability. We also found that up to 50 percent of Syrian refugee children remain out of school. Another push factor is political uncertainty over policy decisions of host governments and host country citizen resentment of a large new population that strains public services, changes demographics, and fosters competition in the labor market.

In few circumstances can Syrian refugees in the Middle East envision a future life with abundant legal opportunities.

Active fighting in Syria is dwindling. But Syria remains divided in a frozen conflict and empty peace, unstable and unlikely to attract the investment in reconstruction, public institutions, job creation, and local reconciliation efforts needed to motivate Syrians in large numbers to return home.

Additional emphasis could be placed on planning how these displaced populations would return once parts of Syria are secure enough. Yet such needed planning is not happening. The United States is disengaging, and it is mainly Russia now that is trying to facilitate Syrian refugee returns.

Leaving the 6.5 million refugees in limbo indefinitely is a sorry state for the refugees and also a long-term security and economic risk for the host countries, many of which are U.S. allies. U.S. disengagement from Syrian stabilization and refugee returns—despite Syria being a risky and expensive quagmire—is just letting this fester, perhaps leading to worse future risks in the Middle East and beyond.

Meanwhile, given the realistic likelihood of a lengthy exile for the Syrians, it would make sense to emphasize making the lives of Syrian refugees in the Middle East more stable in their host countries, with greater attention to jobs, education and legal status.

Shelly Culbertson is a senior policy researcher focusing on refugees at the nonprofit, nonpartisan RAND Corporation. She is the author of “The Fires of Spring; A Post-Arab Spring Journey Through the Turbulent New Middle East” (St. Martins, 2016).