Syria's Endgame Is Under Way. Is America Ready? 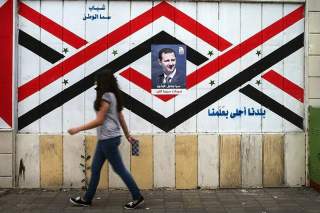 Is the table being set for a grand, realpolitik-based cessation of the fighting in Syria? And does the recent political deal in Lebanon both provide a workable template for a solution?

The first question is whether stars are aligning for any sort of compromise between the key interests of the major outside powers with skin in the game in Syria. For Iran, the paramount interest is to safeguard the so-called Shia crescent, extending westward from Iraq into Syria and Lebanon, and to make sure that Tehran’s lines of communication with its allies are protected. For Turkey, it is to retain influence in the region, protect ethnic Turkmen enclaves and to prevent the emergence of a unified Kurdish entity out of the wreckage of two failed centralized Arab autocracies, which would undermine its control of the Kurdish regions of the Turkish Republic. For the Gulf Arab monarchies, it is containing Iranian influence and defending the interests of Arab Sunnis against a majoritarian Shia government in Iraq and a minority Alawite regime in Syria. Finally, Russia wants to protect its equities in Syria, reemphasize its return to the Middle East as an agenda-setting power, and demonstrate that it can protect its clients from violent overthrow indirectly sponsored and supported by the United States. If Bashar al-Assad is still sitting in Damascus the day after President Barack Obama leaves office, Moscow will have won a significant symbolic victory.

As long as each actor was committed to pursuing the maximalist versions of their agendas, conflict was inevitable. It is no longer automatic that “Assad must go,” or that he is on the verge of falling—but while extensive Russian and Iranian assistance can shore up Assad’s position, neither Moscow nor Tehran is willing to pay the price that would be necessary to restore all of Syria to Assad’s control.

Moreover, all the powers do have some common interests. To varying degrees, Islamic State threatens all of their interests. The oil producers have economic interests to try and work together to see if it is possible to push prices back up over $60 a barrel—which will require Russia, Iran and Saudi Arabia to find some sort of workable framework to regulate their output.

Finally, American allies in the region are now much less sure of U.S. commitments and willingness to act. In contrast to the situation a year ago, when Saudi Arabia was much more prepared to push back against the Russian presence in the Middle East and when Turkey, in the aftermath of a downing of a Russian fighter, was looking for reassurance that the United States had its back and was prepared to act more decisively in Syria, regional capitals have been quietly reassessing the balance of power—and determining whether their interests might be better served by starting to cut a series of realpolitik deals.

We have seen all sorts of opening gambits. Russia has several times announced pauses in its air strikes against Aleppo and has appeared to acquiesce to Turkey setting up a small security zone in northern Syria with a corresponding no-fly zone over it. Various corridors that have been opened up around Aleppo appear to be designed not only to let some humanitarian aid into the besieged city, but to provide an opportunity for rebels linked to supporters in the Gulf to evacuate Aleppo and find refuge. For its part, after more than a year of opening the floodgates of its oil production in an effort to cause economic damage to Russia and to punish Moscow for its support of Assad in Syria, Saudi Arabia (along with Qatar) has become much more accommodating to the idea of setting a price floor—in part because the drop in prices has also hit it hard in the treasury as well.

Now, we have the Lebanon deal—which cleared the way for Gen. Michel Aoun to take the presidency at the head of a pro-Iranian/pro-Assad coalition of Maronite Christian groups and Hezbollah, with Saad Hariri, backed by Saudi Arabia, returning to the prime minister’s position. The agreement is expected to clear the way for a reshuffle of the Lebanese government in a way that will protect and lock in Hezbollah’s position—and thus Iran’s equities—in Lebanon, while protecting Saudi interests. The deal comes after two years of deadlock, where Sunni interests held out for an anti-Hezbollah presidential candidate while Hezbollah fought to keep Hariri from returning to power. It is a fragile power-sharing arrangement—but one that could survive if both Iran and Saudi Arabia are prepared to live with the compromise.

What might then emerge in Syria? If the anti-ISIS operation is successful in Mosul, and this then presages a final assault on the group’s headquarters in Raqqa, there will need to be some framework for the day after. This refers to what happens to the Sunnis of these areas. Their subjugation under a Shia-dominated regime in Baghdad or attempting to reimpose Assad’s control are not viable options—and ones that the Sunni Arab monarchies will continue to resist. Some degree of federalization in Iraq is absolutely essential. Otherwise the clock will be reset to the situation as it stood in 2014: simply waiting for the next incarnation of the Sunni resistance to take form.

In Syria, this process would have to be much more haphazard and informal, but the outlines are there: a continuation of an undeclared and unformalized Kurdish self-governance in those parts of Syria where they are the ethnic majority, and the emergence, under Turkish and Gulf sponsorship, of a “non-Assad” part of Syria that agrees not to contest Assad’s continued control of western Syria and token supervision of the Kurdish areas (to satisfy Turkish concerns) in return for effective autonomy. Perhaps this might be accompanied by the creation of a largely pro forma government of national unity that will retain Syria’s state identity within its current boundaries. As in Bosnia after the Dayton Accords of 1995, we would expect a certain degree of voluntary resettlement as people moved to regions under the control of their preferred ethnic or sectarian group. Perhaps then conditions for Assad’s personal departure from power might be on the table, if there were guarantees in place that Assad’s resignation would not lead to regime change.

However, before this happens, there must be a denouement of the situation in Aleppo. The opposition is trying a last-ditch effort to break the Syrian regime’s siege and establish that it can continue to challenge the regime. In turn, Moscow seeks a “victory” in Aleppo that would provide Russia with the opportunity to present the United States with a fait accompli and to negotiate from a position of greater strength.

Could this happen? Much depends on whether the restored but fragile Russia-Turkey dialogue can endure. It also requires Saudi Arabia and Iran to accept that their geostrategic competition across the Middle East requires a higher degree of regulation, based on compromise.

Finally, if by January 2017 we see movement in this direction occurring in Syria, what will be Washington’s reaction? These developments are occurring largely without American input and without American authorship. Would this kind of jury-rigged settlement in Syria be accepted by the new administration, particularly if it left Assad in place (at least for the time being)? Or would the United States work to prevent a deal that effectively ratifies that Russia is again a regional player and that Iran cannot be “contained”?

An endgame is underway in Syria—but whether this presages the end of the match remains to be seen.