Taiwan Is Back on the Geopolitical Menu 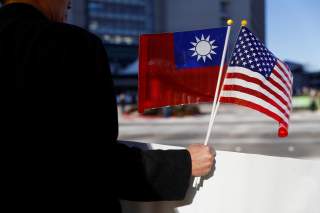 As Asia's international relations digest the significance of the Trump-Kim Singapore Summit, Taiwan has returned as a point of contention between the People's Republic of China (PRC) and the United States. As a result, relations between Beijing and Taipei are frosty and will likely get worse before they get better.

For its part, the PRC regards Taiwan, also referred to as the Republic of China (ROC), as a breakaway province which will eventually be reunited with the mainland. The current government in Taiwan has its roots in the end of the Chinese civil war (1945-1949) when the Nationalists (Kuomintang or KMT) retreated there after being defeated by the Chinese Communist Party (CCP). Although Taiwan remained in opposition to the PRC, it adhered to the idea of eventual reunification with the mainland, in that there was "one China." The one China framework allowed Beijing and Taipei to live with the idea that they could co-exist until the day was reached when both parties would find reunification mutually attractive. At the same time, the message from the PRC has been consistent – military force would meet any attempt by Taiwan to become an independent country.

What helped maintain Taiwan's functional independence vis-à-vis China was the support provided by the United States. Although the U.S. opted to diplomatically recognize Beijing as the de jure Chinese state over Taiwan in 1979, it maintained a strong relationship with the ROC, including the sale of weapons and occasional naval support. At the same time, Taiwan's political system gradually changed from a dictatorship into a representative democracy, which was marked by the island's first legislative elections in 1992. The first direct presidential elections were held in 1996, and in the 2000 presidential contest, Taiwan underwent its first peaceful transfer of power from the Nationalists to the opposition Democratic Progressive Party (DPP). From that point forward, Taiwan held regular elections with peaceful transfers of power in 2008 and 2016.

In the 1980s and 1990s, Taiwan also developed into a highly competitive and export-driven “Tiger” economy, alongside Singapore, Hong Kong and South Korea. The mainstay of the economy centered on electronics, machinery and petrochemicals. Trade also developed with mainland China. Despite their political differences, trade expanded between the PRC and ROC. Additionally, Taiwanese capital flowed into the mainland and tourists flowed between the island and mainland.

Three things have changed the dynamic of China-Taiwan-U.S. relations and made the island-state a more significant geopolitical flashpoint. First, the 2016 elections brought change into the China-Taiwan relationship. The winning candidate was the DPP candidate, Tsai Ing-wen, the island’s first woman president. The PRC preferred the KMT candidate (who seen as more pro-China) and was apprehensive of Tsai due to her views on Taiwan’s status. Although she vowed to maintain the cross-strait relationship followed by previous governments, the mainland is suspicious of Tsai and concerned about her willingness to discuss the issue of Taiwan’s future relationship with the mainland with all levels of Taiwanese society.

The second development has been the emergence of an autocratic government in the PRC and its newfound goal of making China the foremost among nations. The Chinese strongman Xi is asserting Beijing's authority further afield, which includes making the South China Sea its strategic backyard. At the same time, Taiwan remains as a reminder of the past in which China was a weak country, unable to fend off Western European powers and Japan. Moreover, Taiwan is also the last part of China not reunified with the PRC's mainland, with Macau and Hong Kong having earlier been brought back into the fold. Furthermore, another aspect of this is that Taiwan represents a political threat to President Xi's autocratic rule. The reason is that, unlike the PRC, Taiwan has evolved into an elective political system with a free press, multiple political parties and a tradition of peaceful transfers of power from one party to another. This is entirely anathema to President Xi and his court.

Since President Tsai has been in office, China has put greater pressure on Taiwan. This has included frequent military exercises in the neighborhood and an escalation in cyber-attacks. According to Chien Hung-Wei, director-general of the cybersecurity department under the Executive Yuan, Taiwan's ruling cabinet, the island-state's government departments are bombarded by tens of millions of hacking attempts each month. Additionally, the number of "high-impact incidents" which include targeted attacks aimed at stealing sensitive government data and personal information has tripled from four to twelve in 2017. The PRC has also been aggressive is seeking to reduce the number of countries that still recognize Taiwan as an independent state.

The third development is the Trump presidency, which wants to level the playing field with China. Although the U.S. president has emphasized his personal relationship with President Xi, the U.S. and China are increasingly locked in what many now see as a new Cold War. Trade relations have become acrimonious and are likely to get worse. At the same time, America is not pleased with China's consolidation of its military position in the South China Sea, the expansion of its military overseas, and its penetration into Latin America and the Caribbean. Indeed, the U.S. in 2018 has been more outspoken about China's penetration of the Caribbean, especially after Beijing's successful wooing of the Dominican Republic to shift its diplomatic recognition of Taiwan for a more fulsome embrace with the PRC in May 2018.

In this context of shifting geopolitics, the Trump administration has been willing to upgrade the importance of Taiwan. This does not mean that Washington will move to recognize the island as an independent country, but it has allowed weapons sales and pushed for more intercourse between government and political leaders from both countries—a move embodied in the Taiwan Travel Act signed in March 2018. Moreover, from a legal standpoint, there is nothing to prohibit President Tsai from visiting the United States. Additionally, in June America opened a new $255 million de facto embassy in Taipei (referred to as the American Institute).

For the Trump administration, Taiwan also has considerable value in reminding the PRC that the United States is still engaged in Asia. In many regards, Taiwan functions much as Cuba did for the Soviet Union during the Cold War, a subtle reminder for Washington that Moscow had an ally in the U.S. backyard. At the same time, U.S. creditability is linked to support for Taiwan with an eye to the rest of the region, especially those countries concerned about the rise of Chinese power. Finally, U.S. policy toward China has become more assertive as reflected by President Trump's gambit with North Korea. In a sense, as Washington and Beijing compete for influence in North Korea, it has brought back into focus the geopolitical importance of Taiwan as a U.S. ally.

In the event of an actual war, it is questionable whether America could win, considering the distance it would have to project its power, the closeness of the mainland to Taiwan and the growing sophistication of the PRC armed forces. However, U.S. military involvement, fighting alongside the Taiwanese military, could make any PRC military action too painful to consider. This preserves Taiwan as a functioning democracy and maintains the U.S. as a valuable ally in a region set for more changes in the structure of its international relations.

Looking ahead, Taiwan provides a thorny problem for President Xi. The island's democratic form of government is not compatible with the PRC's, and its alliance with the United States makes the military option of a forced reunification potentially very painful. Yet the longer Taiwan enjoys its political freedoms, and its economy continues to work, there is a risk that ties that bind the "one China" framework together diminish to the point that the Taiwanese may be willing to risk a declaration of independence. That at least is the nightmare scenario that mainland Chinese leaders face and it is questionable that any head of China would politically survive after letting such a declaration go unanswered. There are no easy solutions to Taiwan's future, but as long as the United States remains a steadfast ally and the independence card is not played, the status quo will hold up.

Scott B. MacDonald is the chief economist at Smith's Research & Gradings. The views expressed here are his own.

Image: A demonstrator holds flags of Taiwan and the United States in support of Taiwanese President Tsai Ing-wen during an stop-over after her visit to Latin America in Burlingame, California, U.S., January 14, 2017. REUTERS/Stephen Lam