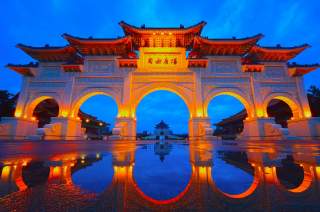 Panama on Tuesday severed diplomatic relations with the Republic of China (Taiwan) and established official ties with the People’s Republic of China, in a move that is as much part of Beijing’s efforts to isolate the democratic island-nation as a logical extension of its global economic policy.

The move hardly came as a surprise, occurring after a year of major infrastructure investments by China—estimated at $1 billion—in the Panama Canal and promises of assistance by Beijing to turn the Panama into a major transit route for Chinese goods into Latin America. A handful of state-owned Chinese firms are also rumored to be eying bids for land development around the Canal. China is the Canal’s second-largest user, and in a move rife with symbolism, one of its cargo vessels was the first to transit the canal after completion of an expansion project last year.

Major infrastructure investment abroad is part of Beijing’s One Belt, One Road strategy to gain access to foreign markets while strengthening its diplomatic influence. Several countries in Southeast Asia, Latin America, Europe and Africa have been seeking alternatives to World Bank and International Monetary Fund assistance with infrastructure loans and investment, and Beijing has been more than happy to provide those—minus the conditions on good governance that normally come with loans from Western institutions.

A number of Taiwan’s twenty remaining official diplomatic allies fall in this category, and their willingness to maintain official ties with Taipei often has been contingent on the continuation of a parasitical relationship. In December, the small African nation of São Tomé and Príncipe severed diplomatic ties with Taiwan after Taipei refused to disburse as much as $200 million in financial assistance, a demand which the African nation had made, in the form of a blackmail letter sent to the office of Tsai Ing-wen soon after her election.

Although it is one of the world’s twenty largest economies, Taiwan cannot hope to compete with China in the financial battle for diplomatic allies, which had ended during the period of “diplomatic truce” under former president Ma Ying-jeou of the China-friendly Kuomintang.

Cross-Strait politics was also very much part of China’s decision to snatch Panama, which in 2009 had been turned down by Beijing due to the aforementioned “truce.” Following the January 2016 election of Tsai Ing-wen of the Taiwan-centric Democratic Progressive Party, Beijing has tightened its pressure on Taipei to acknowledge the “one China” principle and the so-called “1992 consensus,” a construct which Beijing has used as a precondition for dialogue between the two sides. Backed by a population that has no intention to give in to such demands, President Tsai—who visited Panama in June 2016 as part of her first foreign trip as head of state—has been able to stand firm on the matter while continuing to seek constructive relations with China.

Absent a working Taiwan strategy, Beijing has ramped up the pressure to isolate Taiwan internationally, resulting in Taiwan’s being denied access to multilateral forums such as the World Health Assembly, the International Civil Aviation Organization and Interpol, among others. There is the high likelihood that two or three other official diplomatic allies could be stolen from Taiwan before the end of the year.

Such pressure on Taiwan plays well to a domestic audience in China, and helps deflect some of the pressure on President Xi Jinping by hardliner elements within the Chinese Communist Party who argue that Xi has not been “hard enough” on Taiwan. No doubt such actions help boost his image in the lead-up to the nineteenth Chinese Communist Party Congress later this year but remain limited enough to avoid completely derailing the delicate balance that has been struck in the Taiwan Strait since Tsai’s inauguration.

Although headline-grabbing, Beijing’s tactics have only succeeded in alienating the Taiwanese public and fostering a deeper sense of separate identity. While the loss of an official diplomatic ally is sure to cause some domestic pressure on President Tsai, the Kuomintang argues that it is better equipped to deal with Beijing and willing to accommodate China on matters such as the “1992 consensus.” These developments are unlikely to translate into substantial pressure on Tsai’s administration.

The loss of Panama (and any future ally) carries symbolic—and perhaps psychological—implications, but it does not in any way undermine Taiwan’s ability to function as a sovereign state. In fact, substantial—albeit unofficial—relations with major economies like the United States, the European Union, Japan and the many countries targeted by Taiwan’s New Southbound Policy is what underpins Taiwan’s resilience. As long as this international support continues, Taiwan will have no difficulty weathering the loss of small, even if official, allies. None of Taiwan’s official allies, and perhaps no combination thereof, are key to Taiwan’s survival, which undermines the ability of Beijing to use diplomatic theft as a means to coerce the Taiwanese into submission. Moreover, we should also note that the closing of Taiwan’s embassy in Panama by no means signifies that Taiwan will no longer be able to conduct business with Panama or move goods through the Canal; thus, even the economic impact of Tuesday’s developments are likely to be marginal.

This was reflected throughout the day in Taiwan’s calm reaction to the news about Panama. Pragmatism and resilience characterized most of the reactions. Some of Taiwan’s rambunctious evening talk shows didn’t even open their programs with Panama, focusing instead on the death of a filmmaker in a helicopter crash at the weekend.

President Tsai, meanwhile, delivered an uncharacteristically combative statement that was sure to resound with a majority of her constituents, who also have accused her of being “too soft” on China in the past year.

“Coercion and threats will not bring the two sides closer. Instead, they will drive our two peoples apart. On behalf of the 23 million people of Taiwan, I declare that we will never surrender to such intimidation,” Tsai said.

“It is true that for a long period of time, Taiwan's international situation has been difficult,” she continued. “It is also true that pressure from the other side of the strait has never stopped. But the less favorable our situation is, the more resolute we must be in upholding our belief in freedom and democracy. We must stand together and ensure that Taiwan's 23 million citizens continue to determine our own destiny.”

“As president, my greatest responsibility is the protection of our national sovereignty,” Tsai said. “Greater challenges will only bring greater resolve. Our confidence as a people should not, and will not, be easily defeated. We will endure.”

J. Michael Cole is a Taipei-based Senior Fellow with the China Policy Institute, University of Nottingham, UK, an associate researcher with the French Center for Research on Contemporary China (CEFC), chief editor of the Taiwan Sentinel and project manager for the Taiwan Foundation for Democracy’s Taiwan Democracy Bulletin.