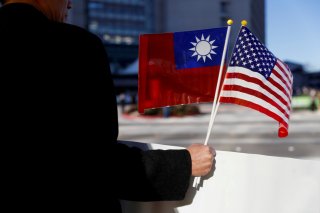 Despite widespread claims that global democracy is on the decline, Taiwan has shined as a beaming example of democratic resilience against an increasingly assertive China. More than ever, the people of Taiwan see themselves as holding a uniquely local identity, resisting attempts by the Chinese Communist Party to “liberate” the island into its fold. As Taiwan’s most crucial global partner, the United States has a duty to support and assist Taipei in maintaining its prosperity against malign threats and in opposing Beijing’s attempts to exert undue influence on the populace. One would think this would be an easy bipartisan cause for policymakers in Washington to get behind. Unfortunately, this is not always the case.

Amidst increased U.S.-China competition, championing Taiwan has allowed lawmakers to score easy points with relatively low costs. It is time they back it up. In spite of being one of the few areas of apparent bipartisan cooperation, practical and effective policymaking towards Taiwan has been slow and, in many cases, inconsequential.

In the 117th Congress alone, nearly twenty bills directly pertaining to Taiwan have already been introduced, however, none have yet passed through either chamber. The majority all remain near single digits of co-sponsorship, with the lone outlier being Representative Young Kim’s bill calling for a strategy to assist Taiwan in regaining observer status to the World Health Organization, a proposal which has so far secured 119 supporting members. Far too often it seems as though lawmakers are looking to push headline-grabbing strategies but failing to take the action necessary to move beyond the starting steps.

There have been some effective exceptions such as the TAIPEI Act of 2019, which was introduced by former Colorado Republican Sen. Cory Gardner. The act aims to strengthen and support Taiwan’s diplomatic and international recognition, though for now its passage seems to be the exception rather than the norm and it remains to be seen just how the United States will act to further implement the new law’s designs.

Of the pending legislation, there is an assortment of seemingly straightforward steps that should be taken to bolster ties and to illustrate that support for Taiwan will not be overlooked. Representative Brad Sherman’s Taiwan Diplomatic Review Act, for example, calls for negotiations to rename Taiwan’s-pseudo embassy (currently referred to as the “Taipei Economic and Cultural Representative Office”) and for a formalization of the United States’ representative in Taipei to a Senate-confirmed position.

Though steps such as these will cause a furor in Beijing, they are a means of reinforcing the position that the United States does not see Taiwan as a second-class companion and that it deserves similar recognition to that of other international partners and allies regardless of its complicated diplomatic status.

Historically, it has been Congress, both through Democrats and Republicans, that has been the premier advocate of Taiwan within the United States. This trend must continue. With that said, it is not Congress alone that needs to act, and the executive branch must broaden support as well.

In early April, Secretary of State Antony Blinken stated that the United States has “a serious commitment to Taiwan being able to defend itself,” and that “it would be a serious mistake for anyone to try to change that status quo by force.” Statements such as this are encouraging, but despite recent comments by Adm. Phil Davidson, the former head of U.S. Indo-Pacific Command, that “consistent arms sales to Taiwan are critically important,” for many administrations, the process has often been more complicated. This stems from concerns that more outward support could ruffle too many feathers in Beijing given ambiguities in long-standing policy where the United States has often attempted to prioritize relations with China while still showing “unofficial” support to Taiwan.

Major sales, including F-16 fighter jets, were completed under the Trump administration, but often the hardware supplied inadequately meets the strategic designs that should be implemented to more effectively blunt a Chinese attack. This is frequently due to a combination of both U.S. politicking and Taiwan’s defense establishment looking to showcase flashy armaments, though it regularly results in Taiwan getting less effective bang for more bucks.

Leading officials including the National Security Council’s Indo-Pacific Coordinator Kurt Campbell likewise echoed long-standing U.S. policy in early July that the administration does “not support Taiwan independence,” but still desires a “strong unofficial relationship.” Comments such as these may reassure Beijing that the United States is not pulling a policy reversal and is looking to recognize Taiwanese independence, however it should be followed up with actions to demonstrate to Taipei that they will not fall by the wayside. One framework already in place to address this can be through the U.S. State Department’s April announcement of new guidelines which would allow American and Taiwanese officials to meet more officially including in Federal buildings. Future invitations for high-level Taiwanese officials such as those working on foreign affairs and national security will communicate that the United States takes the matter of Taiwan’s defense seriously and does not feel the need to downgrade dialogues to appease Beijing.

Further, in June the United States announced it would be holding its first high-level trade talks with Taipei since 2016, in hopes of firming up to the two nation’s trade ties and to likewise ensure the Chinese government cannot use its economic heft to coerce the island. While this symbolizes a productive first step, officials should earnestly look to pursue a full-on free trade agreement with Taiwan, which as of 2020 stood as Washington’s ninth-largest trading partner. Despite recent hesitancy in the United States for pursuing large-scale free trade agreements and similar concerns domestically in Taiwan, completing a deal with Taipei would not only bolster bilateral relations but potentially encourage other like-minded countries to expand their trade relationships as well.

One of the earliest shining accomplishments of the Biden administration is that its multilateral approach has helped encourage allies to more publicly state their desires for cross-strait stability and Taiwan’s security. This included Japan’s State Minister of Defense Yasuhide Nakayama’s recent comment that “we have to protect Taiwan as a democratic country.” Even South Korea, which has often taken a more careful path when discussing sensitive issues relating to China, saw President Moon Jae-in in a joint press conference with President Joe Biden state, “ We’ve shared the view that peace and stability in the Taiwan Strait are extremely important.” The administration will need to continue to build off this success and work towards further integrating strategy for Taiwan’s security into regional coalitions and defense.

Backing Taiwan should not be for the purpose of scoring easy points or demonstrating one’s credentials as a China hawk. As the island finds itself increasingly isolated on the international stage, the United States should act to demonstrate support and to show that it will not look the other way when partners and allies are in need.

Joe Bauer is a graduate student in International Economics and China Studies at the Johns Hopkins University School of Advanced International Studies in Washington, D.C.